Dark magic, can take the youth also beauty of women by absorbing their life energy, shape-shifting, can only be killed by the "Fairest of Them All", can create monsters and soldiers magically made of obsidian stones, potions and artifacts including the Magic Mirror

Kill Snow White, be the most beautiful woman in all the land, rule the kingdom of Tabor and many more lands for all of eternity (all failed).

She was portrayed by Charlize Theron, who also portrayed Aileen Wuornos in the 2003 film Monster.

Ravenna, also known as the Evil Queen which is the same name of the evil monarch from the legend of Snow White she is based on, is the selfish and tyrannical ruler of Tabor, who learns that her stepdaughter, Snow White, is destined to surpass her as the "Fairest One of All". However, upon learning that the only way to remain in power is by consuming Snow White's heart, Ravenna recruits a Huntsman to capture and kill the young princess in exchange for his freedom, and presumably, using her own magic to resurrect his lost wife from the dead which is but a lie. She had a younger brother, Finn and a younger sister, the mysterious ice queen Freya.

Ravenna is the daughter of an unknown sorceress whose home village was ravaged by a peasant king and found her way to the dark side by using unholy magic that her mother also practiced. At a young age she was abducted by a vicious master and the only power she wielded was her incredible beauty. Her brother, Finn, was her only ally and she used her beauty to seize multiple kingdoms. Ravenna's mother had given her a special enchantment to protect her from time, however she is forced to devour the life-force of young maidens. To become truly immortal Ravenna must consume the heart of Snow White the moment she becomes fairest in the land.

Ravenna has said that she has "lived many lives", meaning she was much older than she looked by the time of Snow White and the Huntsman. It appears she extended this enchantment to her younger brother and sister. Before taking Tabor, Ravenna seduced another King with her beauty and took her place as his Queen. One evening, when they were playing chess, Ravenna murdered the King and took his Kingdom. At the time, at least her younger sister was living with her, and they both attended the King's funeral. At the funeral, Ravenna noticed Freya smiling at the Duke of Blackwood and realises that they were lovers. Ravenna later tried to tell her sister to leave the Duke because he was already engaged to another, and that he would leave her but she also tells her that she was carrying a child. Freya left the room, telling Ravenna that she did not know all and that the Duke would not leave her.

Freya later gave birth to a baby girl, but one evening, Ravenna asked the Magic Mirror who was the fairest in all the land. The mirror told her that she was, but that her sister's daughter would one day be even more beautiful than she was. Ravenna then tricked her sister into leaving the castle and then cursed the Duke of Blackwood to kill the child. When Freya returned, she was so grief-stricken, and with the belief the man she loved did this, revealed her ice powers and killed the Duke before collapsing into Ravenna's arms. Freya later left the Kingdom.

After the death of Snow White's mother, Queen Eleanor, her father, the Queen's widowed husband. King Magnus, became inconsolable. Taking advantage of his grief, he fought into battle and defeated an invading Dark Army of glass soldiers, then rescues a woman held captive from the Dark Army, who reveals her name to be Ravenna. King Magnus becomes so enchanted with her beauty, that he forgotten his broken heart for the first time and marries her the next day.

Just before the couple could consummate their marriage, Ravenna, who is in fact a powerful sorceress and the Dark Army's master, kills Magnus on their wedding night and usurps control of the kingdom. Snow White's childhood friend William and his father Duke Hammond escape the castle but are unable to rescue her, and she is captured by Ravenna's brother Finn, and locked away in the north tower of the castle for many years.

Tabor is ruined under Ravenna's rule as she periodically drains the youth from the kingdom's young women in order to maintain a spell cast over her as a child by her mother which allows her to keep her youth and beauty. When Snow White comes of age, Ravenna learns from her Magic Mirror that Snow White is destined to destroy her unless Ravenna consumes the young girl's heart, which will make her immortal. Ravenna orders Finn to bring her Snow White, but she escapes into the Dark Forest, where Ravenna has no power. Ravenna makes a bargain with Eric the Huntsman, a widower and drunkard, to capture Snow White, promising to bring his wife back to life in exchange.

The Huntsman tracks down Snow White, but when Finn reveals that Ravenna does not actually have the power to do what she promised, the Huntsman fights him and his men while Snow White runs away. When the Huntsman catches up with her, she promises him gold if he will escort her to Duke Hammond's castle. Meanwhile, Finn gathers another band of men to find her, and Duke Hammond and his son William learn that she is alive. William leaves the castle on his own to find her, joining Finn's band as a bowman.

Halfway to Duke Hammond's castle after the recent demise of her brother Finn, Ravenna shape-shifts as William and tempts Snow White into eating a poisoned apple, but is forced to flee when the Huntsman and William discover her. William kisses Snow White, whom he believes to be dead. She is taken to Hammond's castle. As she lies in repose, the Huntsman professes his regret for not saving Snow White, who reminds him of his wife, and kisses her, breaking the spell. She awakens and walks into the courtyard, and rallies the Duke's army to mount a siege against Ravenna.

The dwarves infiltrate the castle through the sewers and open the gates, allowing the Duke's army inside. They confront Ravenna, who conjures a rain of glass shards to kill them, and creates indestructible glass monsters from it after it fails. While the Duke's army is keeping the monsters at bay, Snow White battles Ravenna, but is overpowered. Ravenna is about to kill Snow White and consume her heart. Unfortunately, she faced her downfall when Snow White stabbed her heart for what she did to her father for tyrannizing and killing her people within the land.

Ravenna is resurrected by Freya seven years later when Freya took the Magic Mirror in which Ravenna was kept in. Ravenna first thought was to take back Tabor and kill Snow White. She wanted to do this with the help of Freya and her Huntsmen.

Not long after, when Freya was meeting with new children to train into Huntsmen, Eric returned and tried to kill her. The arrow was stopped by Ravenna, which shocked Eric because he believed she was dead. Ravenna tried to kill Eric but she was stopped by Sara, who was Eric's wife. Ravenna asks her sister what ruling her laws would give Eric and Sara for trying to kill her. Freya says death. However, Eric and Sara managed to get the Huntsmen to side with them against her and Freya. When Freya wouldn't fight back and hurt those that she "raised", Ravenna took over and started attacking them alone. However, Freya decided to help the Huntsmen and raised an ice wall to stop Ravenna being able to get to them. The two argue, and Ravenna says something that makes Freya question what happened to her daughter. Revealing that since she brought Ravenna back to life by means of the mirror, Ravenna was therefore tied to it, Freya asks Ravenna/The Mirror what really happened and she discovers the truth about Ravenna cursing the Duke of Blackwood to kill her daughter because she was told that she would one day be more beautiful than her. Angry, Freya and Ravenna fight. Ravenna then tells Freya that she is still stronger than her and throws Freya to the floor. Freya then tried to kill Ravenna by holding her and using her powers, but just when Ravenna was about to be stopped, Eric returned and shot Freya in the back with an arrow in the hope it would also hurt Ravenna. It did not, and while Freya was lying on the floor dying, Ravenna fought with Eric. Freya then used her ice powers to tell Eric to shatter the mirror, which he does, killing Ravenna again.

Ravenna is an extremely powerful sorceress, though it was mentioned by Finn (and later proven) that excessive usage of her powers would cause her to age, which she combated by stealing youth from others. However, after her resurrection, Ravenna did not seem to suffer from this weakness anymore, and her magical powers appeared to be inexhaustible, which could probably be attributed to her new status as an entity of the Magic Mirror.

Examples of the most notable abilities she displayed were: 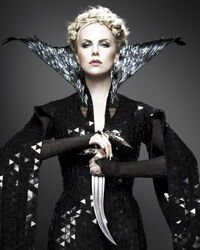 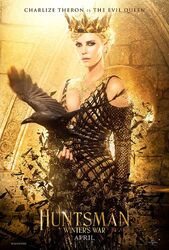 Ravenna in The Huntsman: Winter's War
Add a photo to this gallery

Retrieved from "https://villains.fandom.com/wiki/Queen_Ravenna?oldid=1458853"
Community content is available under CC-BY-SA unless otherwise noted.