Queen of the Spiders

Produce ever-increasingly aggressive young so as to ensure her species spreads and conquers the Earth (failed).

Predatory Monarch
The Queen Spider is the secondary antagonist of the 1990 horror film Arachnophobia. She was produced by the General Spider and a common female house spider. She is part of the abnormally aggressive brood of spiders that would invade the setting of the film and seek to wipe out all other life-forms.

The Queen Spider was largely unseen for most of the movie and her role was also one of the more passive as she was responsible for building the second nest, helping to raise the young and teaching them how to spread and survive. She and the other spiders were abnormally aggressive due to the General Spider's influence, which made them seek to not just survive as a species but also actively work to eradicate any competing life-forms (including humans).

The Queen Spider would come into conflict with the main cast when she mated with The General and created a second nest, while the General Spider was largely responsible for ensuring the nest was protected the Queen Spider also had a similar role and thus when the nest was found she took to arms in defense of her young.

She would be killed in the resulting conflict, sparking the General Spider to go into a murderous rage to avenge his second mate (as well as his species, since without her there's a strong possibility they would go extinct). 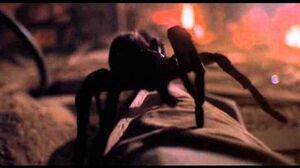