Awaken Dagoth and use his divine power to rule the world (failed).

Tyrannical Witch
Queen Taramis is the main antagonist of the Conan the Destroyer, the 1984 sequel to the 1982 film Conan the Barbarian. She is the Queen of the City of Shadizar and a prime worshiper of the Dreaming God Dagoth.

She was portrayed by Sarah Douglas, who also played Ursa in the Superman films.

In the film, Taramis plans to bring Dagoth (who is currently a statue, in the form of a handsome man inside Taramis' palace) back to life in a ritual that involves obtaining a jeweled horn and the sacrifice of her virginal 16-year-old niece Princess Jehnna. Rather than undertake the perilous journey to recover the Horn of Dagoth herself, while Taramis decides to hire Conan and his group of adventurers into helping Jehnna find the jeweled horn. To ensure of Conan's cooperation, Taramis, revealing to be a powerful sorceress, promised to resurrect Conan's dead lover Valeria (who was killed by the late and infamous wizard Thulsa Doom) if he would do it for her.

Conan agreed to the deal. To ensure that Conan must succeed on the mission, Taramis sends in her chief guard Bombaata to go with him; however she secretly tells Bombaata to kill Conan and his friends once they find the Horn of Dagoth, revealing that she has no intention to fulfill her side of the deal to Conan. During the groups' journey, she secretly sends in several of her soldiers to sabotage them. As the group entered a temple and finally obtain the horn from it's altar safely with Jehnna holding a magic jewel and clearing away the flames inside a dragon statue's mouth, Conan's wizard friend Akiro soon learned of a dangerous prophecy from the temple walls inscribed with the legendary Scrolls of Skelos that the Horn is the source of Dagoth's power and if the horn were to be restored back to the statue, it will unleash its great evil to the world that can never be controlled, and a catastrophe would befall all.

During battle between the group and several of Dagoth-worshipping soldiers led by their high priest (who is a wizard himself), Bombaata stole the horn and brought it back to Shadizar, along with Jehnna, who was given a drug in her drink to make her more susceptible to her aunt's commands. As the sacred ceremony within the royal palace of Shadizar finally started, Conan and his friends (having survived the sabotage) arrived back in the palace and killed Bombatta and several of the guards. Zula, a female warrior whom Conan befriended, interrupted the ritual by throwing her spear at Queen Taramis' grand vizier before he could sacrifice Princess Jehnna.

Unfortunately, because of this improper sacrifice, Dagoth came to life, but as a bloodthirsty, and rampaging beast. Horrified to see her beloved god as a monster, Taramis is killed when Dagoth impales her on the chest with his forehead horn. Following Queen Taramis' demise and Dagoth's death at the hands of Conan, the kingdom of Shadizar is taken over by the newly-crowned Queen Jehnna, with her own royal court comprised of Zula the new captain of the guards, Akiro, the queen's advisor, and Malak, the court jester. 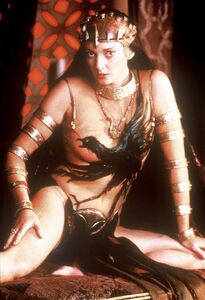 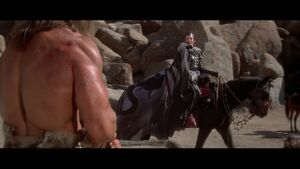 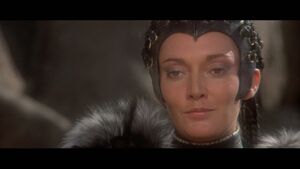 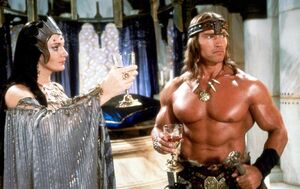 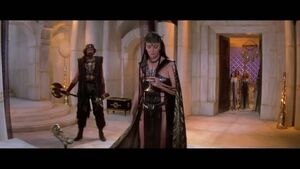 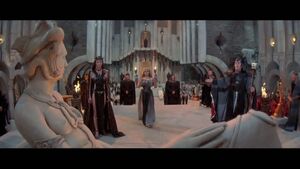 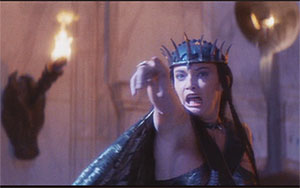 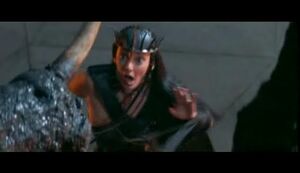