Become one with Lavos (succeeded).

Queen Zeal is the queen of the Enlightened Ones, a magical people of antiquity and the secondary antagonist in the videogame Chrono Trigger. Queen Zeal is a boss of the game, and mouthpiece of Lavos, the game's central antagonist.

In Antiquity, Schala suspected her mother had gone mad, while her brother, Janus, states she has changed and is no longer their mother. Stories from the Enlightened Ones state that the Queen was once a kind and fair ruler, but after her husband died, she poured herself into her research and eventually became obsessed with it. Lavos itself seems to have been the thing that is corrupting her, either psychically or through some form of radiation which had warped her brain. Either way, when encountered, Queen Zeal had already started to become an avatar of Lavos. She appears to have no qualms about sacrificing Schala's safety in order to awaken Lavos. The Queen offers Schala the chance to either stand with her or against her, which is more than she has ever offered anyone else - indicating some small part of her still empathized with Schala, but one she was fully prepared to ignore if her plans for Lavos were opposed. When fully warped by Lavos, Queen Zeal is a literal cackling villain, haughty and deranged. After Queen Zeal's death, Gaspar, the Guru of Time, states her soul is at peace in death - free from Lavos' influence.

Antiquity is the time in between the stone-age, but long before the dark ages. During this era, a few people discovered invention and magic and did not shy away from either. They were feared for their insights and to escape their primitive peers, the enlightened among mankind began pooling their knowledge, resources, and magic to create floating cities in the skies, far removed from common-man. This would come to be known as the Kingdom of Zeal.

The people of Zeal, calling themselves The Enlightened Ones, became engrossed in their every day experiments and innovations. While the rest of the world still lived in caves as the Earth-Bound and frequently starved, died young, and dealt with savage wildlife, the people of Zeal lived in their luxurious and well-insulated cites in the sky. Those in Zeal unable to use magic were sent down to live with the Earth-Bound. Some left the Earth-Bound to their hardship out of retribution for when they were feared for their insights, others simply ignored the plight of those bellow them, unable to spend time empathizing when there was always a new innovation to be made.

The Zeal family ruled over this land. Whether the family name came from their attachment to their kingdom, the kingdom had been named after them, or the word "Zeal" just came into existence based around the royal family is unknown, but they were a family of strong mystics, each of whom passed down their knowledge to their kin. Queen Zeal is a member of the royal family of Zeal, who ruled with her husband until his death and bore two children with him, Schala and Janus.

In 12,000 BC, the Enlightened Ones discovered a life form that was deep beneath the planet, an alien, creature which had crashed into the planet years ago, and was in a hibernative state. One of three gurus of the court of Zeal, by the name of Melchior, invented a device called the "Mammon Machine" to tap into the beast to study it. Upon further investigation, the creature's life-force and power were momentous and soon the machine was modified to tap into that power. The Mammon Machine converted Lavos's life-force into energy to siphon to Enlightened Ones' other inventions and it was limitless. The Queen of Zeal took an interest in the Mammon Machine and Lavos, focusing nearly all her time on what a creature that provided limitless energy could mean both for future inventions and conceptually for knowledge of the universe. Melchior had added a security feature to it, where it would only respond to Princess Schala of the Zeal family. Schala was the purest truest person Melchior knew and so, with her as the only one able to activate it, he assumed the power of Lavos would never be abused.

Crono, Marle, Lucca, Frog, Robo, and Ayla all arrive in Antiquity while chasing down the Demi-human mage, Magus across time. Magus had built up a summoning rite to tap into the power of Lavos and vanished when defeated. The party, by then accustomed to the new ability to travel through time, followed Magus through a rift and wound up in Zeal's time period. While searching for Magus, the party discover the Enlightened Ones' civilization. At the time, Queen Zeal had a working theory of achieving immortality through Lavos. With Schala's compliance, Queen Zeal used the machine more and more, not merely as a power source for their technology, but soon in experiments to increase her magic. The Queen had banished the three gurus when they saw the energy harvested was unstable and might ripple out and destroy the fabric of the universe. Queen Zeal used Lavos' power to create time rifts that stranded the Guru's in different time periods. Melchior had been met previously in the present, Belthasar is met in the future, and the third guru, Gaspar, would not be revealed until later as having been sent to the end of time itself.

The Queen has three others in her court essential to her continued use of the Mammon machine and Lavos; The first is Schala - needed to activate the machine, the second is Dalton - commander of Zeal's armed forces, and the final one is a relatively new patron known as The Prophet - who arrived a short time ago, but has had 100% accurate predictions of the future, which the Queen uses to deal with any future threats to her plans. Though Schala has her concerns about her mother and the abuse of Lavos, she ultimately does as she is told, while trying to implore her mother for compassion and caution to divert her off the path of madness. The Prophet warned the Queen that Crono and his friends would try to stop her and so Dalton was prepared to seize them. As the party had previously encountered Lavos and knew it would end the world eventually, they cease their search for Magus, instead trying to stop Lavos from getting to the point where Magus or anyone else like the Queen could wake it. The Prophet forces the party back into the time rift they used to get there and persuades Schala to use her connection to Lavos to seal the portal. Returning to Antiquity to stop Queen Zeal involves going to the future to meet Belthasar, who had invented a time machine called the Epoch. Using the Epoch, the party return to stop Queen Zeal before she unleashes Lavos.

By the time she is encountered again, Queen Zeal has lost all lucidity and there is nothing Schala can do to even curtail her anymore. However, the Prophet is revealed to have been Magus all along - his previous attempts to summon Lavos was actually an attempt to destroy it. Magus would have only stirred Lavos enough for it to destroy him, but the party interrupting the ritual saved his life by throwing him (as well as they) through time instead. When arriving in Antiquity, Magus used his knowledge of the future to pose as a prophet, his service to the Queen, as a smokescreen to try to get to the Mammon Machine to undo the damage the Queen was going to do. The Queen mocks Magus as a false Prophet once she realizes what he is and uses the Mammon Machine to wake Lavos. Lavos quickly overwhelms Lucca, Marle, Frog, Robo, Ayla, and Magus, Crono still has strength however and goes to fight the creature - but Lavos unleashes all its power in a direct blast against Crono. The figure of Crono is overcome in a blinding light and then destroyed. Schala warps everyone she can down from Zeal to the world below to save them as the kingdom of Zeal is devastated with Lavos' power. Schala herself is last seen in front of the Mammon Machine as Zeal crashes into the sea. Queen Zeal, on the other hand, is bathed in Lavos' power, becoming something more.

The party finds Magus is still alive and has the option to either finish him off or forgive him. If Magus is spared, he reveals he is in fact Janus. He had been thrown forward in time to the middle-ages, where he devoted himself to training as a mage to eventually destroy Lavos for destroying his home, corrupting his mother, and separating him from his sister. Assuming Magus is spared, he offers to join the party and help them find Gaspar, who may be able to save Crono. Saving Crono is optional, but canonical.

The main issue is to deal with is Queen Zeal. Lavos' power erupting through the Mammon Machine had infused and warped the Queen's  research facility, the Ocean Palace, into The Black Omen - a floating black temple. Thanks to the Mammon Machine, Queen Zeal does not physically age and has been empowered as resistant to nominal harm. The Queen is prepared to wait the thousands of years she needs to, bathed in Lavos' power, until she can summon forth Lavos in its true form. With the Black Omen as a beacon, Queen Zeal intends to call forth her benefactor, Lavos, to unleash its full uninterrupted power on the world - resulting in a dystopian future on a dying planet. The Black Omen has been rewritten into the timeline as always having existed, appearing in all eras following the Prehistoric Era.

The party may go and fight Queen Zeal in any of the time periods. If the Black Omen is destroyed in one time period, it is deleted in all future ones, meaning if the Black Omen is destroyed in Antiquity, all the other versions vanish. But if first fought in the Future and then worked backwards through time, the party can get stronger and stronger by defeating Queen Zeal multiple times. In the tower, the Queen has lost all pretense of humanity and attacks, at first in her natural form, but later as a floating head and hands, mutated by her fusion with Lavos' power. Defeating the Queen stops the immediate threat, but Lavos is still destined to rise one day and turn the world into a dystopia, and so, following the Queen's defeat, the party must go confront Lavos itself. 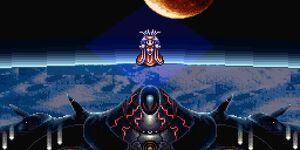 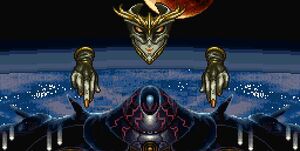 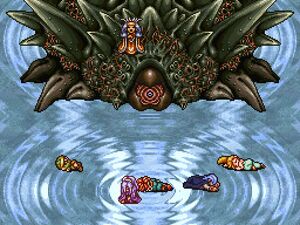 Queen Zeal as Lavos' mouthpiece
Add a photo to this gallery

Retrieved from "https://villains.fandom.com/wiki/Queen_Zeal?oldid=3666447"
Community content is available under CC-BY-SA unless otherwise noted.