Queen of All Monsters

The Queen of All Monsters, also known as the Mother of Monsters, is the main antagonist of AdventureQuest Worlds.

Long before the Eternal Dragon of Time was slain by Galanoth, she reigned supreme over monsters that ravaged the lands of Lore, until 13 heroes defeated her and banished her to the Realm of Chaos, where she was sealed away by dragons using the Elemental Orbs. However, a Chaos Eye amulet was left behind that would serve as a link between its owner and the Queen herself.

She is Drakath's master, who is not mentioned until Doomwood: Part II. It is later revealed that she was once a woman and the creator of the Tears of the Mother, which were shed by her when she was still human. The Tears of the Mother could be used as a cure for Chaorruption.

According to Drakath, the Chaos Eye amulet she left behind was owned by his father, King Slugwrath, before being passed down to him. Through the amulet, she instructed him to have all 13 Chaos seals unlocked in order to free her into the universe once more. It is revealed that in order for her to be free, not only do all 13 Chaos Beasts have to be unlocked, but all 13 Chaos Lords have to be defeated as well.

After being freed by Drakath, she decides she no longer has any need for him and strips him of his Chaos power, and she becomes the new main antagonist of AQWorlds from that moment onward, beginning the second main saga of the game, titled Queen of Monsters: Ancient Evils. 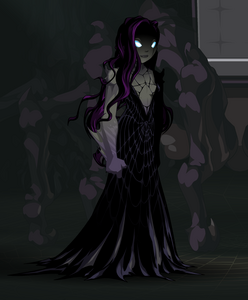