The ability to make monsters of storybook fables real
Immortality

To rule the real world and to live young and beautiful forever as long there is evil in fiction (all failed).

The Queen of Fables is an embodiment of all evil in folklore and an enemy of the Justice League in the DC comics, she is based on the Evil Queen from Snow White and is immortal with great mystical powers, and as an embodiment of evil she likely can never die as long as there is evil in fiction.

The Queen of Fables' was originally a sorceress from another dimension until she was exiled to Earth. She reigned until Princess Snow White defied her and she was trapped in the Book of Fables. Snow White used the book to turn fact into fiction and undo all the Queen's terrible acts.

Unfortunately, countless generations later the Queen was unwillingly released from her prison. She transformed Manhattan into an enchanted forest full of fantastic creatures extracted from folk tales. Then, she realized that Wonder Woman bore a striking resemblance with Snow White. Believing the Amazon Princess to be her daughter, she confronts her, forcing her into a deep sleep in an enchanted forest. Fortunately, Aquaman awakens Wonder Woman with his kiss (As he was once a Prince, and is now the King of Atlantis, it counts as a kiss from a Prince), and Batman discovers the book that the Queen had been trapped in. Eventually, the Justice League managed to stop her, by making her realize that she was no longer immortal and eternally beautiful in the real world, and lock her once more (by trapping her within a book on the United States Tax Code, where she could find nothing imaginative to use as a weapon), undoing her spell again.

Eventually the Queen of Fables awakens and is none too happy. Since being defeated by the Justice League, who placed her in the U.S. tax code manual, she has somehow escaped and now has her sights set on her own Prince Charming, Superman. After transporting Superman to a Kryptonian glass forest, he is able to win his freedom and defeat the Queen (although the effort leaves him weak). She is last seen standing over a young sleeping girl, saying "Sleep well, dear one. Keep me alive. Dream of me. Dream of me".

She returns again after assuming the identity of Laney Kirswell, the film executive in charge of an unauthorized Wonder Woman biography, made mostly of unapproved and slandering materials. She's again able to act in the human world, where she puts Wonder Woman through hellish scenarios, taken from the movie, meant to represent distorted happenings in her life. Diana coaxes her into taking the form of a huge dragon, who she notes is reminiscent of Maleficent, and blinds her with two battle axes, forcing her to flee.

It's heavily hinted that the Queen of Fables is the same character as the Queen of the Silver Realm, with the "other dimension" she hails from being the Fables Universe. How she managed to come back to life after her death in Fables is never explained.

The Queen of Fables is an extremely powerful sorceress and was able to transform Manhattan into an enchanted forest. She can perform virtually any feat and usually has fairy tale creatures such as Dragons, Ogres and Goblins at her command. Once in our world, she managed to unleash various fictional monsters from other stories to use against the Justice League. She is also immortal and cannot be killed while she resides within her story book. Fighting her was essentially like fighting a dark and twisted fairy tale from the inside.

According to producer Gail Simone, had she scripted another episode for Justice League Unlimited, the Queen of Fables would have been the main antagonist.

The Queen of Fables appears in Batman: The Brave and the Bold. She ends up abducting children and runs afoul of Batman and Captain Marvel.

Queen of Fables appears in DC Universe's adult animation series Harley Quinn as one of the two secondary antagonists alongside Scarecrow. Here, rather than a cosmic entity, she is a human sorceress who uses a magic book to summon fairytale characters and creatures to do her bidding. 30 years prior, she lead an assault on Gotham City with her fairytale army and nearly destroyed it in an attempt to prove that female supervillains could be just as dangerous as the males. The Justice League defeated her army and sealed her inside an American tax book. She is freed in an episode after a judge rules that such a punishment is unjustified and falls into cruel and unjust punishment. However, after she is freed, the judge reveals that he was only freeing her from the book, and sentences her to spend the rest of her life in Arkham Asylum. She is freed by Harley Quinn and joins her crew, but is later kicked out after she has the Big Bad Wolf massacre dozens of people, including several children, at a family reunion.

She is voiced by Wanda Sykes. 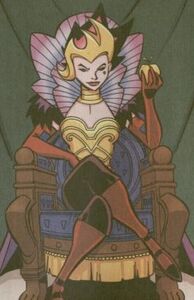 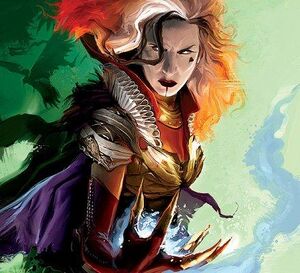 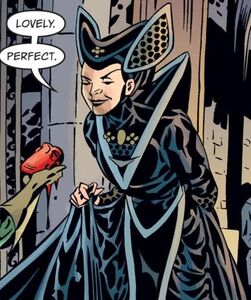 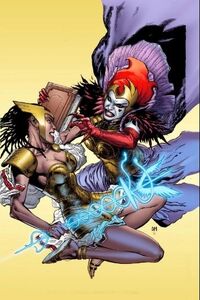 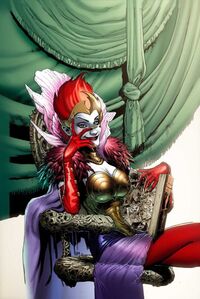 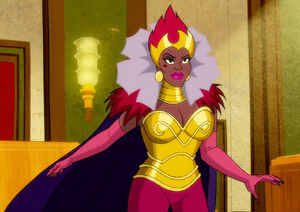 Retrieved from "https://villains.fandom.com/wiki/Queen_of_Fables?oldid=4014218"
Community content is available under CC-BY-SA unless otherwise noted.