For her live-action counterpart from 2010, see: Red Queen (Disney).

Her Imperial Highness
Her Grace
Her Excellency
Her Royal Majesty
Your Majesty
Fat, Pompous, Bad-Tempered Old Tyrant (by Alice)

Skills in the game of croquet

Keep Wonderland under her control (succeeded).

The Queen of Hearts is the main antagonist of Disney's 13th full-length animated feature film Alice in Wonderland, which is based on the 1875 novel Alice's Adventures in Wonderland by the late Lewis Carroll. She is the tyrannical and deranged ruler of Wonderland, and Alice's arch-nemesis.

She was voiced by the late Verna Felton in the original film in her first and only villainous Disney role, and later by Tress MacNeille, who has also voiced other villains such as Carol Miller (also known as Mom) in Futurama, the Perfectionist in the Courage the Cowardly Dog series, and Agnes Skinner in The Simpsons.

The Queen of Hearts is an obese woman with fair skin and black hair. She wears a gold crown and earrings, a red headband, and a black and red gown with black and yellow stripes at the bottom.

The Queen of Hearts is very psychopathic, destructive, irrational and opprobrious, and has an incredibly short temper. All of the residents of Wonderland are extremely mad and insane in some way, but the Queen of Hearts is the most dangerous of them all, by being the ruler of the land. She completely dominates her weak husband, the King of Hearts. She is also shown to be very deceiving, egotistical and manipulative, as she likes to hear the words "Yes, Your Majesty" and insists that "All ways are my (her) ways!".

The Queen of Hearts is also shown to be rather immature, sociopathic, argumentative and hot-tempered, even in the face of Alice, as she is an incredibly impatient, domineering, oppressive and sensitive individual, prone to temper tantrums and (as stated above) rather evil.

Like any insane person, she has huge mood swings, from content to enraged at a moment's notice. Her immediate solution to every problem is beheading, whether her roses have been planted white, she misses a shot in croquet or feels insulted in any way.

Though she clearly overpowers her husband, the King of Hearts, he appears to be the only resident in Wonderland to have any affect on her actions and opinions, to the point where he can cease (or at least, delay) a beheading, as seen a few times throughout the film. With these facts, it can be concluded that the King is the only resident the Queen has any knowledgeable care for, interestingly.

In the film, the Queen appeared (as Alice puts it) to be a "fat, pompous, bad-tempered old tyrant". Her presence is all of the more striking because of how tiny her husband is made to look in comparison to her.

Similar to the book, Alice meets three cards painting the roses red, since they planted white roses by mistake. When the Queen arrives, she orders those three cards beheaded, then challenges Alice to a game of croquet. The game is eventually spoiled by the Cheshire Cat. The Queen blames Alice for it, but before she can give the order, the King suggests holding a trial for Alice. The Queen grudgingly agrees.

The Queen calls the March Hare, the Mad Hatter, and the Dormouse to witness, who hold an unbirthday party for her. During the party, the Cheshire Cat reappears and upsets the Dormouse. The Cheshire Cat runs everywhere, and in an attempt to crush the mouse, the King of Hearts manages to hit the Queen with the gavel.

Of course, the Queen blames Alice for it, and is going to have her beheaded. But Alice eats mushrooms she had procured earlier, which make her grow much bigger. Although Rule #42 says that anyone more than a mile high must leave the court immediately, Alice feels free to call the Queen a "fat, pompous, bad-tempered old tyrant". Unfortunately, she subsequently shrinks down to her normal size, but flees and is able to escape out of her subconscious.

The furious Queen, King, Card Soldiers and the other residents of Wonderland then chase after Alice,out of her subconscious but she gets away and They are later erased from existence for good and supposedly revealed to be a dream

House of Mouse/Mickey's House of Villains

The Queen appeared as a recurring guest in House of Mouse and one of the villains who aid Jafar in taking over in Mickey's House of Villains.

In Kingdom Hearts, Alice is put on trial for stealing the Queen's heart. Sora, Goofy, and Donald arrive, and they offer to find out the real thief. They gather a bunch of evidence, but the Queen disregards the evidence and has her army of playing cards attack them. After they defeat the cards, Alice is taken away by Riku because she is a Princess of Heart.

In Kingdom Hearts: Chain of Memories, the Queen accuses Alice of stealing her memory. Sora, Goofy, and Donald arrive, and Sora insist that Alice did not do it. When the Queen demands to know who did it, Sora says he did it in order to take the blame away from Alice. Thus, the playing cards attacks him but he defeats them. Later, a Heartless arrives, and the heroes defeat it. Alice takes advantage of the Queen's amnesia to say the reason why Sora, Goofy, and Donald are there is because she called them to defeat the Heartless, who stole her memory. Not wanting to ruin her dignity, the Queen agrees with this and leaves.

The Queen appears in this game during the third episode, and it seems that her memories were stolen again. Though this time, it was because of the Bug Blox corrupting Wonderland. When Sora tries to explain the problem, however, the Queen of Hearts thinks that Sora used an army of special insects to steal her memories along with Alice's. Luckily, Sora manages to find the source of the dishonest corruption known as the Trickmaster and destroy it, allowing the Queen to regain her memories. However, as she is about to sentence Sora unfairly again, Alice helps him trick the Queen into believing they had been sent on a mission by her to recover her memories. Too stubborn to admit she was wrong, the Queen fell for the lie and allowed them to leave with their heads.

The Queen of Hearts commonly appears in Disney Parks around the world, mostly in the Disney Villains brand of merchandise.

A "meet-and-greet" character at Disneyland Resort and Tokyo Disneyland Resort, she also is a audio-animatronic in the Alice in Wonderland "dark ride" and sometimes joins in the Mad Hatter's musical chairs game (both in the former).

In Walt Disney World, she makes appearances in the events and shows Disney Villains Mix and Mingle, Unleash the Villains, Club Villain, Mickey's Not-So-Scary Halloween Party, and has her own spell card in Walt Disney World's Sorcerers of the Magic Kingdom.

She also serves as the main basis of Tokyo Disney's Queen of Hearts Banquet Hall in March 8, 1986, and appears in the Dreaming Up! parade there in April 15, 2018. 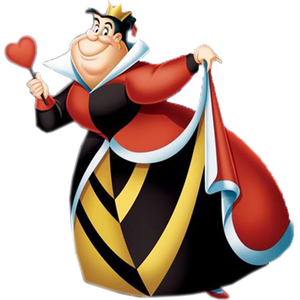 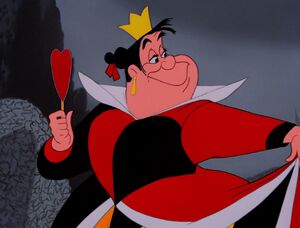 The Queen of Hearts, as she appears in Alice in Wonderland. 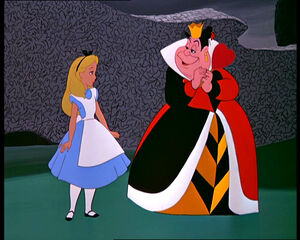 Alice with the Queen of Hearts. 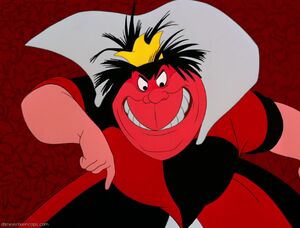 "Off with their heads!" 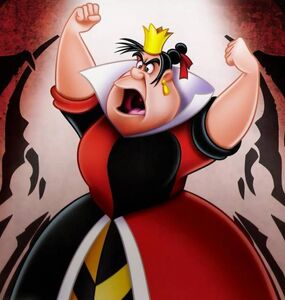 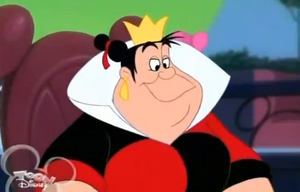 The Queen of Hearts in House of Mouse.]] 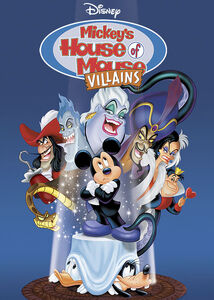 The Queen of Hearts on the cover for Mickey's House of Villains. 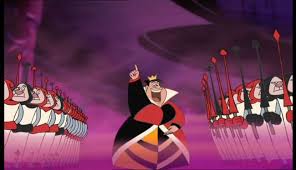 Queen of Hearts in Mickey's House of Villains. 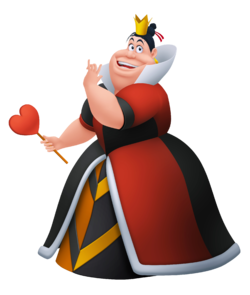 Queen of Hearts in Kingdom Hearts. 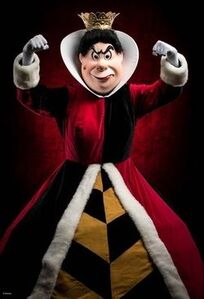 Queen of Hearts in the Disney Parks. 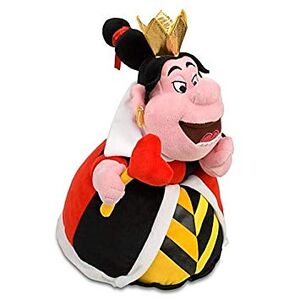 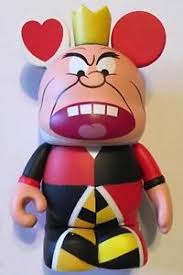 Queen of Hearts in Disney Vinylmation. 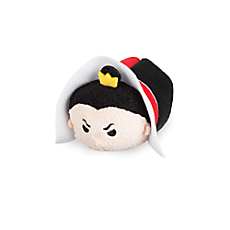 The Queen of Hearts' Emoji.
Add a photo to this gallery 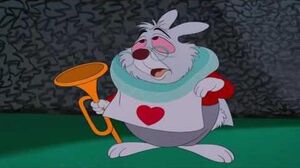 Alice In Wonderland Alice meets The Queen of Hearts HD 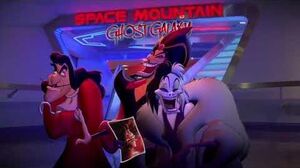 Retrieved from "https://villains.fandom.com/wiki/Queen_of_Hearts_(Disney)?oldid=3291064"
Community content is available under CC-BY-SA unless otherwise noted.