The Queen of Spades is a villain from the DC series.

Washed up actress Mona Taylor was recruited by Wild Card into the Royal Flush Gang. She often clashed with the more competent Ten of Spades.

In the DC Animated Universe there have been three different character who had assumed the mantle of Queen in each of the three Royal Flush Gangs.

The first queen was a teenage metahuman girl with the power of magnetism, who was abducted by the US government and trained into becoming a human weapon for the United States. She, along with four other adolescents (Ten, who felt no pain and had invulnerability, Jack, who could stretch his body to long lengths, King, a pyrokinetic, and Ace, a silent girl with the power to induce madness just by looking at people) was rescued by the Joker and became part of his Royal Flush Gang. The gang had held all off Las Vegas hostage with several timer bombs planted across the Vegas strip. But the Justice League intervened and stopped them from destroying the city. Queen had personally fought against Green Lantern and Hawkgirl, but the two heroes proved more then a match against her. Queen's fate is never revealed, although she could have died in the casino where she had fought the League after Joker had remotely detonated the bomb that had been planted in their.

Queen was one of four individuals selected by Ace of the earlier Royal Flush Gang who was given powers by her to become her playmates as the hour of her death drew nearer, with Queen transformed into a female with super-human strength. However, Queen used his powers to confront the Justice League until he was beaten by them. After Ace's death, Queen reverted back to being male.

The Walker Family were a gang of thieves who stole from the wealthy based around card related themes, such as robbing a Yacht Club, antique swords (swords were the earlier version of the spades found in playing cards), poker games held by gangsters, etc. Whenever members of the gang would retire or would be arrested, the family brought in new members, such as sons, daughters, husbands and wives. The Walker's fancied themselves as being aristocrats of crime. Donna was the former Ten while her father acted as the King, and her lover acted as Jack. This earlier version of the gang was broken apart by Batman (Bruce Wayne) prior to his retirement. But the Walker's would eventually resurface later in life, with Donna acting as the new Queen, her lover as the new King, their daughter Melanie as Ten and their son Jack as Jack. The new Ace was an android.

The Walker Family came into conflict with the new Batman, Terry McGinnis. They had robbed a yacht club of their valuables and later a stole an ancient sword from a museum, but Batman intervened and stopped them. Unbeknownst to the gang, Melanie/Ten fell in love with Terry McGinnis, which causes Melanie to consider leaving the gang as protest against her family having to constantly uproot themselves from city to city. But Queen had coaxed her daughter into staying with the family, explaining that Terry wasn't brought in by Melanie because Melanie knew that Terry wouldn't have fit in (which turned out to be true on account of him being Batman). She convinces Melanie to stay and promises her that someday she will find a man who will become the next King while she assumes the future position of Queen. The gang was later arrested by Batman after Terry discovers that Melanie was Ten and subsequently tracked them down at the hotel they had been living at.

The Walker's had eventually broken out of jail and plotted to readjust Melanie in her role as Ten. To that end Queen and King faked the Royal Flush Gang's kidnapping at the hands of the Jokerz and had Melanie steal from gangsters a mock ransom. Melanie was distraught and heartbroken that her own family would have manipulated her emotionally, but Queen justified their actions as an act of parental love and to ensure that Melanie loved them back. The Walker's would yet again be foiled by Batman, who had called the gangsters who had been robbed to ambush them at their hideout, but also tipped-off the police who had arrested them yet again, accept for Ten who had left them to their fate.

After a disastrous attempt at stealing the Jaguar of Verdeza (a pre-Columbian statuette) for Paxton Powers, the Royal Flush Gang was left in shambles: Jack was arrested, Ace was badly damaged beyond repair and Paxton refused to pay full price for the artifact do to the statuette being partly damaged during the fight with Batman. Queen was left outraged and blamed her husband for all their misfortune, constantly comparing him to her father, whom she considered to be his superior. Do to Queen's constant haranguing, King decided to leave the gang by having her arrested. He had been having an affair with Paxton Power's assistant and bodyguard, Sable Thorp. King kidnapped Paxton and ransomed him off for the Crown of Tikal, a piece from Paxton's illegal art collection. Paxton was unaware that he was being used, so in desperation he bargained with the Walker's to have them kill Bruce Wayne, since Wayne would have no doubt had Paxton arrested for all his crimes. Queen is abhorred at the thought of assassinating, but King accepts. A last fight between Batman and the Royal Flush Gang ensues, during which Ace is destroyed and King runs off with the crown. Queen manages to escape and tracks King down back at their hideout. After seeing that her husband had been cheating on her and even planned to run away with his mistress alongside all of Paxton's art collection Queen viciously attacks him, blaming him for ruining their family and more importantly for wasting her life on him. After Batman arrives to break up the fight Queen is blasted into a wall by King, but King is soon after beaten by Batman and the last of the Royal Flush Gang are sent to Jail.

The Joker's version of queen used any metal object she could magnetise as a weapon, ranging from chairs and even dimes which she fashioned into a full body armour. The Walker Family Queen used a staff that fired energy blasts. The third queen also utilized a staff as a weapon, albeit similar to a mace as per the weapon's royal origins.

Acting: As a Broadway actress, Mona Taylor had training as an actress.

Addictive Personality: All of Mona's skills were nullified as soon as she started drinking and gambling.

Sceptre Royale: a scepter that could change her appearance into that of any other female. She managed to successfully impersonate Lois Lane and Sue Dibny. 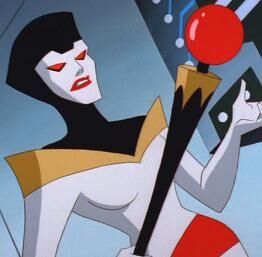 Queen of Spades in Batman Beyond 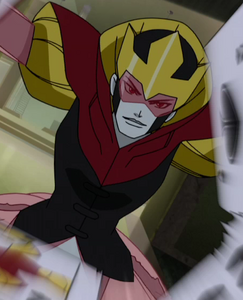 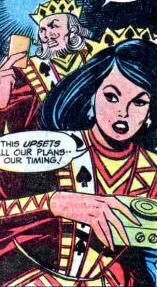 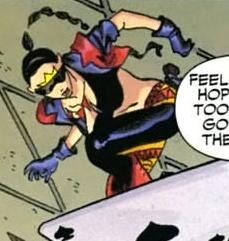 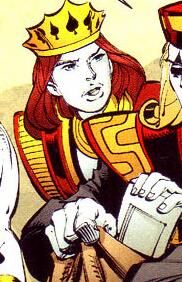 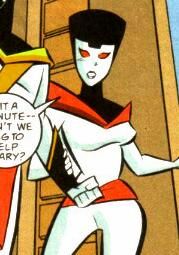 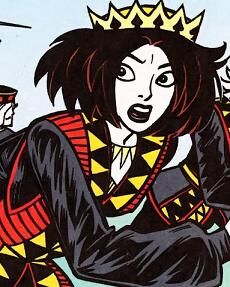 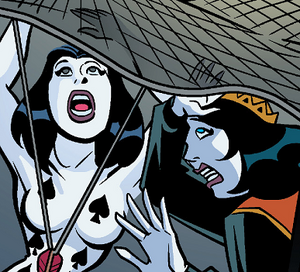 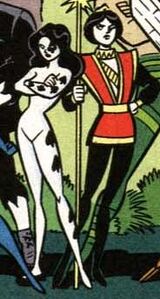