Nazi (called by other characters)

Bossing around the other survivors.

Survive the cube/Kill the other survivors

Quentin is a gruff and aggressive man who takes charge and undertakes most of the dangerous tasks. He is said to be in his 40s. At first Quentin is portrayed as calm and collective, urging the other survivors to use their heads and work together. Shortly after Rennes perishes, Quentin begins to lose hope, and sanity. Eventually, Holloway begins to argue with Quentin and gets on his nerves. After this, he decides to drop her outside the cube, killing her. This marks his spiral into madness. From here on, Quentin is more aggressive, violent and irrational, and ends up killing the rest of the survivors, except for Kazan, who manages to escape the cube. Quentin tried to escape too and kill Kazan, but was held back by a dying Worth (Quentin's final victim) and ended up getting crushed to death between the wall space of the cube. To the end of his life, Quentin died a violent, bloodthirsty monster.

Quentin, Worth, Holloway, Rennes, and Leaven - meet. None of them knows where they are or how they got there. Quentin informs the others that some cubes contain traps, which he learned by nearly being killed by one. Rennes assumes each trap is triggered by a motion detector, and tests each room by throwing one of his boots in first. Leaven notices numbers inscribed in the passageways between rooms. Quentin, a policeman, recognizes Rennes as "the Wren", an escape artist renowned for getting out of jails. After declaring one room trap-free, Rennes enters and is sprayed with acid, killing him. The others realize that there are different kinds of detectors, and Quentin deduces that this trap was triggered by heat.

Quentin believes each person has a reason for being there. He is a police officer, Leaven is a mathematics student, Holloway a doctor and conspiracy theorist who thinks the "military industrial complex" is responsible for their predicament, and the surly Worth declines to talk about himself or his past. Leaven hypothesizes that any room marked with a prime number is a trap. They find a mentally challenged man named Kazan, whom Holloway insists they bring along. Quentin enters a room determined safe by Leaven's calculations, but is nearly killed by a razor-wire trap. Tensions rise due to personality conflicts and the group's lack of confidence in Leaven's system. Quentin provokes Worth into an argument about finding the exit, and Worth insists there is no escape. Worth admits that he designed the Cube's outer shell for a shadowy bureaucracy. He denies knowing anything else about it but guesses that its original purpose has been forgotten, and that they have been imprisoned within simply to put it to use (so that the organisation could avoid admitting that the Cube was a waste of time and money). His knowledge of the outer shell's size allows Leaven to determine that each side of the Cube is 26 rooms across, for 17,576 rooms in all. She guesses that the numbers indicate the Cartesian coordinates of the rooms. The group starts moving toward the nearest edge as determined by her theory.

Believing themselves near the outer wall of the Cube, they find that each neighboring room is trapped. Rather than backtrack, they decide to make their way silently through a blue colored room whose trap is activated by sound. The passage is without incident until Kazan makes a noise during Quentin's transit of the room and Quentin is almost impaled by spikes. Upon reaching safety, he threatens Kazan with violence, terrifying Kazan. Holloway defends Kazan and gets in a provocative argument with Quentin about his marriage. Quentin slaps her in response, further increasing the group's tension.

Worth opens a door under Quentin's orders. On the other side, they find a wide, unlit gap between the Cube and the outer shell. Tying together their clothing to make a rope, Holloway swings out to investigate but nearly falls when the Cube quakes violently. Quentin takes the opportunity to drop her to her death, and he tells the others that she slipped. After coming to terms with the tragedy, they take a nap to recover from exhaustion.

Quentin wakes up early and carries Leaven to another room without alerting the others. He tries to persuade her to abandon the others with him. He then makes a sexual advance but she rejects him, and Quentin becomes aggressive. When Worth finds them and intervenes, Quentin beats him savagely and drops him through the floor hatch. Worth laughs hysterically at what he finds — Rennes's corpse. The group is demoralized by the thought of having been wandering in circles. Worth has an epiphany, realizing that the rooms themselves are moving periodically relative to each other, and this movement is responsible for the rumbling sounds and violent quaking.

Leaven deduces that traps are not tagged by prime numbers, but by powers of prime numbers. Leaven realizes that Kazan is an autistic savant who can quickly do prime factorization mentally, much to Quentin's surprise. Leaven determines that the numbers indicate the positions within the cube where each room rests between moves through the Cube. The room that connects to the "bridge" leading to the only door in the outer shell proves to be the one in which the group first woke up. The alignment they need to escape will come in two moves.

Worth preemptively ambushes Quentin and leaves him behind during room movement, but Quentin suddenly reappears and fatally stabs Leaven and then Worth.  Quentin moves to kill Kazan, but with the last of his strength Worth grabs Quentin's leg, pinning him in the passageway between rooms as the rooms shift again. Quentin is torn apart. 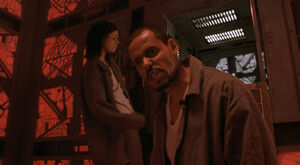 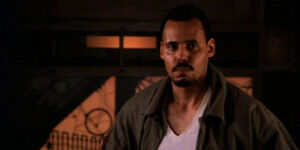 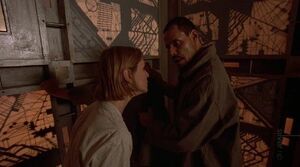 Quentin being called a Nazi. 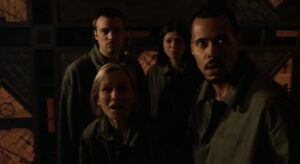 Quentin with the group. 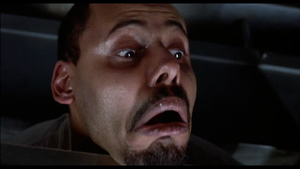 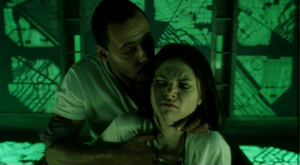 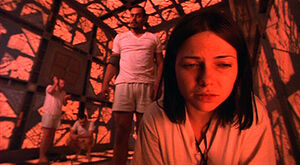 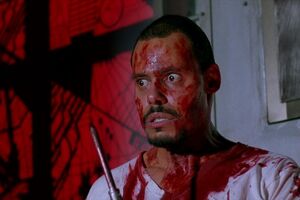 Quentin after he kills Leaven 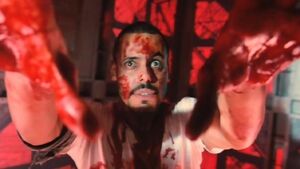 Quentin about to meet his demise by getting torn apart by the cube.
Add a photo to this gallery
Retrieved from "https://villains.fandom.com/wiki/Quentin_McNeil?oldid=3178732"
Community content is available under CC-BY-SA unless otherwise noted.