Get revenge on Jonah Hex for killing his son.

Manipulate the Union's folk to turn against their own society (both failed).

Quentin Turnbull is the main antagonist of the 2010 western film Jonah Hex. He is an nefarious terrorist and the boss of Burke.

He was portrayed by John Malkovich, who also portrayed Dave/Dr. Octavius Brine in The Penguins of Madagascar, Mitch Leary in In the Line of Fire, Cyrus Grissom in Con Air, Humma Kavula in Hitch-hiker's Guide to the Galaxy, Tom Ripley in Ripley's Game, Pascal Sauvage in Johnny English, Dave in The Penguins of Madagascar, Teddy Deserve in Knockaround Guys and Vicomte Sébastien de Valmont in Dangerous Liaisons.

According to that film's storyline, Turnbull is a former general officer in the Confederate Army, who (after the Battle of Gettysburg) intentionally targets civilians - hospitals, churches, schools - in an attempt to turn the Union's people against their government (in effect, becoming a proto-terrorist) as well as enslave Mexicans who gave him the nickname of "Terrorista". During the final years of the War, he orders Jonah Hex to burn down a hospital, but Hex refuses, and is forced to kill Turnbull's son, Jeb. Hex later turns Turnbull and his men in to the Union military.

Swearing vengeance, Turnbull ties up Hex outside his house and forces him to watch as his house is burned down with Hex's wife and son inside. He then brands Hex's face with the initials "QT" and leaves him to die. Hex later removes the initials by searing his face with a heated tomahawk. Turnbull fakes his death and lies low for several years, resurfacing to mastermind a terrorist attack on the United States during its centennial celebrations. He steals a "superweapon" designed by Eli Whitney, and plans to use it, mounted on an ironclad, to level Washington, D.C.. He is killed when Hex traps him aboard the ship and detonates the magazine, exploding the ship.

Turnbull is a ruthless and dangerous person who couldn't accept defeat of the South during the Secession war. He has no qualms murdering innocents or disabled people just to spite the defeat. Turnull develops a particular grudge against his former man and friend Jonah Hex because the latter has murdered his own son Jeb. He also has some respect for his men, giving them proper burials. This proves Quentin has redeeming qualities despite his horrible crimes. Turnbull even vows to completely destroy the USA to carry out the loss of his son. 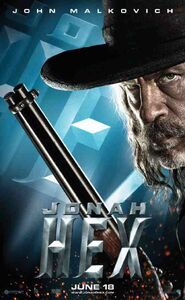