Warrior of the Corvus System (formerly)

Host of Don Armage
Shogun of the Jark Matter

Become known as an "icon" throughout the universe.

Destroy the universe and recreate it from scratch.

Quervo is the host of Don Armage and the secondary antagonist of Uchu Sentai Kyuranger.

He was originally the best friend of Tsurugi Ohtori aka Houou Soldier. However, Quervo was secretly jealous of Tsurugi for being stronger than him, leading Quervo to become the host of Don Armage (named Don Quervo in supplementary materials).

Quervo first encountered Tsurugi when the latter infiltrated a Jark Matter confinement camp in the Karasu System. Together, the two were able to liberate everyone who was imprisoned in the camp. Tsurugi then proposed he and Quervo work together, believing that Quervo's intellect and his strength could free the universe from Jark Matter's grip. Quervo agreed and thee two would became partners and best friends from them on.

Though the two made a great team, Quervo believed himself to not be worthy of fighting alongside Tsurugi due to his own inferior strength, though Tsurugi encouraged him by pointing out that his intelligence had saved them on many occasions. Secretly though, Quervo harbored jealousy and resentment towards Tsurugi for his immense powers and fighting ability.

Becoming the host of Don Armage

Quervo, along with Tsurugi and the other 86 constellation warriors, participated in the battle against Don Armage, in which everyone save for himself and Tsurugi was killed by the Shogun. After Tsurugi's attempt to defeat Armage by sacrificing his immortality failed, Armage launched an attack at Tsurugi. Before it could hit Tsurugi, Quervo blocked it, absorbing the killing blow. Though Quervo told Tsurugi he took it so the Houou Soldier could save the universe, deep down Quervo only sacrificed himself so he would be known throughout the universe as the hero who defeated Don Armage.

After being destroyed by Tsurugi, the spirit of Don Armage approached Quervo and offered him immense power in exchange for becoming his host. Quervo eagerly accepted the offer, allowing Armage to possess him and granting the Shogun a new body with which to dominate the universe. Unlike Armage's other hosts, Quervo managed to retain his full identity and being.

Quervo's true identity as Don Armage's host was revealed to Tsurugi during the Kyurangers' mission on Southern Cross. Shocked at Quervo's betrayal, Tsurugi kept it a secret from the Kyurangers until Quervo and Don Armage revealed themselves to the Sentai. After declaring himself to be Don Armage, Quervo flew away and alluded to the Kyurangers that they would have a confrontation on Earth.

In his final battle with the Kyurangers, Quervo fought against Shishi Red and Houou Soldier while the other Kyurangers focused on destroying the Planetium Bomb. During the fight, Quervo trapped Lucky in an illusion world where the Earth and the entire universe was destroyed by the Planetium Bomb, though Lucky managed to break out and continue fighting Don Quervo as Shishi Red. Quervo also revealed to Tsurugi that he had always resented him for being stronger than he was and never considered him a friend.

With the combined power of all twelve Kyurangers, Don Quervo was defeated and Don Armage was purged from Quervo's body. Tsurugi then approaches Quervo and apologizes to him for not realizing how he felt. Quervo responds by telling Tsurugi to shut up before getting up proclaiming that the universe belongs to him. Quervo then charges at Tsurugi and tries one last time to attack him, resulting in Quervo being quickly cut down and killed by the Houou Soldier. As Quervo's body turned to dust, Tsurugi told him he even after everything he did, he would still call Quervo his friend. 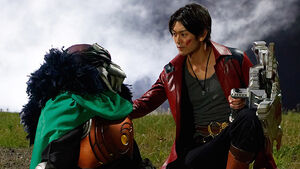 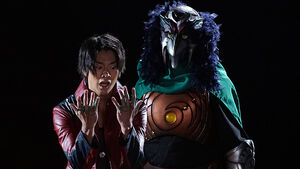 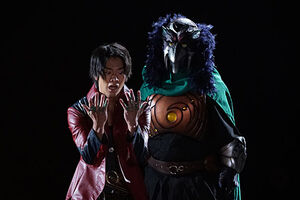 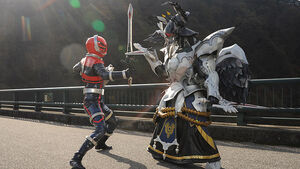 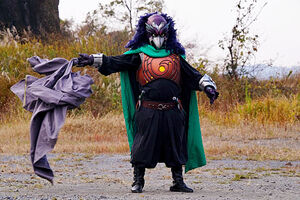 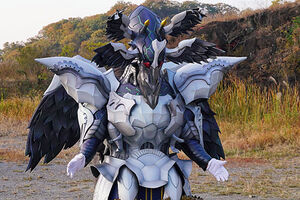 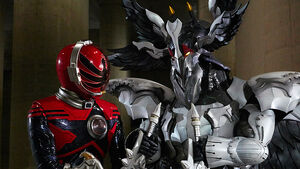 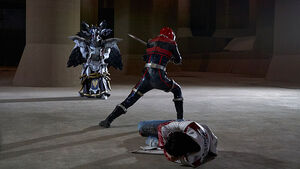 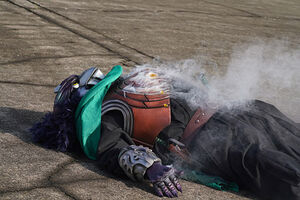 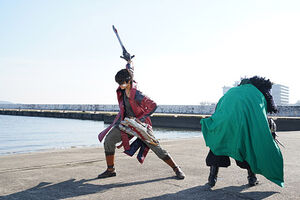 Retrieved from "https://villains.fandom.com/wiki/Quervo?oldid=4184337"
Community content is available under CC-BY-SA unless otherwise noted.