Shooting lasers from his eyes

Shooting down lasers from his eyes.
Possessing others.

Quetzalcoatl is the main antagonist in the first season of Legend Quest and the most powerful foe Leo and friends have fought yet by an immense margin. Once a well-meaning deity who helped humanity, albeit, through violent means, Quetzalcoatl grew angry, vengeful and bitter over his constant revivals and seeks to wipe out humanity and begin anew.

He is voiced by Dan Osorio in the original language, and Al-Kesne Shaw in the English dubbed version.

At certain points in Human History, Quetzalcoatl would completely remake the world. In doing so, he would cause a series of natural disasters across the entire globe, destroying civilization and forcing humanity to quickly adapt and regrow and forcing them to develop new and greater technology than ever before. His intentions were good, but his actions were seen as evil by even his priest, who locked him away.

Sometime in the past, Quetzalcoatl was sealed away in his dimensional prison where his influence on the mortal realm was greatly diminished. Although his destructive actions in the past have gained many enemies, the population of Puebla seemed to think highly of Quetzalcoatl, as Leo was apparently taught that he was a good guy, The Prophecy although Friar Godofredo had to assure him that his good nature was only present when he was in a "good mood".

Even sealed away, Quetzalcoatl found ways to affect the world in subtle, yet long-lasting ways. He forged a fake prophecy regarding "The Lion" defeating "The Serpent" and tricked the world into thinking the Esfera was his one true weakness when in actuality it was his ticket to eternal freedom. This fake prophecy was so widespread that even the smartest men in the world and even Fenrir believed it to be true.

At some point in the 1810s, Quetzalcoatl's minions completely destroyed the town of Puebla and locked it away in his Dimension. Many of the citizens were enslaved while only a lucky few managed to stay safe.

The Serpent and the Egg

In the second reincarnation, it looks like a giant humanoid with reptilian facets, muscle in the arms and pecs, serpentine tail, blue hair darkened, grayish skin, pink lips, and two fangs positioned at the bottom of the mouth, green eyes covered by two spots that shade their sockets. Commonly wears a multicolored kopilli ketzalli crown, some bluish bracelets that match solid gold, a monumental necklace, and a belt with an snake eye, share the same tonalities.

Essentially the reason why a usually benevolent god would want to destroy all of humanity and remake the world as he sees fit. It's further explained that this Quetzalcoatl is tired of the never-ending cycle of death and rebirth just for the benefit of people who don't even worship him anymore.

He made plans for someone destroying the Esfera thousands of years in advance by spreading the legend that whoever stabbed it gained power, unaware that destroying it ensured he got to stay alive. He lets his plan slip when he shows too much anger at the Celestial Point being missing, instead of being happy that the only weapon capable of destroying the Esfera is gone.

The New Quetzalcoatl would have devastated mankind as the snake god usually does when he's reborn, but the scheming of his previous incarnation to kill him before he could even be born and wipe out the human race for good delayed that.

At least Planet level (Has the power to completely remake the world in his image, and has done so an untold number of times throughout his many lives. Said to be the rival of Fenrir the Wolf, who claimed he devoured entire worlds), likely Universe level (Has complete control over his realm, which was described as an alternate dimension by himself, and as dimensional prison by The Brotherhood. Overpowered Prince Akihito and annihilated Nu Gui, the latter was done with no effort. Fenrir the Wolf was also said to be able to consume his entire dimension)

Quetzalcoatl had also been plotting his plan for over 10,000 years and tricked Baba Yaga and Nu Gui, two extremely intelligent and cunning witches, to do his bidding and tricked the entire world into thinking the Esfera to be his one weakness. Even from birth, Quetzalcoatl was shown to have a mastery over his powers and should logically be even more skilled by the time of his resurrection. 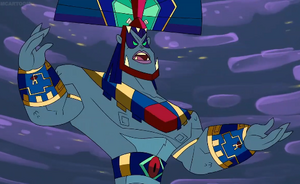 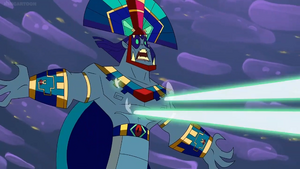 The "old Quetzalcoatl" demise after the esfera was destroyed. 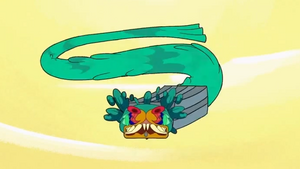 The "new Quetzacoatl" was born.
Add a photo to this gallery

Retrieved from "https://villains.fandom.com/wiki/Quetzalcoatl_(Las_Leyendas)?oldid=3824836"
Community content is available under CC-BY-SA unless otherwise noted.