Ty the Tasmanian Tiger 3: Night of the Quinkan

The Quinkan are a malevolent race of shadowy beings and the enemies of the Bunyips, led by their demonic and traitorous leader, the Quinking. They are the main antagonists of the video game, Ty the Tasmanian Tiger 3: Night of the Quinkan.

Their origin is unknown for the most part. What is known is that they have long been engaged in a war with the Bunyips and now that war has extended to Ty's world. They are shown to be capable of mass destruction in their numbers and elemental capabilities.

The Quinkan initially appear in the Dreaming, the reality/dimension of the Bunyips that oversee Ty's home of Southern Rivers. Ty and Shazza go into the Dreaming to take out and forcibly remove the Quinkan from the Bunyips' home. However, one stray one attacks them on the portal back home, separating Ty from Shazza. This causes Ty to arrive six months after the Quinkan have overtaken and devastated Southern Rivers.

As the game progressed, Ty and his allies fought and killed Quinkan that ravaged the area, although Ty was set back when Shazza was abducted. Being forced to work with Boss Cass to get information for her whereabouts, Ty eventually crossed paths with and defeated the Dragonquin, freeing her.

Shazza possessed information about the Quinkan's intent of readying their world for the arrival of their leader the Quinking, and that the horrific beast could only be stopped by the legendary Shadowrang. However, this required Ty to find the Shadow Stones necessary to power it, and he was helped in that regard by Cass's thorny devil lizard minion Fluffy, who started to redeem herself as an ally. Finding the materials, they create the Shadowrang and Ty goes off to confront the Quinking.

Possessing Boss Cass to speak to Ty, the Quinking reveals that the Quinkan were summoned to Ty's world by the cassowary who believed he could manipulate them to serve in his world-domination goals. The Quinking, intending to kill Ty, assumes the form of "the most powerful creature on the planet" (which fittingly resembles Ty). After being wounded, the Quinking assumed its true dragonlike form and continued the fight.

Boss Cass (free from the Quinking's possession and capturing Ty's allies including the redeemed Fluffy) draws out a gigantic laser with the intent of killing both the weakened Ty and Quinking. Fluffy, however, throws Ty out of the laser's path, killing herself in the process but also killing the Quinking. Following their leader's destruction, the Quinkan themselves died out. 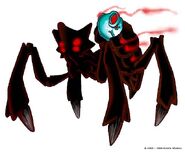 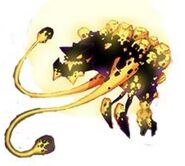 Retrieved from "https://villains.fandom.com/wiki/Quinkan?oldid=3555925"
Community content is available under CC-BY-SA unless otherwise noted.