Quinn is the secondary antagonist of the 1998 live action film, Blade. He is a vampire hoodlum and Deacon Frost’s Second-in-Command.

He was portrayed by Donal Logue.

Quinn is a loud, nasty, and energetic gangster who enjoys spreading chaos and mayhem. He confronts Blade several times throughout the film, each time having one of his hands severed, only to be replaced with a new one later (by unknown means, either genetically regrown or stolen from cadavers).

Blade eventually gets tired of their reunions and severs his head with a garrotte at the start of the final battle. 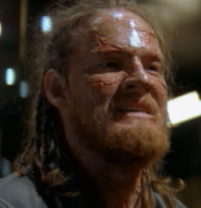 Retrieved from "https://villains.fandom.com/wiki/Quinn_(Blade)?oldid=3294487"
Community content is available under CC-BY-SA unless otherwise noted.