The Prime of Life

Revive and preserve Cybertron by encasing Unicron (Earth) inside it

Evil Creator
Quintessa is a major villain in the Transformers film series. She is a Cybertronian sorceress and one of the Creators of the Cybertronian race, revealing to be the creator of Optimus Prime as she planned to use him to restore Cybertron by destroying Earth. She appears as one of the two main antagonists of the 2017 film Transformers: The Last Knight (the other being Megatron), and is set to return in the unnamed sequel in an unknown rol.

She was voiced by Gemma Chan, who also portrays her human form.

During the events of the film, all Transformers (both Autobots and Decepticons) are being hunted down by the world authorities due to recent events following Lockdown and Harold Attinger's deaths. Upon hearing of Lockdown's death, Quintessa decides to take matters into her own hands by bringing the dead planet Cybertron to Earth.

Upon Cybertron's arrival on Earth's orbit, a comatose Optimus Prime (leader of the Autobots) crash-lands into Cybertron, awakening from his stasis. Awaiting Optimus' arrival, Quintessa has Optimus chained and berates him for his war against the Decepticons that ravaged much of Cybertron. Optimus angrily states that Megatron (the former apprentice of The Fallen and current leader of the Decepticons) is the one responsible for causing the war in the first place, but Quintessa refuses to accept this and instead uses her magic to brainwash Optimus into doing her bidding. With that in mind, Quintessa dubs Optimus as "Nemesis Prime" and orders him to destroy Earth, saying that it's the dormant body of the notorious planet eater Unicron.

As the plot goes, Cade Yeager and a young girl named Izabella (who was orphaned during Sentinel Prime's attack on Chicago) learned of an ancient Cybertronian technology that existed on Earth ever since medieval times, and that it was located in the bottom of the ocean. They also learned that an ancient staff (built by the Cybertronian Knights during King Arthur's reign) can be used to activate the technology, and that Quintessa plans to use it to revive Cybertron by colliding it into Earth.

After the Autobots locate the staff before engaging into a fight with ancient Cybertronian Knights, Optimus (having followed them in secret) managed to steal the staff and fly off just as the machine arises from the ocean. During the battle of the machine, Optimus attempts to kill Bumblebee, who eventually managed to snap Optimus out of his trance. Unfortunately, Megatron managed to steal the staff from Optimus and formed a deal with Quintessa to revive Cybertron so that the Decepticons and Creators can rule it.

However, the Autobots team up with the Cybertronian Knights to fight against the Decepticons and Infernocons (Quintessa's soldiers), right before they used Lockdown's ship to stop the collision on Earth. Following the deaths of many Decepticons and Infernocons, Optimus was able to finish off Megatron by sending him off flying back to Earth in the process. Having enough of this, Quintessa angrily engages into a fight against Optimus and attempts to kill him for his betrayal, but she is seemingly destroyed by Bumblebee while Viviane deactivates the machine by removing the staff from it, saving both Cybertron and Earth from colliding with each other.

In the end, the Autobots return to rebuild Cybertron as it is now in orbit with Earth, but they are unaware that Quintessa has survive her encounter with Bumblebee and has taken refuge in Earth. Disguised as a human, Quintessa meets with a group of scientists who have discovered a giant ancient spike (a part of Unicron). She tells the scientists not to touch the spike, saying that she can tell them how to destroy the planet eater. It is unknown what happened to her afterwards. 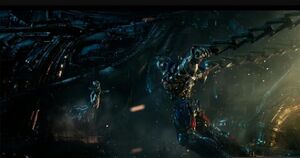 Quintessa coming before Optimus Prime after chaining him.
Add a photo to this gallery

Retrieved from "https://villains.fandom.com/wiki/Quintessa?oldid=2109106"
Community content is available under CC-BY-SA unless otherwise noted.