Harry Potter and the Philosopher's Stone

Travelling around the world, mostly in dangerous remote places.

Bring Lord Voldemort back to full power and physical form by finding the Philosopher's Stone.

Kill Harry Potter by any means necessary (both failed).
Become a very powerful wizard, so that he can become famous (before meeting Voldemort).

Professor Quirinus Quirrell is the main antagonist in the 1997 book Harry Potter and the Philosopher's Stone by J.K. Rowling, and its 2001 film adaptation of the same name and a posthumous antagonist in later installments.

He was a Half-Blood Wizard and the Muggle Studies professor at Hogwarts. He became the Defense Against the Dark Arts teacher during Harry Potter's first year at Hogwarts in 1991. He was the host of Lord Voldemort's non-corporeal form, scheming to steal the Philosopher's Stone and use it give Voldemort a new physical body while using Severus Snape as a scapegoat to keep any suspicions away from himself.

He was portrayed by Ian Hart, who also provided Voldemort's voice in the same film, as well as Franklin Hall in Marvel's Agents of S.H.I.E.L.D. and Ryan McGregor in the BBC adaptation of Noughts & Crosses.

Talented Wizard/Half-Blood Wizardkind Physiology: As a wizardkind (a sub-species of human race distinguished by their ability to use magic and greater lifespan) of Half-Blood lineage and one of DADA teachers, Quirrell was known to have a brilliant mind and had an excellent aptitude for theoretical learning, particularly when it came to Defensive Magic (though was less competent in the application of that knowledge). Whilst this made him a highly intelligent student, it did not make him a great Wizard, his practical aspect severely hampered by his timid nature. However, given Rubeus Hagrid had a high opinion of him and his position as the Professor of Defense Against the Dark Arts, it can be deduced that while he may not be a great Wizard, he eventually still gained just sufficient ability and power as a Wizard to be appointed as a teacher to many young Wizards and Witches by the time he became an adult, although most of his great success as a teacher was due to his exemplary knowledge, experience and skill in the theory of magic acquired from his journeys rather than practical skill. It appears that only upon being possessed by Voldemort, with his magical powers dramatically augmented, was able to perform feats that required a considerable amount of magical power.

Quirrell was a young man with very pale skin. When Quirrell returned from his sabbatical in Albania, one of his eyes developed a twitch and his skin became quite pale. At the start of the term, he wore a purple turban. Near the end of his life, it was revealed under his turban that he had allowed Voldemort's fledging body to grow a face at the back of his own head and joined forces with him. 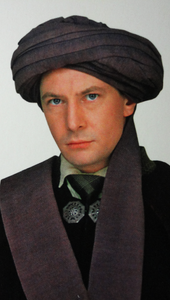 Quirrell in 1991, wearing a turban to hide Voldemort's presence. 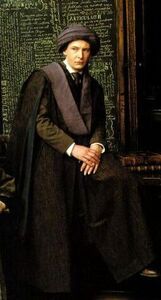 Quirinus Quirell as a Professor of Hogwarts.

Quirrell at the feast at Hogwarts, sitting next to his rival Snape.

Quirrell during one of his lessons.

Quirrell with the other teachers, arriving at the scene where Harry and Ron fought the Troll. 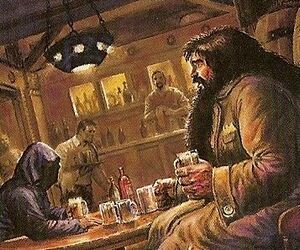 A disguised Quirrell with Hagrid at Hog's Head Inn.

Quirrell drinking unicorn blood for Voldemort, in the Forbidden Forest.

Quirrell revealing his true colours, as his innocence and nervousness were all an act and he was responsible for all the bad things that happened in Hogwarts through out Harry's first year, not Snape.

Quirrell with Harry before the Mirror of Erised. 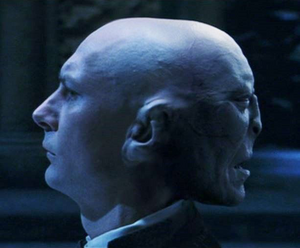 Voldemort revealing himself to Harry.

Quirrell's demise in the film. 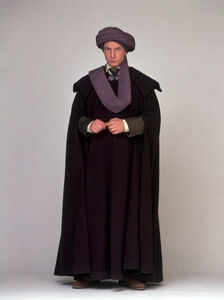 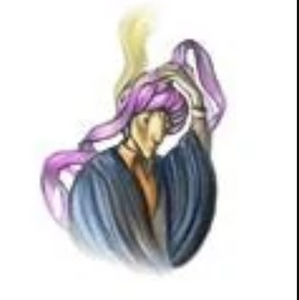