Bossing around her cleaner.

To get her daughter to cement a role in the Paris Opera Ballet so people will honor her family name, and to kill Félicie for ruining her plan (all failed).

Régine Le Haut is the main antagonist of the 2017 film Leap! (originally released in 2016 under the title Ballerina). She is a cruel and haughty restaurant owner who desires to bring glory to her family name by any means necessary.

She was voiced by Julie Khaner in the original French/UK release, and by Kate McKinnon in the American release, who also played Kellyanne Conway in Saturday Night Live, and previously voiced Karen Griffin in Family Guy.

Régine is shown to use her connections as a restaurant owner to get what she desires the most. She is also very haughty to her cleaner Odette, along with a new servant named Félicie, an orphan who ran away from an orphanage to pursue a dream in becoming a ballerina.

During the events of the film, Régine arranged for her daughter Camille to give her the opportunity to perform in an upcoming production of The Nutcracker. But due to Camille's snobbish behavior towards Félicie, the latter takes the letter and assumes the former's identity to enroll in the school for auditions. Despite several improvements over the next several days, Félicie was found out by Régine, who suggests in having her expelled and arrested. However, Régine's request was denied by the school's choreographer Mérante, who allows Félicie to stay, though Félicie became late for the final audition and is unable to perform well, thus Camille wins the audition.

Satisfied that her daughter finally got the role, Régine callously had Félicie sent back to her orphanage, bragging to Odette that she was never going to see her again and that she was fired. However, Félicie returns and engages into a dance battle against Camille, managing to win the hearts of the audience by doing a grand jeté over a flight of stairs. A remorseful Camille then admits defeat by confessing that she only danced because of her mother's influence and that Félicie was more deserving of the part, thus Félicie was set to dance in The Nutcracker.

Unfortunately, this doesn't suit Régine very well as she feels extremely ashamed by this turn of events. Deciding to get even with Félicie by killing her, an angry Régine chases down Félicie to the unfinished Statue of Liberty, ignoring Camille's pleas to leave her alone. Cornering Félicie at the top of the statue, Régine tried to make Félicie's death appear to be a tragic accident. But Victor was able to use a winged contraption he'd made to rescue Félicie, while Régine not giving up, attack Victor and wanted kill them both, but she get tangled up in ropes just as several boards fall down to reveal the new statue, in result Félicie and Victor fly away leaving her tangled up.

Régine's ultimate fate was left unknown after Félicie managed to get to her performance in time. Possibly she was arrested for her crimes. 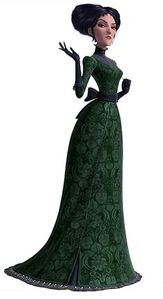 Régine's evil stare as she is disappointed to see that Felicie will be allowed to stay in the auditions.

Régine demanding Camille to beat Felicie in the auditions.

Régine smirking as she watches Felicie being carted off back to the orphanage before firing Odette.

Régine's villainous breakdown after learning that Felicie has won the role for the opera.

"Something tells me that this is the only crown you'll see today: the victim of a terrible accident on the night of your debut. You will have something to share with Odette: both of you used to be dancers!" 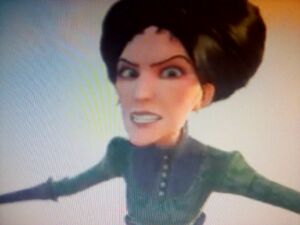 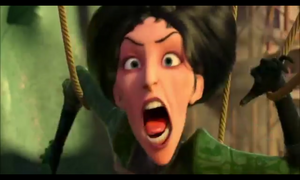 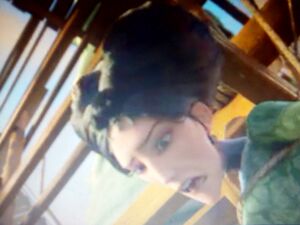