Villains Wiki
Register
Don't have an account?
Sign In
Advertisement
in: 007 Villains, Minion, Doctors and Scientists,
and 26 more

Professor R.J. Dent, or simply known as R.J. Dent or better known simply as Professor Dent, is the secondary antagonist in the 1962 James Bond film Dr. No. He is a geologist who works for Dr. Julius No.

He was portrayed by the late Anthony Dawson, who also played Ernst Stavro Blofeld in From Russia with Love and Thunderball.

In the film, Dent meets Bond when he first arrives at Queens Club, where they are seen playing cards following the death of Commander Strangways.

Dent appears again in his office where Bond gives Dent a medical bill that Strangways received from him. Dent tells Bond that Strangways had sent him samples to be examined, but Dent thought they were worthless so Dent throws them back into the water. When Bond goes to Strangway's boat, he brings his giger counter with him and discovers that the samples are radioactive. However, knowing that Bond is on to him, Dent heads over to Crab Key Island to tell Dr. No about Bond's interference. Dr. No. tells Dent not to fail him again and gives him a spider in a cage.

Later, after Miss Taro, has been taken by a taxi with the police in it, Professor Dent shows up at Miss Taro's apartment (after contacting Miss Taro) and shoots the bed, wasting all of his bullets. However, Professor Dent turns around and sees Bond in a chair with his Walther PPK with a silencer on it aimed at Dent. Dent tells him that Dr. No is behind the whole master plan and while Dent's gun is on the floor, he uses his leg to get it. He pulls the trigger, but realizes too late that he used all of his bullets. Bond then coldly observes, "That's a Smith & Wesson, and you've had your six," and shoots Dent dead. 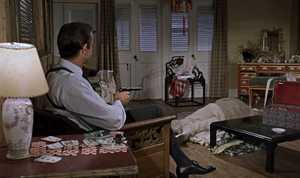