Droid for the Republic

Spy for The Separatists

Be rewarded by General Grievous and serve him.

R3-S6 is the titular main antagonist of the Star Wars: The Clone Wars R3-S6 arc. He was the temporary replacement for R2-D2, Anakin Skywalker's droid, who had been captured by General Grievous. Skywalker's Padawan, Ahsoka Tano, was convinced R3 was far more advanced than the old R2 unit, but Skywalker had doubts about the droid.

Being a spy, R3-S6 is a cunning and diabolical droid who was capable to fake his unintelligence. Being a loyal droid for General Grievous, he would do anything to appease its master.

Following the loss of R2-D2 during the Battle of Bothawui, R3-S6 was assigned to Jedi General Anakin Skywalker as a replacement. R3, secretly an agent of Separatist leader General Grievous, accompanied Skywalker and his Padawan, Ahsoka Tano, as they searched for R2. In an attempt to gain Skywalker's appreciation for R3, Tano nicknamed the droid "Goldie", pointing out that Skywalker was Gold Leader of Gold Squadron. Despite this, Skywalker still disliked R3, giving him the name "Stubby", as he felt something suspicious on the droid. Skywalker, Tano, R3, Captain Rex and some clones went to the Sepratist Ship, The Vultures Claw to rescue R2 and destroy the place. Many times on this mission R3 made small sabotages, Rex and Skywalker didn't trust him at all. His true colours were revealed when Ashoka was dueling Grievous. Tano was hiding and saw Grievous pat the droid's head and say, "R3, what do you have to report?"

The detonators were set and the heroes had to leave the ship. R3 closed the hangar bay's doors so they couldn't escape as well as sent vulture droids to terminate them. Anakin then had the recovered R2 fly to where R3 was and electrocute him as they dispatched the oncoming droids. It appeared R3 had been shut down, and R2 re-opened the hangar bay letting the heroes escape. R3 then awoke and smashed R2 out onto the catwalk outside the ship which was exploding and falling to the planet below. They then started attacking each other with their various slicing tools. R2 then sprayed the floor with oil and smashed R3 onto the edge of the catwalk. R3 used his tow cable to hang onto R2 and avoid the fall. R2 used his rockets to set the oil alight. This made the cable R3 was hanging onto weak, so R2 began cutting it with his cutting tool despite R3-S6's pleas to not cut it. The cable snapped, and R3 fell off of the edge screaming, and then collided with some falling debris that smashed one of his arms and head off. Skywalker returned in a small ship to rescue R2, then flew away as The Vulture Claw exploded. 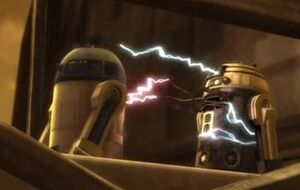