Power to migrate into other bodies

Killing and subjugating people to maintain his authority.

Eliminate anyone and everyone who would pose a threat to his grip on people.

Ra is the main antagonist in the 1994 science-fiction film Stargate.

He was portrayed by Jaye Davidson.

Ra was the last of an ancient technologically sophisticated race belonging to the planet Abydos. In time his body became weaker and began to die, but having the power to migrate into other bodies, he eventually came to Earth in pre-history and took over the body of a young boy. He enslaved the human race and and was worshiped as a god.

He created a portal/device called a Stargate that was able to transport any matter from a planet to another at the speed of light, including humans. Eventually, the slaves rebelled against his tyranny and forced him to leave the planet and the Stargate behind. His teachings gave birth to the Egyptian culture.

The Stargate was later found in Egypt in 1929, and eventually taken to a secret underground base to be studied. 65 years later in 1994, a symbolist and archaeologist named Daniel Jackson was called in to decode the seventh symbol embedded on the portal in order from it to function. After decoding it the government sent Jackson and a military unit through the Stargate to see what was on the other side. They were transported directly to Abydos but were unable to get back to Earth because Jackson couldn't decipher one of the symbols.

They eventually met the human population of Abydos and learned about the existence of Ra. Soon enough Jackson came to know about his evil tyranny and convinced the Abydonians to stop worshipping Ra as a god and rebel. In the meantime, Rà stole a bomb taken through the stargate by Col. Jack O'Neil and modified it to his advantage to destroy the living rebels on the planet. Ra tried to escape yet again but Jackson and O'Neil activated the ring transporter (teleportation device) of Ra's ship and sent the bomb up to the leaving craft blowing it up and killing the evil ruler.

Ra is often mentioned in the TV series Stargate SG-1, which picks up after his death in the movie. Ra's only on-screen appearance in the series occurs in the two-part episode "Moebius", in which SG-1 time travels back to Ancient Egypt and ultimately joins the rebellion against Ra. In this appearance, Ra was played by Jay Williams. Williams also portrayed Ra in the direct-to-DVD SG-1 film Stargate: Continuum, which featured Ba'al creating an alternate timeline in which the Stargate program never existed.

It is important to know that due to the series being created by a different crew than the motion picture there are many inconsistencies in continuity between the two products. In the film, Ra was the last of an alien humanoid race while in the series he is a member of a parasitic serpent-like species called Go'auld. In the film, it was never explained how Ra could migrate from a body to another while in the series it is stated that the Go'auld slip inside the host's body and entangle around the spine thus controlling the Host's brain. In the series, it is stated that the Stargate device was not created by Ra's race but belonged to a pre-human race called the Ancients. 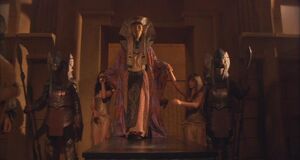 Ra with attendants and Horus Guards in Ancient Egypt.
Community content is available under CC-BY-SA unless otherwise noted.
Advertisement