Destroy Mario and his allies (failed).

Get his revenge on Rabbid Peach (formerly).

Rabbid Kong is a minor antagonist in Mario + Rabbids: Kingdom Battle, and the main antagonist of the Donkey Kong Adventure DLC. He is a gigantic Rabbid who resembles Donkey Kong and is made to fight Mario and his team by Bowser Jr..

After Bowser Jr. confronts Mario and his team and tricks Spawny into becoming his ally, he tosses the group a large banana and tells them that he would like them to meet a new friend of his. As Bowser Jr. flies off, Rabbid Kong smashes through a large pile of building blocks, grabs the banana from the team and begins to fight them. In order to defeat Rabbid Kong, the player must make their way up to a giant pressure plate positioned in front of Rabbid Kong, which will drop all of his bananas into a pit and leave him distracted and open for attack.

If the player attempts to attack Rabbid Kong before releasing the bananas, he will simply eat one of the bananas and regain all of the health he lost. Additionally, if the player stands in front of Rabbid Kong, he will attack them and deal fifty damage. After repeating this process three times, Rabbid Kong angrily tries to make his last stand by climbing to the top of a fragile stack of building blocks and beating his chest. However, Rabbid Peach knocks out one of the tower's blocks, causing the entire structure to topple and Rabbid Kong to fall off of the mountain.

Following his defeat, Rabbid Kong arrives at Princess Peach's Castle, where he finds the Rabbids' Time Washing Machine. After damaging it in anger, Rabbid Kong and numerous other Rabbids are accidentally sucked into the machine and warped to another dimension, Bowser Jr. also shooting one of Spawny's fusion beams into the vortex as well. Rabbid Kong and the other Rabbids, along with Rabbid Peach and Beep-0, are then sucked into an alternate dimension, where they find themselves on Donkey Kong Island. The heroes soon meet Donkey Kong and Rabbid Cranky who explain that the Time Washing Machine's parts have been scattered across the island and are guarded by hostile Rabbids who became merged with various objects. It's also revealed that Rabbid Kong has found a way to become even stronger by eating bananas that were dipped into water energized with the Supamerge's energy.

Rabbid Kong appears in Super Smash Bros. Ultimate as an Attack type primary spirit. He boosts the fighter's weight, making them more resistant to launches, but slows their movement. His spirit battle is against Donkey Kong wearing a Bunny Hood, with increased power to his punches and elbow strikes.

Rabbid Kong is best described as being driven and easily angered, if somewhat dimwitted and small minded. He is completely obsessed with bananas, and will try to harm or kill anyone he believes to be a threat to them. After being hit by the player and replenishing his health, he will arrogantly laugh at them, having taken enjoyment out of their attempt to hurt him. Despite his differences in size and appearance, much like the other Rabbids, he is mostly inept, climbing up the building block tower without realizing that it was unstable. Although he is extremely bad-tempered, obstreperous, belligerent, and unfriendly, in his supposed final moments, he photobombs one of Rabbid Peach's selfies in good spirit. 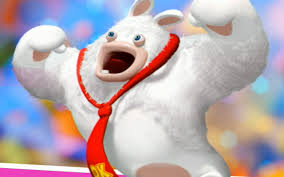 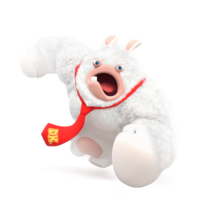 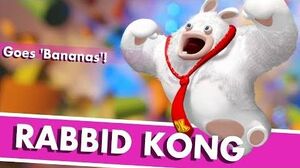 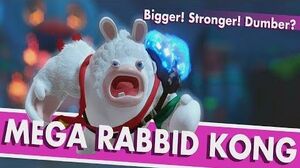 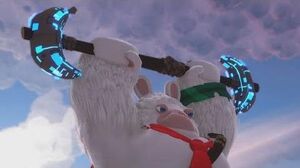