Killing its victims and guarding the cave of Caerbannog.

Slaughter anyone that comes in its way (failed).

The Rabbit of Caerbannog is an immensely cute but bloodthirsty rabbit-like monster, and a major antagonist in the 1975 film Monty Python and the Holy Grail.

Its vocal sound effects were provided by Ian Crafford.

The rabbit first appears when Arthur and his men have to go through a cave in Caerbannog to get directions to the Holy Grail and are warned by Tim the Enchanter that there's a horrifying monster in the cave and a cute bunny comes out. Arthur asks if it's "behind the rabbit" and is told by Tim that "it is the rabbit", much to Arthur's confusion. Since Tim refuses to let Arthur go through the cave while the bunny is there, he sends Sir Bors to kill it only for the rabbit to jump up and bite his head off, shocking Arthur and the knights as Tim states that he told them so. Arthur and the others rush to kill the rabbit, but it kills Sir Gawain and Sir Ector and forces the rest to retreat. Fortunately, Brother Maynard (a monk who helps Arthur) provides Arthur with the Holy Hand Grenade of Antioch, which requires the user to remove the pin, count to three and throw it. Arthur pulls the pin and, despite counting five instead of three, is corrected by Patsy the squire and throws the grenade, blowing the rabbit into smithereens.

This unpredictable "bunny" may look cute and cuddly on the outside, but inside, it is a monstrous killing machine. In spite of its bloodthirstiness and brutality, the rabbit appeared to be cunning at least for animal standards: When killing the knights, it often targets the vital parts of its victim's body to make a fast killing. Unlike regular rabbits, the mouth of the Rabbit of Caerbannog was full of razor-sharp canines which are similar with that of cats or other carnivorous animals.

The Rabbit of Caerbannog is surprisingly swift, violent, agile, deadly, aggressive, bloodthirsty, and carnivorous in close quarters. When attacking multiple foes, it quickly jumps to another target soon after swiftly attacking the first and giving those who fight it no chance to stop it. The only way to kill it is through distance, as King Arthur killed it with a Holy Hand Grenade. It is unknown if other weapons like crossbows or arrows also worked against it.

Ever since the Rabbit got popular, it has been used as an example of things that may seem good and innocent, but can in fact be extremely dangerous and murderous, and the fact that many different cuddly animals like the Killer Rabbit, can also have aggressive tendencies. In fact, only four years after the release of Monthy Python and the Holy Grail, a swamp rabbit attacked the U.S. President Jimmy Carter while he was out fishing, and got the nickname "Killer Rabbit." 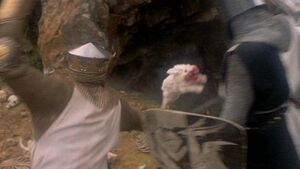 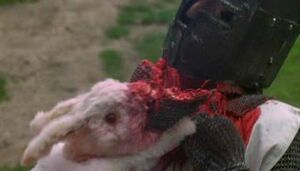 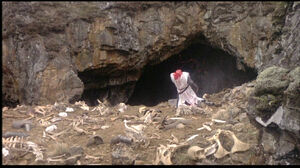 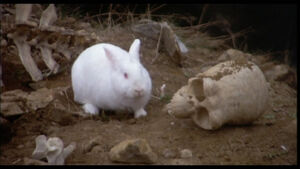 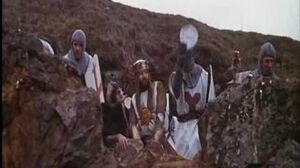