Being the fairest of them all

To be the most popular at Southern Atlantic University.

To ruin Sydney White's life and campaign for president. (Both failed)

Rachel Witchburn is the main antagonist of the 2007 film Sydney White. She is the head of the Kappas and takes an instant dislike to Sydney when she notices the romance developing between Sydney and her ex-boyfriend Tyler Prince.

She begins sabotaging Sydney at every chance she gets and seeks to prevent anybody, especially Sydney from outshining her on the Hot or Not website. As the movie itself is inspired by Snow White, Rachel is inspired by Queen Grimhilde. In the end, her horrible personality gets her kicked out of the Kappa sisterhood.

She was played by Sara Paxton.

Rachel was selfish, manipulative, vain, dishonest and had a great lust for power. She loved the attention and treated her Kappa sisters and the other students like they were around just to be at her every beck and call.

She didn't want to share the limelight with anyone which was why she ill-treated Sydney White as she saw her as a rival who was also trying to steal her ex-boyfriend Tyler from her, even though she had long since broke up with him and was constantly manipulating him into an on-off relationship.

Whenever she started to lose her cool, she would recite her favourite fashion and perfume brands to calm herself down. But she ended up freaking out in tantrums when she did lose it.

Sydney wants to be a Kappa, due to the fact that her mother, who was in the sorority, died when she nine years old. Prior to her death, Mrs. White wrote a letter to Sydney to be opened on her first day of college, which said she would be making longtime friendships there, and included pictures of her mother having good times with her sorority sisters. Unfortunately, the Kappas are led by the meanest of them all, Rachel Witchburn.

This leads Sydney to occasionally compromise her morals like when everyone is given fifteen minutes to find a date before meeting at a diner and she grabs Lenny, only to allow the Kappas to ditch him and stick him with the tab. Then later, she obscures the fact that her father is a plumber, due to shame.

As soon as Sydney arrived, Rachel took an instant dislike to her because of her being a legacy as her mother had previously been there and automatically a Kappa even though she is not Kappa material and also Tyler Prince, her ex-boyfriend who she had an on-off relationship with, appeared to be into her. Sydney was also seen by the other students to have a nicer personality than her, which made her extremely jealous.

Even though Sydney completes her initiation tasks with flying colours, she still refuses to welcome her into the sorority and publicly humiliates her at the gala by spreading lies and throws her out.

To make matters worse Sydney is steadily climbing the ranks over at the school's Hot or Not website, where Rachel has been #1 ("the fairest of them all") for years. In fact when she saw that Sydney's popularity was rising so quickly for the first time, she got so angry that she pushed the nearest passer-by into the lake while she was tanning with some of her fellow Kappas.

Rachel is also running for another term for student council president and aims to tear down the residence "The Vortex" where Sydney and the other students, cruelly nicknamed "The Dorks" are living and build a luxury center that will benefit only the top Greek sororities and fraternities despite Tyler's protests that there is plenty of vacant areas where this could be done.

Sydney decides to have one of the dorks Terrence to campaign against Rachel and prevent this unfairness to come into effect, but he is disqualified due to have already graduated from the college.

Later Rachel is even more furious when she sees that Sydney has now been ranked to #1 on the website.

When she finds out that Sydney decides to campaign against her herself, she hires a hacker to infect Sydney's computer with a virus called "The Poison Apple" which causes Sydney to be up all night finishing her assignments before the big debate, then going to sleep without setting an alarm.

The debate begins but Sydney is nowhere to be found, so Tyler finds her and kisses her awake after giving her a pep talk while she's asleep.

Rachel says nothing will change if she's re-elected, and then Sydney arrives and delivers a speech about how everybody should be treated as equals and not just by their appearance and popularity. Everybody agrees and Sydney wins the debate.

After losing the debate, the Kappa sisters confront Rachel and reprimand her for abusing her authority over the sisterhood and her selfish, derogatory attitude. They remove her Kappa pin and throw her out of the sorority.

Rachel then freaks out in a temper tantrum and storms off. 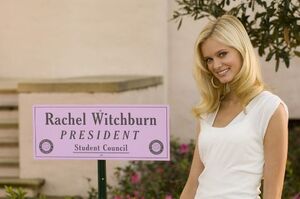 Retrieved from "https://villains.fandom.com/wiki/Rachel_Witchburn?oldid=3551961"
Community content is available under CC-BY-SA unless otherwise noted.