Luring people to the blood rave

Racquel is a minor antagonist of the 1998 hit vigilante thriller film Blade.

She was portrayed by Traci Lords.

A valued follower of vampire lord Deacon Frost presidential campaign , Racquel is a loyal vampire coven soldier assuming the role of supply running and of course "death dealing". She is capable of any manipulation boundaries towards men on a date turning a perfectly great night into an everlasting nightmare for mortal lovers.

During the movie's prologue, Racquel is seen driving wildly in thrill seeking mode with her date "Heat-seeking" Dennis a tourist out of town towards somewhere special where she claims is "A surprise!". They arrived at their destination point which is a butcher factory supplying various of corpses of Pig, Ox, and even silhouetted humans. Racquel leads Dennis towards what looks to appear as an underground party rave which is actually an annual bloodbath for vampire celebration. Racquel notices her friend Mercury which makes her stray away from Dennis, she strips down to her bra and begins dancing with Mercury. Dennis attempts to dance with them however, they push him away, with they're shoves being stronger than a human; soon after they danced endlessly on the main floor.

The club begins to rain fresh blood onto the patrons who revealed their ghoul like fanged faces at Dennis including Racquel. Racquel sarcastically asks Dennis what's wrong and she roars at him, she tried to attack him alongside Mercury. As Dennis tried to flee from Racquel and the army of bloodthirsty monsters, Blade the Vampire Hunter appears and engages a one-man army assault onto the patrons, surprising Racquel and the other vampires. The angry Racquel pushes the running vampires out of her way and tries to courageously confront the daywalker at prime, but is eliminated immediately after Blade overwhelmed Racquel at ease and slayed her with his signature Mossberg shotgun. 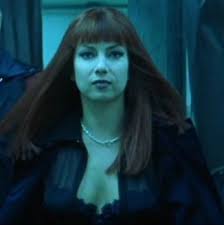 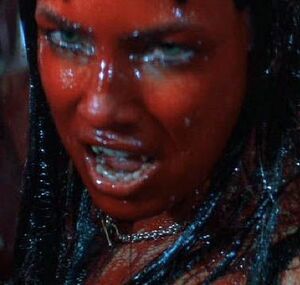 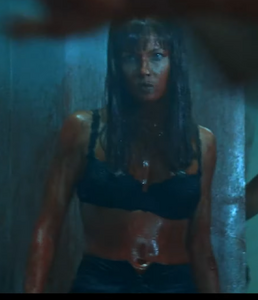 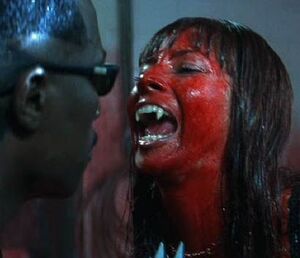 Racquel before she is killed by Blade 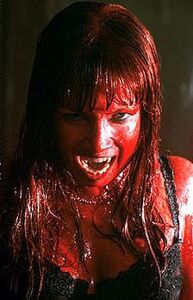