Radament is a villain of the 2000 dark fantasy, Diablo 2.

He use to be a member of good guys, The Horadrim, and then he served the prime evils as an undead. Mummified years ago, he became obsessed with the revival of his body by replacing his body parts with animal parts but people's bodies too. Two of his and his henchmen's many victims were Atma's, heroine, husband, and son. Radament and his followers made their lair in Lut Gloein's sewers.

They also wanted to enlarge their so-called spiritual power and that will aid them in the here on after and to protect their tombs from thieves. Radament The Fallen, is his aptly name by heroes, Cain and Drognan. It's probably because of him becoming a fallen hero when he died or something. It is unclear if the invasion of Lut Gloien's sewers were Radament's or The Prime Evils, main bad guys, and he says we live again. 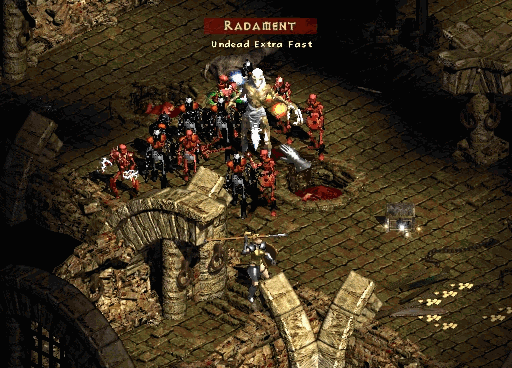 His name comes from Rhadamanthas, a judge of the dead and a brother of King Mino's. He has a special ability to move extra fast. Is or was a greater mummy creature, which is because of his experiments with humanity you know. One of Radament's arms looks human, with razor-sharp claws.
Retrieved from "https://villains.fandom.com/wiki/Radament?oldid=3422260"
Community content is available under CC-BY-SA unless otherwise noted.