Attacking planets and slaughtering their inhabitants.

Get his brother Goku to join the Galactic Frieza Army.
Kill Goku for being a "disgrace" to the Saiyan race (all failed).

Raditz is the older brother of Son Goku and the opening antagonist in Dragon Ball Z and Dragon Ball Z Kai. He is one of the last surviving members of the Saiyan race, and comes to Earth in search of his brother, to see if he had exterminated the native human race and taken over the Earth, as he was supposed to. However, Goku hit his head as a child and lost all memory of his mission and who he was. Raditz is also the first Saiyan to come to Earth, and at that point he was much stronger than Goku and Piccolo, who had teamed up to fight him. He is the main antagonist of the Raditz Saga and a posthumous antagonist in the Saiyan Saga. Despite only appearing in several episodes, he is one of the most important villains in the series as he was the one who revealed Goku's true origin. Furthermore, his arrival impacted most of the cast such as sparking the events resulting in Piccolo's redemption and Gohan's first use of his inner power. He is voiced by Shigeru Chiba.

Like most Saiyans, Raditz is a brutal and sadistic individual. He loves to fight and he will gladly kill any member of his family if it means coming out on top. He also shows no regard for his brother beyond giving him a second chance to prove himself. Despite being a heartless brute, Raditz is a coward in the face of death. To prevent being killed by Piccolo's Makankosappo, while Goku twists his tail in order to subdue him, Raditz "promises" to leave Earth and never come back. Because of his naivete, Goku releases him and he fights back.

While his sadism is what made him stand out at the time Raditz's cowardly nature contradicts the rest of the Saiyans whom would rather die in battle than flee. This means, on top of being a heartless brute, Raditz is a discredit to his own race as he pleaded for Goku to spare him. Furthermore, since part of the reason he disowned his younger brother was that he was a disgrace towards the Saiyans, this makes Raditz a complete hypocrite.

Despite having few redeeming traits, Raditz did praise Goku and PIccolo several times throughout their fight for holding their own. This shows that while Raditz is a coward, he does value a good fight like most of his race.

Raditz, like Nappa, also shows some care towards his fellow Saiyans. For example, when Vegeta revealed that he suspected that Freeza wiped out their race but was unconcerned, Raditz was shocked and even disgusted. However, one could assume the only reason he cared about Freeza's genocide is that his parents were among those killed.

Overall, Raditz, is nothing more than a vile coward and hypocrite with few redeeming traits. Not only is he more sadistic than all the other villains that appeared before his Saiyan allies, but he also proved to be a disgrace towards his entire race because of his cowardly nature.

Raditz, along with Nappa and Vegeta returned from their conquest on the Planet Shikk. However, when they returned, they were met with insult rather than congratulations by Dodoria, Zarbon, and Freeza. While Raditz was visibly hurt and angered by this, Nappa loses control and attempted to attack all three. But Vegeta orders his comrade to stand down, knowing that he would not stand a chance against them.

Upon arriving on Earth and discovering that everything on Earth is not destroyed, Raditz encountered a farmer, who tried to shoot him, but Raditz caught the bullet and threw it back into the farmer's head, killing him. During his search for Kakarot (Son Goku), Raditz encountered Piccolo, Goku's old enemy from the 23rd Tenkaichi Budokai five years ago, whose attack had no effect on him. Raditz was about to attack when his scouter picked up Goku's power level, and he headed off to find him.

When Raditz finally found Goku, he was shocked to see that his brother has changed and also discovers that he failed to complete the mission that he was supposed to, due to having his Saiyan characteristics permanently gone after having a nasty bump on the head. He also becomes shocked that Goku does not have his tail as it was removed a long time ago. He told Goku, and his friends that Goku is actually not from Earth and that he is from another planet and that he is an alien called a Saiyan. He also told them that he, Goku and two others were among the only members of the Saiyans and tells Goku that he is not from Earth, but that he is a Saiyan and is born on the Planet Vegeta and is part of the Saiyan race. Raditz then reveals to Goku and his friends that he is Goku's older brother. He also attacks when Kuririn when the latter tries to get him to leave; hitting him hard enough to send him flying into the Kame House.

Raditz kidnapped Goku's son Son Gohan to make him rejoin the Saiyans and locked him in his space pod. Goku and Piccolo teamed up to fight him, but Raditz was still stronger, managing to destroying one of Piccolo's arms. Piccolo was left with no choice but to use his Makankosappo, but Raditz dodged it. He then attempted to attack, but at that moment, Goku snuck behind him and grabbed his tail, causing him agonizing pain. However, he tricked Goku into letting him go, then stomped on him breaking some of his ribs. He then mocks his brother, calling him a fool for showing him mercy much to Piccolo's horror.

Gohan unleashed his hidden power and broke free of Raditz's space pod. He then flew in a rage and hit his uncle with his head, damaging him in the chest. As Raditz was about to kill Gohan, Goku gets him into a full nelson hold, sacrificing himself to defeat his brother, as Piccolo used the Makankosappo on them, fatally wounding them both.

However, Raditz did not immediately die from this attack; after his scouter transmitted what Piccolo said about the Dragon Balls to Nappa and Vegeta (and Freeza), he was laughing at Piccolo, who then finished him off with a shockwave attack, similar to the one used by Goku during the 23rd Tenkaichi Budokai.

This was also the beginning of the Z-Fighters vs. the Galactic Frieza Army.

When Goku meets King Yemma, he inquired about Raditz and Yemma replied that Raditz was being sent to Hell after he tried to fight him.

After being killed by Piccolo and then being revived with the Dragon Balls by Piccolo in Age 763, he despite having two Saibamen as supports he is outclassed by Piccolo who is a Super Namekian following his fusion with Nail. However Raditz is convinced he could surpass Piccolo if he trained which causes Piccolo to suggest he prove it by training with the Dragon Team.

Like nearly every villains in the Dragon Ball series, Raditz can fly, generate multiple ki Blasts, and possesses incredible superhuman abilities. He had a power level of 1200 which was enough to overpower both his little brother, Goku and Piccolo the latter of whom easily blew up the moon despite not training at all  after Raditz's defeat before mentoring Gohan. Raditz, like every other Saiyan can only turn into an Oozaru ape during a full moon.

Raditz is highly durable as he endured an attack from Gohan despite the latter being stronger than him. He, like his brother, also continued speaking after getting hit by Piccolo's Special Beam Cannon.

First, Raditz grabs the opponent and punches them. He proceeds to let loose a barrage of punches. Finally, the Saiyan warrior uppercuts the target away.

Raditz charges up to his opponent and attacks with a vicious combo attack comprised of punches and kicks, which can then be extended into a multitude of punches before finishing it with a roundhouse kick that knocks the opponent to the ground, inflicting a high amount of damage.

Raditz jumps into the air and delivers a flying kick covered in purple ki. Then, after flying over the opponent, he delivers another ki-charged kick to the back of his opponent.

Raditz quickly charges past the opponent as he says "Death is near!" and elbows them from behind onto the ground, inflicting great damage.

Raditz faces away from his opponent, then as they charge towards him to attack, he kicks out backwards and sends his opponent rolling away.

Raditz holds his right hand high in the air and forms a pink energy sphere that he fires off at the opponent, inflicting a great amount of damage.

First, Raditz raises back to his right upper side and forms a reddish-pink energy sphere. He then brings his hand together with the other in front of him and fires a bigger and more powerful Saturday Crush at the opponent, inflicting a massive amount of damage.

Raditz raises his hand and charges purple and orange electricity. He then forms the electricity in a large, purplish-pink energy sphere and strikes the opponent with it at close range, inflicting a large amount of damage.

Raditz charges a purple sphere of Ki in his hand. After holding their hand behind their head, they throws the sphere at the opponent, causing an explosion, and if the attack successfully hits, can paralyze the opponent for a limited amount of time.

Raditz raises his hand up in the air, and creates a small blue and white energy sphere. Then, he fires it at his opponent in the form of a large energy wave, inflicting a great amount of damage.

Raditz raises both of his arms up and charges two purple energy spheres. He then brings his hands forward and fires the energy spheres in the form of two energy waves at the opponent, inflicting a great amount of damage.

Raditz charges two Ki spheres in their hands and fires them as separate Energy waves which cause an explosion upon contact with the opponent.

Raditz jumps into the air while focusing Ki into his elbow. Then, he flies down and smashes the opponent's skull with his elbow, inflicting a good amount of damage.

Raditz charges up an energy wave. Then, he fires the blast into the air and finally brings it down on the opponent by pointing his hand down like a karate chop (hence the name).

Raditz jumps into the air and spins to gather flaming Ki around his body. Then, he rams into the opponent, ensuring burning agony.

Raditz can transform into a Great Ape when he looks at the moon, absorbing Blutz Waves. This form multiplies his power by ten. Thus, his power level in this form is 12,000.

Spirit Raditz is a form of Raditz which appears in Attack of the Saiyans, it is the form Raditz takes in Hell, and in this form, Raditz is strong enough to take on Goku (who had finished training with King Kai, Gregory, and Bubbles). However, despite the boost in power, he still lost after putting up a good fight. 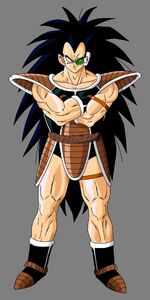 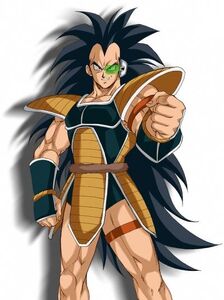 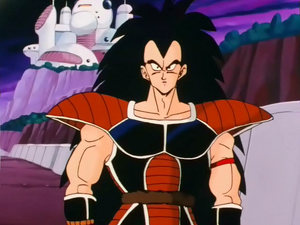 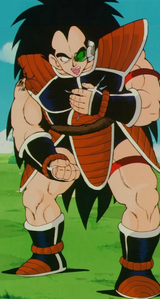 Raditz after being injured by Gohan's hidden power. 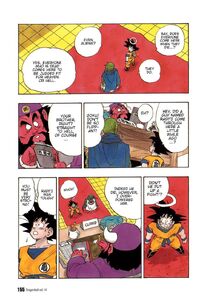 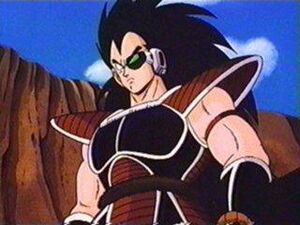 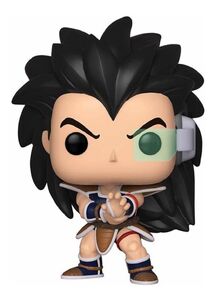 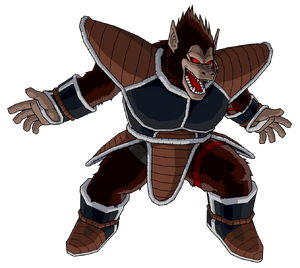 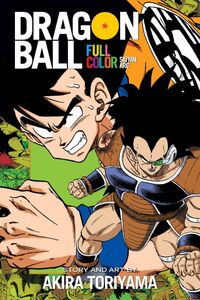 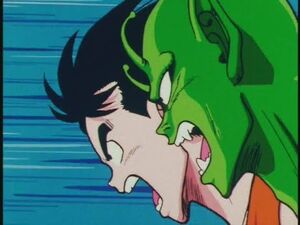 Goku and Piccolo vs Raditz! Behind You -Japanese Episode 4- 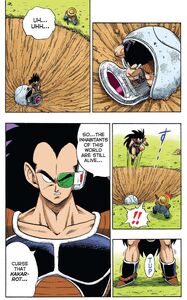 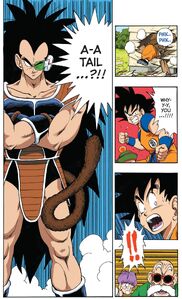 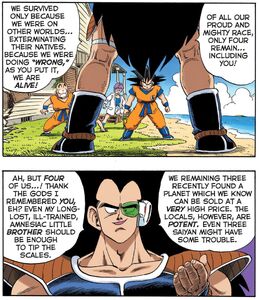