Rae Sloane was an Imperial captain, who served in the Galactic Empire. During her time in the Imperial Navy, she served as the captain of the Star Destroyer, Ultimatum. She was instrumental in its survival in the aftermath of the Battle of Endor, thus leading to the formation of the First Order.

While an Imperial cadet at the Defiance Flight Training Institute, she foiled a plot by Commandant Pell Baylo to assassinate Emperor Palpatine and Darth Vader. Sloane went on to rise through the ranks of the Galactic Empire's Imperial Navy.

Despite only filling in for the actual captain, Yale Karlsen, who was on assignment to a construction committee, she was proud to have achieved captaincy of a capital ship by the age of thirty, an Imperial Star Destroyer called the Ultimatum. She was charged with escorting Count Denetrius Vidian to the planet Gorse and was subsequently drawn into the Gorse conflict. During her tour of the Gorse system, Sloane foiled a plot by Vidian to destroy Gorse's moon Cynda and its thorilidereserves in order to enrich himself. Due to her efforts in saving Cynda and its thorilide reserves, Captain Sloane was given permanent command of the Ultimatum.

Later, Sloane tried to capture the rebel Kanan Jarrus by using his old friend Morfizoto lure him into a trap but failed. During the Battle of Endor, Rae Sloane served as a Vice Admiral in the Imperial Navy and commanded the Star Destroyer Vigilance. Following the Empire's defeat at Endor, she organized a secret Imperial meeting on the planet Akiva. After the New Republic liberated Akiva, Sloane fled offworld. In the following months, Sloane attained the distinguished rank of Grand Admiral, bestowed unto her by the mysterious Fleet Admiral Gallius Rax. While Sloane served as the public face of the Empire, Rax ruled from behind the scenes.

At the instigation of Rax, Sloane initiated faux peace talks with the New Republic. While visiting the New Republic capital of Chandrila, Sloane turned against Rax after learning that his attack on Chandrila involved using the controlled chip to mind-controlled former prisoners from Ashmead's Lock to assassinate New Republic officials. When Sloane objected to Rax's methods, her attache Adea Rite tried to assassinate her. After escaping Chandrila, Sloane joined forces with the former rebel Brentin Lore Wexley to hunt down and kill Rax. With the help of Brentin and the New Republic operative Norra Wexley, Sloane managed to stop Rax from destroying Jakku along with the Imperial remnant and New Republic fleets. After executing Rax, she, Brendol Hux, his son Armitage Hux, and several child soldiers onboard the replica of Emperor's yacht Imperialis and fled into the Unknown Regions. Whilst in the Unknown Regions, the remnants of the Empire eventually reformed into the First Order with Sloane as one of its initial leaders.

Although Rae Sloane was seen as a potential candidate to lead the First Order alongside Brendol Hux and Ormes Apolin, Supreme Leader Snoke ultimately rose to become the First Order's Supreme Leader, leaving Sloane surprised. Eventually, the last of the old Imperial leadership vanished from the First Order and Armitage Hux was the only one to be spared by Snoke, who saw him useful. It's unknown if this means that Sloane was killed under Snoke's orders or just forced to leave service. 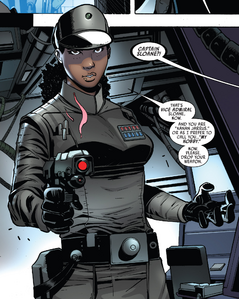 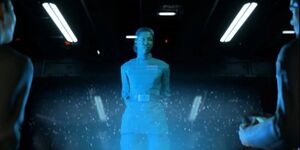