Leader of the League of E.V.I.L.

Rafaam is a recurring villain in the Warcraft spinoff Hearthstone: Heroes of Warcraft. His debut appearance is in League of Explorers, where he manipulates the titular League of Explorers into assembling the legendary Staff of Origination in order to become all-powerful, but they eventually stop his plan. Rafaam became the main antagonist of the story arc of the Year of the Dragon, assembling other Hearthstone villains into forming the League of E.V.I.L., with himself as the organization's leader.

He is voiced by Adam Grifford.

Arch-Thief Rafaam is an ethereal who craves power and superiority above all else. He tries to achieve his goal by searching for powerful ancient artifacts. His collection of artifacts (as shown in his collectible card) include the Lantern of Power, Mirror of Doom and Timepiece of Horror.

In Rise of Shadows, Rafaam assembles Madame Lazul, Hagatha the Witch, King Togwaggle and Dr. Boom to form the League of E.V.I.L. so they can all get revenge on the heroes who defeated them. He adopts the title Arch-Villain Rafaam and has the Warlock class, and his collectible card transforms every card in the player's hand and deck into legendary minions.

In terms of personality, Rafaam is utterly, proudly, and cartoonishly evil. He makes no excuses about his pursuit of personal power above all else, or about his sheer hatred of those who use their power to help others. As such, he is also very hammy, loudly prounouncing his hatred of heroes and his love of evil schemes whenever possible. His ultimate goal appears to be reanimating the deceased proto-dragon Galakrond and, of course, taking over the world.

Arch-Thief Rafaam is the central antagonist of the expansion's adventure. He waits for the League of Explorers to restore the Staff of Origination, an artifact that can grants the wielder unlimited power. However, once they do, Rafaam reveals that he had planned for the League to reassemble the staff before he takes it and animates the exhibits in the museum to attack the explorers. When the League of Explorers encounters him one more time, he summons the adventure's previous bosses to attack the heroes, but he is eventually defeated.

Hagatha, King Togwaggle and Dr. Boom are called to Madame Lazul's shack, and it is eventually revealed that they were all invited by Rafaam. As their plans were foiled by heroes, Rafaam gave them the opportunity to get revenge by forming the League of E.V.I.L. and steal the magical city of Dalaran.

When the fifth wing, the Kirin Tor Citadel, is unlocked, Rafaam leads the mission to defeat the Kirin Tor council and seize control of the city. Unlocked alongside him are Tekahn, Rafaam's most loyal lieutenant, and George the Fallen, a renegade Silver Hand Recruit whom Rafaam manipulated into joining E.V.I.L. by telling George to believe in him since his adventurer friends abandoned him. After the Kirin Tor is defeated, Rafaam laughs evilly as he claims the city is all his, before correcting himself by saying "ours" instead, suggesting that he only wanted himself to take all the credit for the plan.

After Tekahn summons the four Old Gods into Uldum, Rafaam claims that he got what he wanted and leaves Tekahn to fend for himself against the League of Explorers.

The five leaders of the League of Explorers revive the proto-dragon Galakrond from death, each using their own methods to resurrect him. Rafaam uses fel magic to resurrect him into Galakrond the Wretched, grinning during the whole process.  During this process, he threw every single one of his henchmen in the heroes' way to buy time. At this point, the story diverges between the Evil and Hero campaigns.

In the Evil campaign, Rafaam succeeds in resurrecting Galakrond and uses the undead dragon's might to annihilate the League of Explorers and their allies. He then flies Galakrond over to Stormwind to destroy the Alliance, which he does very easily. Rafaam then flies Galakrond over to Orgrimmar to destroy the Horde, which he does with a similar lack of difficulty. The Horde and Alliance's mightiest heroes fall before Galakrond and Rafaam. However, Rafaam also began bemoaning how empty it feels to win so easily. After all opposing forces are wiped out, Galakrond wished to continue destroying the world. Rafaam then faced his own creation in combat and killed it singlehandedly. It should be noted however, that several oddities in this story, including how Rafaam himself is the narrator and how he could kill Galakrond by himself, make it far more likely that this is simply a fabricated story that Rafaam is telling.

In the Hero campaign, the League of Explorers succeed in dispatching all of Rafaam's evil henchmen and Rafaam faces off against his nemesis, Reno Jackson, while attempting to resurrect Galakrond. Rafaam is successful, but before the monstrous dragon can destroy the league, Reno reveals that he is in-fact a dragon himself. As Elise Starseeker, the rest of the dragons, and the remaining League members arrive, Rafaam and Galakrond are overwhelmed by their combined might and Reno's new draconic magic. Galakrond is destroyed and Rafaam's plans are thwarted once again. The ending card shows the League flying heroically into the sunset. 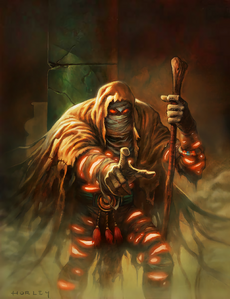 Rafaam in League of Explorers. 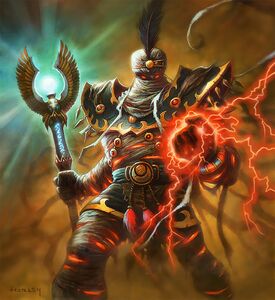 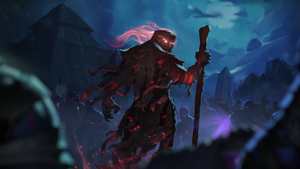 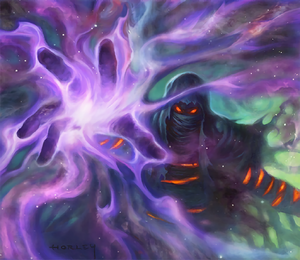 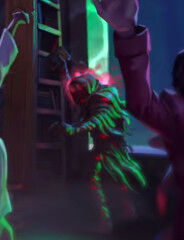 Rafaam sneaking into One Night in Karazhan. 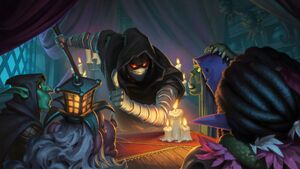 Rafaam gathers the League of E.V.I.L. 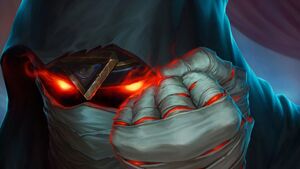 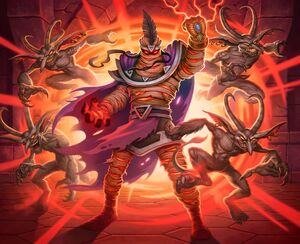 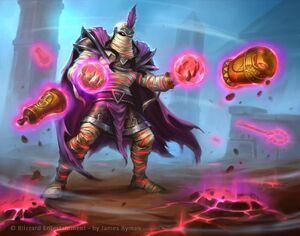 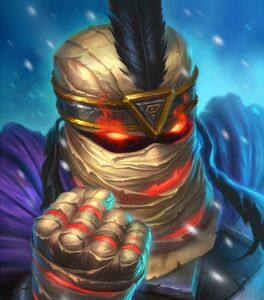 Rafaam in Descent of Dragons. 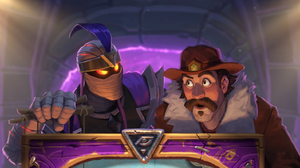