Servant of Dartz and Doma

Help Dartz collect as many souls as he needs to revive Doma.

Rafael is a supporting character in the Yu-Gi-Oh! franchise, appearing only in the anime filler arcs "Waking the Dragons" and "Grand Championship".

He is the secondary antagonist in Season 4 and a cameo character in Season 5. He was the strongest of Dartz's henchmen, Doma's Three Swordsmen, and acts as his right hand man and is one of Dartz's elite henchmen along with Amelda and Valon. He is particularly notable for holding a large amount of contempt for Dark Yugi.

He was voiced by Yoshihisa Kawahara in Japanese and Marc Thompson in English.

Rafael was affable and honorable even towards his opponents. He holds a great deal of love for his monsters including his ace monster who saved his life, Guardian Eatos. When Eatos is destroyed twice, he still holds a care for her.

When he manipulated by Dartz, he was driven into delusions by his so-called master. When brought his Guardian Dreadscythe, he declared he doesn't need his monsters.

During his final turn, he regained his good side by Atem when he was convinced that Dartz was actually using him to do his schemes. He gives a computer chip of Dartz's lair to Atem. When he learned that Dartz is the one who caused the miseries towards both him and his friends, Amelda and Valon, he shown his anger and attempted to kill Dartz only for the attempt backfired and died when his soul was taken.

He has good terms with Amelda. He shown his sympathy for his friend after his defeat by Seto Kaiba.

He doesn't have any trust on Mai Valentine despite they are allies. He declared he was right all along that she would outlived her usefulness when she was freed by Dartz. Despite this, he saved her lifeless body from the fall.

Growing up, Rafael had a perfect life with a wealthy and loving family but one day while they were on a cruise, it entered a typhoon caused by Dartz (though Rafael did not know this), and he was separated from his family, with them dying in the shipwreck (they forgot about him in the 4Kids version), and he became trapped on a deserted island. As he tried to find a city, which was merely an illusion, he was pulled underwater by Dartz, whom he joined up with. He then went to a graveyard and found the remains of his siblings there instead, confirming that his family had died in the shipwreck (found his Dark Duel Disk in the 4Kids version).

Rafael's main cards are the Guardian cards he kept with him during his time on the island. He dueled Dark Yugi and gave him the Orichalcos Card taking advantage of Yami's pride (which was enhanced because he was wearing Gurimo's Orichalcos necklace) and pointing out he'd 'have' to use the card to win (even though no souls were at stake due to Yami's pride he uses Rafael's card). Rafael still wins however and the Orichalcos almost took Atem's soul but got Yugi's soul instead. Rafael attempt to challenge Atem but stopped by Dartz due to the valley inhabitant by souls of evil. He threw his Orichalos necklace for Dartz to summon an Orichalcos soldier to defeat Atem only to defeat it by Eye of Timaeus with the assistance of Ironheart and Chris. After Rafael defeated his treacherous partner Mai when she wanted to duel Dartz, Rafael took the "Claw of Hermos" from the defeated Mai and given it to Atem before they began their rematch. However, Atem defeated Rafael but as the Orichalcos tried to take his soul, he overcame its power as he remembered his family and his beloved monsters. However, as the building collapsed, Rafael fell over the edge not before he gave Atem a computer chip for Dartz's location.

He survived the fall while carrying Mai Valentine's soulless body and soon finds Valon's as well and left them in a beach house and entered Dartz's temple, demanding him to release the captured soul, but Dartz instead revealed to him that he was the one responsible for the typhoon and also for the tragedies which ruined the lives of his friends Alister and Valon to encourage them to join Doma. An enraged Rafael attempted to use the Seal of the Orichalcos on Dartz but it backfired and took his soul instead.

He was released when Dartz and The Great Leviathan were defeated.

He made his last appearance in season 5 where he was seen searching for his family. 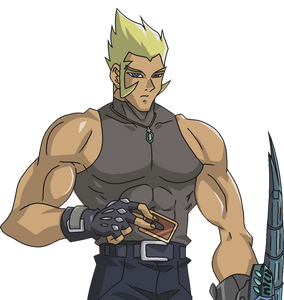