Obtain the treasure at Libertalia to prove that he is better than Nathan Drake.

He is a wealthy businessman who works together with Nadine Ross to find and claim Henry Avery's lost treasure for themselves so that he can prove himself better than Nathan Drake. He is also the former friend-turned-archenemy of both Nathan and Sam Drake.

He was portrayed and voiced by Warren Kole.

In search for the treasure of Henry Avery, Rafe made contact with Nathan and Sam Drake. They planned to search a prison in Panama where Avery was imprisoned in for clues. In order to do so, Rafe bribed a prison guard called Vargas to smuggle the three of them into the prison. Vargas led Nathan to a fallen part of the prison to search for Avery's cell but afterwards demanded a cut of the treasure. Rafe negotiated with the man and they eventually settled for a quarter but Rafe then stabbed Vargas, killing him. Before dying however, the guard managed to get a shot out of his gun and the guards were alerted.

Rafe and the Drakes were forced to flee the prison but on their way over the rooftops, Sam was shot and fell from the roof. Although Nathan tried to rush to his brother's side, Rafe convinced Nathan that Sam was dead and that they had to flee immediately. The two of them escaped by boat, both unaware that Sam was still alive. Although they succeeded with obtaining a golden crucifix from the prison, they found out that it was hollow and thus not contained the clue they were searching for.

Some time after the job in Panama, Rafe's parents died and left him their company as well as their fortune. Unbeknownst to Nathan, Rafe found out that Sam was still alive and bribed a guard to let him out of the prison, planning to use Sam to get the treasure. Sam, however, escaped Rafe and contacted his brother to find the treasure before Rafe.

After finding out that a second Avery cross was for sale at a black market auction in Italy, Rafe and his associate Nadine Ross went there. Unbeknownst to them, the reconciled Drakes and Sullivan had infiltrated the party to steal the cross. Rafe and Nadine spot Sullivan and both engage in small talk with him. They reveal to him that they have partnered up. Rafe then demands to know how Sullivan found out about Avery's cross and threatens him, gaining them the attention of the crowd. Nadine stops Rafe before he can go further. Sullivan then leaves the two.

As Rafe is the highest bidder for the cross, Sullivan bids against him to buy time for Sam and Nathan. Rafe does not call the bluff and continues bidding. Eventually, Rafe more then doubles the bid and Sullivan is unable to bid more without making Rafe grow suspicious. However, at that point Nathan cuts the power and in the cover of darkness Sam steals the cross. Rafe tries to follow him but is stopped by a security guard. The Drakes and Sully successfully escape the estate with the cross.

Rafe, Nadine and Shoreline eventually arrive at Libertalia. Nadine finds the two Drake brothers and attacks them but is overpowered. The arrival of Rafe and Shoreline mercenaries cause Sam to hold Nadine at gunpoint, claiming to shoot her should Rafe not be ready to make a deal with them. However, Rafe does not expect Sam to go through with it. Realizing that Sam is about to shoot Nadine, Nathan disarms his brother, thus practically surrendering to Rafe. He then tries to reason with Rafe, asking for a big enough cut to save Sam's life. Rafe is surprised when Nathan tells him that Sam claimed to have been busted out of the prison by drug lord Hector Alcázar who in turn demanded part of the treasure. Rafe tells Nathan the truth, that he was the one who got Sam out of jail. Disappointed in his brother, Nathan tells Rafe that he still needs both of them to find the treasure. Rafe responds that he is only half-right as Rafe only needs Sam. He fires his gun at Nathan but Sam jumps forward and takes the hit. Sam smashes in Nathan however, causing him to lose balance and fall over the cliff.

Rafe and his group eventually find the ship on which the treasure is stored but, due to Avery's traps, take many casualties on their way there. Nadine decides that enough of her men have died to find the treasure and prepares to leave but Rafe, who has taken over control over the Shoreline mercenaries, forces her to come with him. Onboard the ship, the rest of Rafe's mercenaries are killed when Sam triggers an explosive trap.

When Nathan arrives on the ship, he finds Rafe and Sam in the hold containing the treasure, with Sam pinned underneath debris. Nadine appears behind Nathan and takes his gun on Rafe's orders but then forces Rafe to give her his gun as well. With both men unarmed, Nadine claims that everyone who is obsessed with the treasure has died. She then locks up Rafe, Sam and Nathan in the burning cargo hold and leaves. Nathan tries to convince Rafe to help him move the log Sam is pinned under. However, Rafe draws a sword from the treasure pile and attacks Nathan. claiming that he could not enjoy the treasure knowing that Sam and Nathan were still alive. He mentions Nathan's past endeavors, revealing that he is jealous on Nathan's success.

Despite Nathan's tries to reason with the maniacal Rafe, Rafe continues fighting and is only defeated when Nathan cuts a nearby rope which holds a net containing a big heap of the treasure in the air. The pile drops right onto Rafe, crushing and killing him.

Rafe Adler is a cool, collected, authoritative, and influential man who uses the people under his employ, family inheritance and near-limitless money to the best of his abilities and will utilize people's own lives to assist in his own goals. He is constantly on the lookout for a find that would make him infamous, and desires to be known by a title that is just beyond his own family name which he strives to accomplish by locating and taking claim for Henry Avery's buried treasure. Rafe is someone who has never allowed bygones be bygones. He has shown to be extremely demanding and arrogant, the foundation of this being many of the people that work under him find Rafe unbearable, including Nathan Drake and multiple Shoreline mercenaries who constantly insult him behind his back.

Most of his shortcomings in his inability to locate Avery's treasure were sheer pride and monumental stubbornness. For example, though he excavated St. Dismas Cathedral for almost fifteen years and didn't find a single clue to the Gunsway heist, he still insisted on digging despite making no headway ever since. He is capable of being affable to his enemies but is extremely ruthless, vicious, psychotic, manipulative, and calculating. Though he is a businessman, he is much more concerned with his own benefit rather than mutual shares. He is much quicker to resolve a situation with violence, for example when Vargas attempted to exonerate him out of a share of the Gunway heist, he stabs him repeatedly. Though Rafe is intelligent and patient, his emotions tend to overwhelm his common sense. For example, when trapped on Avery's ship, instead of doing the reasonable option and working with Nathan and Sam to escape he chose to attack them instead, ignoring that the ship was about to sink. Coming from wealth, he normally uses his henchman to complete a task for him rather than get his hands dirty, but when pushed, Rafe proves to be an extremely able and determined fighter and can easily defend himself.

Near the end of his life, Rafe proves to be extremely bitter, callous, and unrelenting. While about to attack Nathan aboard the Gunsway, he sarcastically reviewed all of his accomplishments in an extremely vengeful voice. His overall jealousy and resentment towards Nathan Drake was founded upon. Although Nathan came from small beginnings, he accomplished great things, whereas Rafe came from fortune and all he had to show for it was his family name. He loathes things just being handed to him because of his aristocratic status and has never needed to fight for anything in his life, claiming that the only thing he earned was locating Avery's fortune and believes he deserves it above everyone else, attacking Nadine when she said otherwise. Rafe's ego and pride prevented him from walking away and ultimately resulted in his death; even when he had collected enough treasure, he still refused to give up with the knowledge that Sam would have a larger amount than Rafe and blackmailed Nadine into helping him. 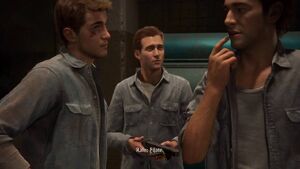 Rafe Adler with Sam and Nate. 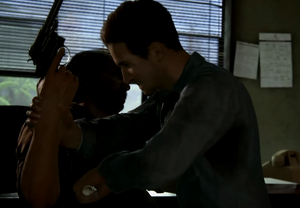 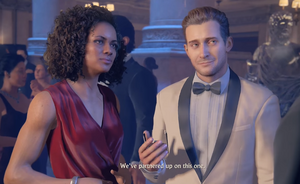 Rafe and Nadine during the auction at Italy. 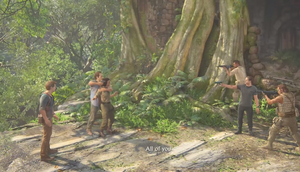 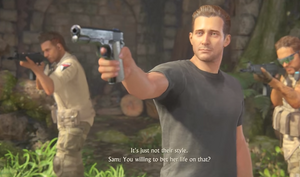 Rafe revealing the truth behind Sam's release from prison. 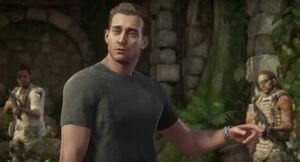 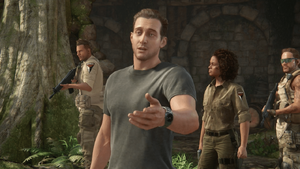 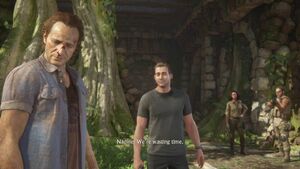 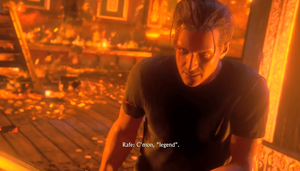 Rafe telling Nate to bring it on. 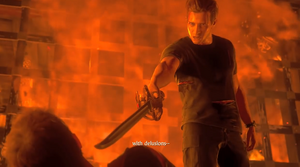