Peter Merkel despaired of having money. While the Rag Doll remained in hiding, Williams and the Flash departed for the museum to provide the next clue. On their arrival, they were waylaid by the Rag Doll's thugs. The Rag Doll himself drugged Joan with chloroform and stole the remaining clue. With these, he contacted  the Ultra-Humanite, a long-standing foe of the Justice Society of America. The Rag Doll became a founding member of the second generation of the Secret Society of Super Villains. The Ultra-Humanite had devised a machine that, for the sacrifice of ten heroes from the Justice Society and Justice League to be held in stasis, (five from each team), all the heroes on Earth would disappear. Each villain then was assigned a target and the Rag Doll took the Flash. After delivering a false tip to the Flash, the Rag Doll ambushed the hero on a freight ship in Keystone Harbor. After luring him into the hold, the Flash learned too late that all he would find there was a bomb, the explosion of which dropped the unconscious hero at the feet of his bizarre adversary.

As the other members of the Secret Society completed their task, the heroes were dispatched to Limbo, clearing Earth of costumed heroes. Unfortunately, the Ultra-Humanite had deceived the Justice League into helping and while the Rag Doll and his colleague waged a massive crime wave, the villains rescued the captured heroes in Limbo.

In the midst of the battle, it seemed that Ragdoll and the Gentleman Ghost betrayed their comrades, running away with the Key. However, Tigress witnessed the return of Johnny Sorrow, a happening which kills Ragdoll, though the ghost was prepared for it as he hands Sorrow his all-important mask. Sorrow then takes the rest of the Injustice Society to safety in the Crooked House, the former abode of Prometheus, and the Society must lick its wounds and curse the loss of the Key. It is revealed that Gentleman Ghost, Wizard and Icicle were expecting Ragdoll to turn on them, so they set him up to die.

Rag Doll appeared as a recurring antagonist in the animated series The Batman. It is unknown whether this Rag Doll was based on the original (Peter Merkel) or his son, the second incarnation (Peter Merkel, Jr.).

Rag Doll began his career as a solo thief. He immediately caught the eye of Catwoman who saw her competition as a threat. Rag Doll and Catwoman instantly had a rivalry, and the Batman's interference was not helpful either.

When trying to steal lost emeralds the Gotham Clock Tower, he got caught in one of the gears and lost the emeralds to Batman. He was then taken to jail for the first time.

The gang got along well until they realized they were only stealing penguin-themed items. Rag Doll attempted to quit, but Penguin threatened them with the newly-transformed Killer Moth. Rag Doll, with the rest of Team Penguin, was defeated by Robin. Rag Doll was taken to jail again.

Ragdoll is also seen amongst other villains in the episode "Rumors."

Rag Doll debuted in the fifth season of the Arrowverse series, The Flash, where will be portrayed by American's Got Talent contestant, Troy James. This incarnation is named Peter Merkel. It is unknown if he is Peter Merkel sr. or jr. 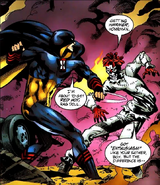 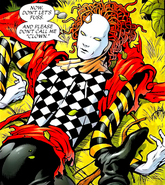 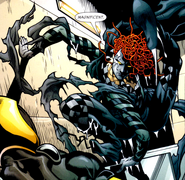 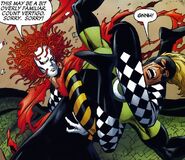 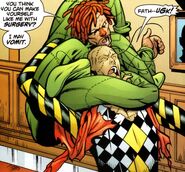 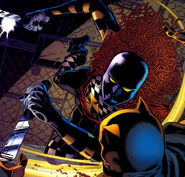 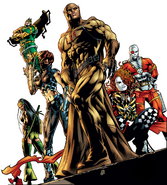 Retrieved from "https://villains.fandom.com/wiki/Ragdoll?oldid=3706328"
Community content is available under CC-BY-SA unless otherwise noted.