Chopsocky Dragon
Wu Xing Long, or Rage Shenron in the Funimation dub, is one of the Shadow Dragons in Dragon Ball GT and the dragon of the Five-Star Ball. He is the second Shadow Dragon to fight goku.

He was voiced by Chris Cason and Adam Hunter.

Rage Shenron, like all of the Shadow Dragons, was born from the negative energy of one of the wishes made on the Dragon Balls, in his case, the wish that brought Son Goku back to life to fight Nappa and Vegeta.

After Goku and Pan defeated Haze Shenron, they tracked one of the Dragon Balls to a deserted city. Before meeting the electric dragon, they found his "electric slime" scattered throughout the city absorbing countless electrical powers. Finally they met Wu, who declared himself to be the most powerful Evil Dragon, but they were unimpressed by him due to the fact that he barely reached Pan's waist. When they brought up Liang, Rage dismissed their victory and said that he was the weakest of the Evil Dragons. Despite his small size, the electric dragon sapped away their energy and stunned them with his electric slime, but it had no major effect. Wu then used his electric slime to create a titanic version of himself that he dwelled in. Goku quickly made the transformation into his Super Saiyan 4 form and they begin to fight. However, Wu managed to take most of his attacks, his slime body taking all physical attacks and when Goku attempted to use a Kamehameha, his body held the blast and then fired it back at Goku and Pan. Wu then began absorbing electrical energy to become even more powerful and seemed unstoppable. However, it began to rain and because Wu was full of electrical energy, he began to explode. While Goku and Pan watched from a distance, Wu attempted to command his slime to get in cover. But because he was too big, he could not escape and his titanic body exploded. Goku and Pan found the electric dragon in a pile of rubble and he agreed to give them his Dragon Ball. When Pan tried to take it however, Wu attempted to entrap her in his electric slime, but she managed to escape and Goku finished him with a Kamehameha wave.

Wu Xing Long, like most of the other Evil Dragons, has command over an element, in his case, electricity. He primarily uses this in the form of his electric slime which he can use to form a titanic body for himself. Wu can also absorb electricity from sources of it, such as electrical wires. 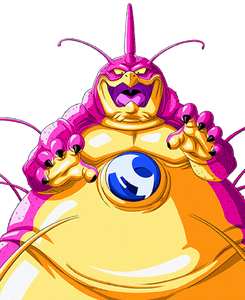 Wu Xing Long in his giant form.
Add a photo to this gallery

Retrieved from "https://villains.fandom.com/wiki/Rage_Shenron?oldid=4167453"
Community content is available under CC-BY-SA unless otherwise noted.