Kill Grey and all sheep in the valley (failed).

He was voiced by Andrey Barkhudarov in the Russian version, and by Rich Orlow in the English dubbed version.

Ragear is a rugged and experienced wolf who is determined to become the pack's new leader. Despite his pride in leadership, he is not liked among the wolves; they fear him because he is the strongest in the pack, as well as the evilest. Everyone's love for Grey angers Ragear, who cannot stand Grey or his silly antics.

Ragear despises the laws of the ancestors, according to which wolves must live in harmony with nature, only taking as much food as they need to eat and never killing for the sake of killing alone. Ragear thinks these are nothing but pointless and annoying limitations. Far from being noble, he is not the best future leader material, as the wolves and their retiring leader, Magra, would rather appoint a silly wolf like Grey than let Ragear take over and rule as a tyrant.

In contrast to his ruthless personality, he is also a coward because he intends to be feared by the others wolves rather than be genuinely respected like a true noble wolf. He has overall no sense of respect or gratitude, being still willing to kill Grey despite him saving Ragear from drowning in a cave. He is perfectly willing to kill children as well, seen when he takes Shia in hostage and threatens to kill him.

When Magra makes it clear to Ragear that he has no qualities in becoming the next leader, Ragear pushes Magra off a cliff and appoints himself leader, while also blaming Grey as Magra's killer and abolishing the laws of the ancestors.

When Grey is revealed to have transformed into a sheep and attacked two guards while rescuing two lambs from being eaten, Ragear rallies the pack to slaughter every sheep in their village. Meanwhile, Grey convinces the sheep to defend themselves, and they win the battle by trapping the wolves in a flooded cave. After Grey and the sheep decide to spare the wolves' lives and save them from drowning in the cave, Ragear continues his attack, taking Shia hostage. But Shia reveals he witnessed Ragear murder Magra, making the wolves turn against him.

Grey challenges Ragear to a duel for the leadership of both the wolves and sheep. After being turned back into a wolf by Mami and Bianca, Grey defeats Ragear, cornering him to a tree branch above a waterfall. At that last moment, as Ragear swore revenge on Grey and his friends, the tree branch breaks beneath him, causing him to plummet down the waterfall to his death.

Ragear gets angrier by choosing to duel by Magra.

Ragear facing stranged by Grey's craziness in turn a ram.

Ragear furiously with Magra, in him returning to the leadership of the pack.

Ragear killing Magra, taking the lead in the pack, saying, "But only as long as you’re alive!" 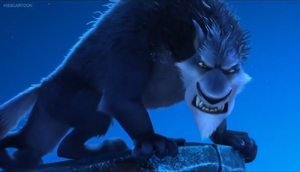 Ragear growling at the sheep kids.

Ragear mad at Bianca, suspecting that he was responsible for Magra's death.

Only for the tree branch to break beneath him, causing him to fall in the waterfall to his death.
Add a photo to this gallery
Retrieved from "https://villains.fandom.com/wiki/Ragear_(Sheep_and_Wolves)?oldid=3699509"
Community content is available under CC-BY-SA unless otherwise noted.