Become a kishin alongside Crona.

Ragnarok is a major character in Soul Eater.

He is voiced by Keiji Himeno in the Japanese version, and Sonny Strait in the English version.

Ragnarok is partnered with Crona, started out as a villain for most of the series, but redeemed himself when Crona did. Despite him redeeming himself, Ragnarok constantly talked down toward Crona making him more or less, an anti-hero. In the manga, however, the two return to Medusa's side. Eventually, Crona's mind bends too far into madness and, together with Ragnorok, the two kill Medusa and go on to become Kishin without her.

Ragnarok is a powerful creature whose blood was melted down and merged with Crona's by Crona's horribly abusive mother, Medusa. Ragnorok eats innocent souls rather than tainted ones, and as such lacks much sanity. He normally bullies Crona as in a way of an older brother, giving him/her noogies, taking his/her food, farting on him/her, and threatening him/her constantly in battle, the latter of which is a means of motivating him/her when losing a battle (e.g. "If he catches up to us, Crona, I'm gonna take all your dinner tonight!"). However, he is also shown to be quite protective of him/her, as he refuses to let anyone else bully Crona, and motivates him/her when Crona is winning.

He is also considered to be quite perverted, as shown when he occasionally flips up Maka's and Tsubaki's skirts. He is also shown to possibly be bisexual, in the case in which Crona was male, and he is shown flirting (and near-raping) with Crona, while Crona kept him from attacking Maka (In the anime, Crona simply has a fight with Ragnarok).

Ragnorok is able to enter and exit Crona's body at will, usually doing so from Crona's back. He is usually seen only from the waist up.

Despite nearly completely resembling a fully grown man, Ragnarok is a large, muscular being who is technically only a few years older than Crona. He has three spikes coming out of his neck, large, white hands, a giant "X" on his face located where his nose should be, and two eyes with "X"'s on them. Interestingly, his body feels human, however, due to being made mainly out of black blood, he is able to harden, as well as soften to liquid. He apparently has a mouth too, as when Crona was a child, he/she was smiling psychotically from all the torturous experimentation he/she endured, Ragnarok showed and smiled psychotically as well.

When in his weapon form, Ragnarok resembles a large medieval sword with spikes located on his stem. During his scream resonance, a large mouth appears on his sword and screeches. 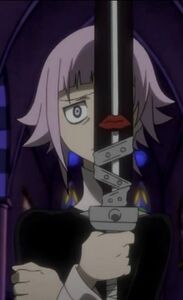 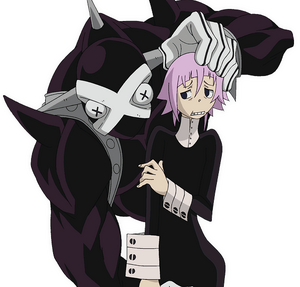 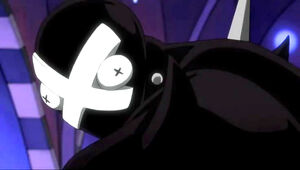 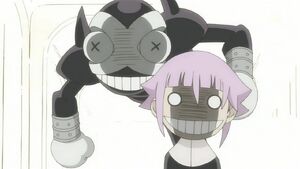 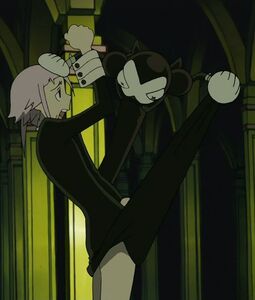 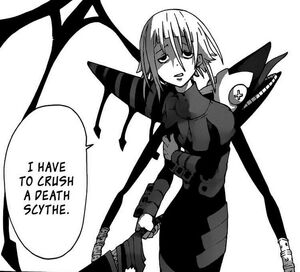 Retrieved from "https://villains.fandom.com/wiki/Ragnarok_(Soul_Eater)?oldid=4138529"
Community content is available under CC-BY-SA unless otherwise noted.