Ragyo Kiryuin is the main antagonist of the 2013 anime Kill La Kill, and the CEO of the Revocs Corporation, a facade textile company whose true goal was to assist the COVERS in the circulation of Life Fibers worldwide along with Nui Harime and Rei Hououmaru.

Ragyō's most prominent feature is her resplendent multi-colored hair, with a silver color on top. She has a very attractive and authoritarian appearance, and is at all times flaunting glamorous dresses. She seems to be quite tall as well. Much like her daughter, Ragyō is often accompanied by a blinding light that shines from behind her.

She also has seven scars on her back that greatly resemble the stars emblazoned in Goku Uniforms. The origin of these scars is unknown, but they are likely a result of her fusion with Life Fibers. Since the number of stars on Goku Uniforms indicates the percentage of Life Fibers in them, this might indicate that Ragyo's body is now composed of 70% Life Fibers.

Ragyō is a character bathed in luxury, and it shows in her overall presentation and attitude. She is vain and proud, and boasts her power and status abundantly. According to Rei Hōōmaru, her character and morals are at the very least questionable.

Ragyō, like Satsuki, is strangely willing to indulge the whims of her inferiors, and is quite personable with those loyal to her, and is similarly ruthless towards her enemies. However, she is individualistically cruel and sadistic, brutalizing and maniacally taunting Satsuki and tearing Ryūko's heart out simply to make a point. She enjoys domination and control, lusting for power over the world in order to give it to the Life Fibers.

Her cruelty has shown to be even more sinister, as she has been shown fondling (and even sexually assaulting) Satsuki and Ryūko, as well as herself in episode 23. All of this may be done because she merely enjoys dominating someone or something.

She was shown to have an unbreakable will (a trait she apparently passed on to Satsuki and Ryūko) and a strong devotion to the Life Fibers, having actively given her human soul to them. She treats Life Fibers as something divine and sacred, flying into a murderous rage when Satsuki steps onto the surface of the Primordial Life Fiber, something she views as a desecration. Conversely, she had absolutely no regard for human life, including her own, going as far as using her infant daughters as test subjects for potentially fatal experiments, and eventually committing suicide rather than accepting defeat after Ryūko kills all the earthly Life Fibers.

In her final moments, despite having failed, she believes that the Life Fibers will eventually return to Earth, and despite Ryūko's counterpoint that humans will remain human (and therefore remain capable of defeating them), Ragyō remains undeterred and even smirks before pulling out and crushing her own heart, dissipating into nothingness.

In her younger years, Ragyo discovered the Primordial Life Fiber, the originator of human clothing, and sought to use it to dominate all of humanity. She later married a scientist, Soichiro, to have access to his skills. Upon giving birth to a daughter, Satsuki, Ragyo attempted to infuse Life Fibers into her DNA, but Satsuki proved a failure, her body naturally resistant to Life Fibers. Regarding her first daughter as a failure, Ragyo experimented on her second child immediately after giving birth. After the experiments supposedy killed her daughter, Ragyo promptly rejected her as a failure.

Finally seeing Ragyo's true colors, Soichiro vowed to fight Ragyo and the Life Fibers. Ragyo ordered her men to kill him, but he secretly escaped with his second daughter, who had survived the experiments. Changing his name to Isshin Matoi, Soichiro raised his daughter, Ryuko, and founded the Nudist Beach to combat the Life Fibers. During this time, he created the Kamui Senketsu. At the same time, Ragyo raised Satsuki to be her successor, during which she repeatedly molested her daughter. Using the Life Fibers, she created Nui Harime to be the Grand Couturier of the Revocs Corporation. She then began selling Life Fiber-infused clothing around the world.

Years later, Ragyo finally located Isshin Matoi and dispatched Nui Harime to kill him and steal his latest invention, the Scissor Blade, which neutralizes Life Fibers. Nui succeeded in killing Isshin, but only managed to retrieve one side of the Scissor Blade, with Ryuko gaining possession of the other half. Seeking vengeance for her father's death, Ryuko enrolled at Honnouji Academy, which Satsuki was student council president of. During this time, Ragyo gifted Satsuki with Junketsu, a Kamui.

Ragyo later attended the Great Culture and Sport Festival, but this turned out to be part of a ploy to sacrifice those attending to the Life Fibers. Ryuko and Nudist Beach arrived to free those held captive. Ragyo was then betrayed by Satsuki and the Student Council, who sided with Nudist Beach. Satsuki revealed that she had been secretly working against Ragyo from a young age, after her father had revealed Ragyo's true intentions to her. However, Ragyo brainwashed the student body to turn on Satsuki, who managed to overcome them. Satsuki then managed to confront her mother personally. However, despite wearing a Kamui, Satsuki was no match for her mother, who brutally beat her and stripped her of Junketsu. Taking Junketsu for herself, Ragyo then ambushed Ryuko and tore out her heart, revealing that Ryuko was Ragyo's daughter. Nudist Beach rescued Ryuko and brought her to safety while Ragyo unleashed the Life Fibers onto civilization.

Ragyo captured Satsuki and kept her caged for a month, molesting her constantly. During this time, she had Nui construct Shinra Koketsu, the ultimate Kamui. She lured Ryuko to Honnouji Academy and captured her, brainwashing her and grafting Junketsu onto her body. After Satsuki escaped and joined Nudist Beach, Ragyo sent Ryuko and Nui to kill them. However, Ryuko's brainwashing was severed, and she separated from Junketsu. The Nudist Beach then prepared for the final battle against Ragyo.

Ragyo unleashed the Primordial Life Fiber and engaged her daughters in battle. Eventually, Nudist Beach apparently succeeded in destroying the Primordial Life Fiber. However, Ragyo continued the battle wearing Shinra Koketsu, with the Pirmordial Life Fiber having survived destruction. Upon being injured, Ragyo absorbed Nui and flew out into space, planning to activate the Revocs Communication Satellite and send the signal to cover the planet in Life Fibers. Ryuko pursued her into space and battled her mother, and ultimately managed to destroy the Life Fibers, returning Ragyo to human form.

The threat over, Ryuko asked Ragyo to return to Earth. However, Ragyo rejected reconciliation and crushed her heart, commiting suicide. Before vanishing into space, Ragyo warned Ryuko that the Life Fibers would return to Earth. 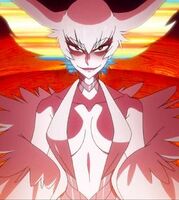 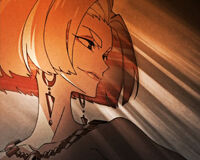 Ragyo is betrayed and stabbed by Satsuki 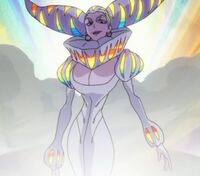 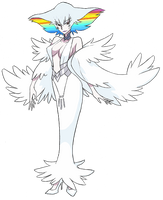 Retrieved from "https://villains.fandom.com/wiki/Ragy%C5%8D_Kiry%C5%ABin?oldid=1823285"
Community content is available under CC-BY-SA unless otherwise noted.