Rai Washio is a Namba child working as a supersoldier of the Seito government and a supporting antagonist in Kamen Rider Build.

Rai and his older brother Fu were raised by Namba Heavy Industries as Namba Children, being indoctrinated and undergoing brutal training to become soldiers.

After Kiba defeated some Seito Guardians as Owl Hazard Smash, Rai and Fu showed up and quickly dispatched the Hokuto Crow as Remocon and Engine Bro's. They then tell Grease to become a Seito weapon if he wants Kiba to live.

After torturing Kiba for a bit, Kazumi and Akaba appear and confront the Washio brothers and free their comrade. Grease and Akaba manage to escape with Kiba, but Grease later suffers a shot from Fu's Nebula Steam Rifle. Rai's brother attempts to kill Grease, but Kiba takes the attack. Akaba and Kazumi then escape to Sky Road to meet up with Sento and Ryuga.

Rai and his brother pursue them and are fought by Sento and Ryuga as Build Rabbit Tank Hazard and Cross-Z Charge respectively. However, the battle is interrupted when Kamen Rider Rogue appears.

During Seito's forces incursion on the Touto government office, Rai and his brother provided cover for Rogue as he went to acquire the Pandora Box. The Washio brothers fought Kamen Riders, Cross-Z Charge, Grease and Build, though Build managed to catch up with Rogue.

The Washio brothers later represented Seito alongside Rogue in a three-stage Proxy Battle with Touto. Rai was defeated by Grease in the first round. During Fu's fight with Cross-Z Charge in the second round, Fu got Ryuga to lower his guard by claiming him his brother would be executed if he failed, using Ryuga's hesitation as an opportunity to knock him out of the battle. Rai then appeared unharmed to gloat with his brother.

Engine Bro's and Remocon Bro's were later sent by Namba to keep an eye on Evolt as he met with Ryuga and Kazumi Sawatari to exchange the Pandora Box. After Evolt revealed he had no intention of holding up his end of the bargain (freeing Sento), he sent the two Kaisers to fight Kamen Rider Grease, not believing him to be worthy of challenging him. Engine Bro's was defeated along with his brother by Kamen Rider Rogue when he arrived, prompting Evolt to enter the fight himself.

Rai and his brother were later sent by Namba to accompany Evolt when he went to meet with Ryuga and Kazumi to claim the Pandora Box from them. After revealing he has no intention of holding up his side of the bargain, Evolt sends the two Kaisers to attack them, not deeming them worthy of being fought by himself. Kazumi transforms into Kamen Rider Grease and engages them, though whenever he obtained the upper hand, Evolt would interfere and allow the Kaisers to gain the advantage. However, Kamen Rider Rogue then appears and defeats both Engine Bro's and Remocon Bro's before turning his attention to Evolt.

After assuming his Black Hole form, Evolt declared to Namba that he would supplant him as the ruler of Seito, though Namba refused to give up his power and go along with Evolt's plans. In order to match up to Evolt's powers, Rai and his brother were dosed with more Nebula Gas by Nariaki Utsumi, though this had the side affect of killing them should they revert out of their transformations. As Remocon Bro's, Fu accomanied his brother, Utsumi and a squad of Hard Guardians to confront Evolt. Unfazed by Namba's refusal to comply, Evolt transformed into Kamen Rider Evol Black Hole and turned the battlefield to a barren valley for them to fight in.

After Evol destroyed the Hard Guardians, Remocon and Engine Bro's were sent in to fight him, though they fared little better against the powerful Rider. However, backup soon arrived in the form of the heroic Kamen Riders, though even with their combined power, they were unable to lay a scratch on Evol. Evol eventually decided to finish everyone off and used his Black Hole finisher to take out Rai Washio. Before dying, Rai tossed Fu his Fullbottle for him to transform into Hell Bro's with and bid his brother farewell. 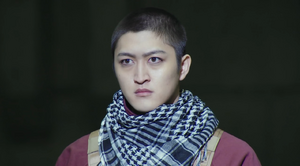 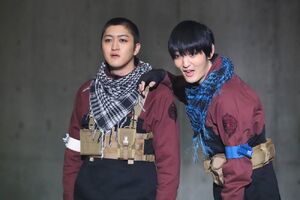 Rai and his brother. 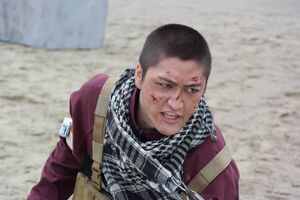 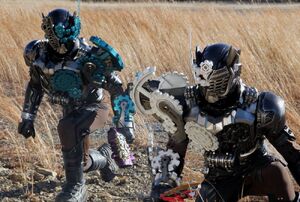 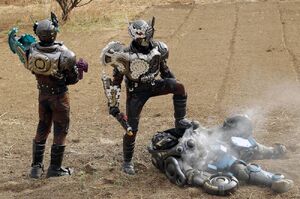 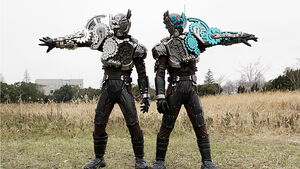 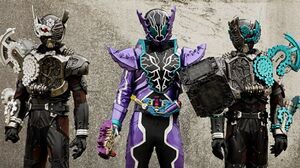 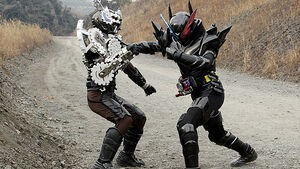 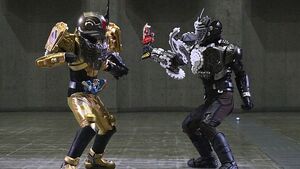 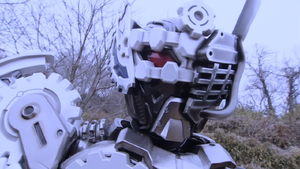