Ruler of the Heavens (formerly before he is defeated)

Ensure that Kubo is no longer a part of humanity by making him blind and immortal.

Kill anyone who stands in his way (both failed).

Raiden the Moon King, also known as The Moon King or Raiden, is the main antagonist of Laika's 4th full-length animated feature film Kubo and the Two Strings. He is the oppressive and totalitarian ruler of the night and the father of The Sisters and Kubo's mother. After defeating Hanzo, he seeks to kill Kubo's mother for betraying his family and to blind Kubo in order to make his grandson live with him.

He was voiced by Ralph Fiennes, who also played Amon Goeth in Schindler's List, Rameses in The Prince of Egypt, Dennis "Spider" Cleg in Spider, Francis Dolarhyde in Red Dragon, Lord Voldemort in the Harry Potter series, Lord Victor Quartermaine in Wallace & Gromit: The Curse of the Were-Rabbit, Hades in Clash of the Titans and Barry in Dolittle.

The Moon King became so angry and irritable when he found out that his daughter, Satiaru, was in love with Hanzo, a swordsman who questioned his way in ruling both Heaven and Earth, and eloped before she gave birth to his grandson Kubo. He then instigated the attack on Beetle Clan castle, Hanzo's home, and cursed him into a beetle-like hybrid who lose his memories. During the attack, he managed to steal Kubo's eye, but was stopped from taking the other one by Satiaru, who flees to the ocean.

As seen in the beginning of the film, Raiden tried to stop them by dangerously sent two tidal waves on them when they flee on the ocean, but lost them in spite of managing to injure Satiaru, leaving her sick and mostly active during the night. Raiden would later indirectly caused her first death through sending Karasu and Washi for Kubo upon pinpointed his location in the mortal world, leading her to use all of the remaining magic she has to reincarnate into Monkey.

Although he is not seen until the climax of the film, the Moon King drives most of the plot forward. His presence can be felt during the night even if he yet to descended to Earth, as he (off screen) pinpointed Kubo's location when the boy accidentally stayed out of the night and immediately sent Karasu and Washi to him. It's implied that the old man Kubo met in his dream whom suggested him to go for Hanzo's castle was actually a manifestation of Raiden himself, as both the old man and Raiden greatly resemble each other.

At the film's climax, he finally make his actual appearance when greets Kubo, as he wants to take Kubo's other eye in order to join his "family" and make him immortal like him. Kubo refuses, and an angered Raiden transforms into a monstrous dragon-like creature known as the "Moon Beast" and attacks. Despite landing several blows, Kubo is beaten and thrown into the village cemetery where the Moon Beast corners both him and the villagers. Kubo sheds the armor and re-strings his shamisen, using his mother's hair, his father's bowstring, and a strand of his own hair. He uses its magic to recruit the spirits of the deceased villagers, showing to his grandfather that memories are the strongest magic of all and can never be destroyed. Kubo uses the spirits to shield himself and the villagers from the Moon Beast and then engulfs him in their magic, defeating him.

To Kubo's surprise, his magic stripped Raiden from his powers and as result, the Moon King becomes a mortal whom, in his human form has no recollection of who or what he was. The villagers are compassionate and forgiving when they tell him that he was a man of many positive traits, thus convincing him that he was a good man and Kubo promise to tell all the stories he missed.

It is unknown what happened to Raiden afterwards, but it was likely that he joined the villages. Since the magic that Kubo used to defeat him also stripped him from his powers, it is fair to assume that he is now powerless whether he later regained his past memories as Moon King or not, and will finish his life as human, unable to threaten anyone ever again and having to provide for himself with normal means. With Raiden no longer a threat and the heavens no use without their leader, not only the earth and the village was safe, but Kubo was also allowed to stay outside and live with the villagers and no longer had to live inside a cave at night.

On the surface, the Moon King presents himself as a wise, composed, and imperturbable elder with nothing but his family's own good in mind. Even Satiaru, who has been on the run from him and his other daughters, claim that they do love her and her son, and that they simply want to do what is best for him. This displays an incorruptible and moral complication to his character.

However, despite this, the Moon King is shown to be much crueler, more despotic and more authoritarian than he lets on; this nature slipping occasionally as he talks to Kubo. He seems to be remorseless, unmerciful, and heartless for all three of his daughters, all of whom died, and seems to view his daughters and grandson not as actual family to cherish, but as possessions for him to have. When Kubo denies him, he turns into a Moon Beast with the intent of slowly and painfully killing him. It is also worth mentioned that, according to Satiaru, these negative personality traits of his, combined with the way he rule Heaven as the blasphemous tyrant were reasons why Heaven become cold and dark place during his reign.

The Moon King's opinion of the mortal realm and the people that dwell in it is very low, even describing it as being like "Hell" for the various flaws and horrors that dwell in it (despite being directly responsible for many of these horrors). He is metaphorically blind to humanity's goodness, something he wishes to make Kubo by taking his eyes, and was known to directly antagonized any human that questioned his rule (like Hanzo).

After his defeat, the Moon King was left with no memory of who he was, lost and confused of where and who he was. The villagers then go on to explain how he was a kind, caring, nonjudgmental and open-minded man, a standard that he himself now lives by with his grandson. He may actually have been this positive before, until he became consumed with bigotry and corruption later in life.

The Moon King acts as the standing ruler of the Heavens, and thus holds authority over both the Heavens and the Earth, though how far this authority reaches is never seen in full detail.

As his name suggests, the Moon King has powers relegated to the night. He was able to locate his daughter and grandson when Kubo accidentally stayed out after sunset, and was able to project his form through the moonlight. He was able to curse Hanzo into the form of an anthropomorphic beetle with the loss of his memories, and he was able to communicate with his grandson through his dreams. It can even be assumed that he was responsible for the creation of the Gashadokuro and the Garden of Eyes used to guard Hanzo's armor, and was even able to turn into a draconic monster himself. Despite being physically blind, the Moon King is fully capable of physical sight. Given the dark nature of his daughter's powers, it can be assumed that he is capable of all of the various forms of magic that Sariatu and the Sisters are capable of.

Despite all of this immense power, he does have his limits. The Moon King is vulnerable to the power of Hanzo's magical armor, the Sword Unbreakable managing to permanently blind him in his right eye. With the help of the townspeople and the memories of their loved ones, Kubo was able to defeat the Moon King, turning him human with no memories of who he was. 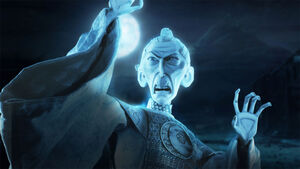 The Moon King attempting to break the magic barrier created by Kubo.

Raiden's defeat as Kubo and the spirits' magic strikes into him, being stripped of his powers.

Raiden as a mortal human. 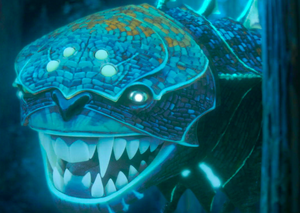 Raiden laughing wickedly.
Add a photo to this gallery

Retrieved from "https://villains.fandom.com/wiki/Raiden_the_Moon_King?oldid=3980312"
Community content is available under CC-BY-SA unless otherwise noted.