Leader of the Raimon Gang

Alien Criminal
Raimon Gaorufang is a lion-themed Gangler Monster who's a leader of Raimon Gang and is the main antagonist in episode 25 of 2018 TV series called Kaitou Sentai Lupinranger VS Keisatsu Sentai Patranger. Also he is equipped with a life tank bracelet-like treasure called Docteur, docteur.

Raimon Gaorufang has a red lion head with purple mane eating a white bone, his Golden Gangler safe is on his red chest and he has a grey belly, his shoulders are red and purple cat paws, on his purple arms where purple fish bones, the fish tail makes the purple cat claws, he has a purple collar with a purple gem on the middle on his red thighs, his legs are red yelling cat heads, his feet are red and grey cat feet and the top of the feet are yellow and red teeth that are the red cats lower jaw.

In episode 23 he'd made his first appearance along with his members of the Raimon Gang Ushibaroque the Brawl and Giwi Newzie were at the Gangler Mansion having a meal a bit early before their boss arrived.

A while later both he and Giwi were at Ushibaroque's hideout they'd ambushed Lupin Blue and Lupin X and his gold safe was about to be access by just one dial fighter, but that turns out to be an error, so the result he'd destroyed the Blue Dial Fighter thus detransformed Tooma from Lupin Blue.

After that both he and Giwi became the judges for this cooking contest between Tooma and Ushibaroque and once the contest was over they'd declared Tooma the winner causing Ushibaroque to be a sore loser and attack Tooma. Then they both appeared at the docks battling Lupin Red and Lupin Yellow.

In episode 24 Raimon made his second appearance at Giwi's hideout where Giwi bought more Lucky Charms from Zamigo Delma.

Then he'd appeared on the roof top asking Zamigo to be part of his gang. After that he'd enlarged himself to be even bigger than the Pat Kaiser and X Emperor Slash.

In episode 25 he made his third appearance as a giant taking out two megazords with his ability.

Then he'd appeared in the parking garage where wants to know if Zamigo wants to be part of his gang, but Zamigo declines, so for this response he'd attack him. However he'd draws the attention to the police where he then fight them instead. However when the cops used their finisher on Raimon it looks like they destroyed him, but thanks to the treasure that he has in his safe he'd revived himself and the battle continues and no matter how much damage Raimon takes he'll instantly regenerates himself as long as the treasure is locked away in his gold safe. However with the arrival of Noel he'd transformed himself into Lupin X and battles him instead.

However when Raimon thought Noel was going to access his Golden Safe it turns out he was acquiring the data from it and it turns out the gold safe requires two dial fighters because it has a 6-digit combination.

So with teamwork from both the thieves and police also with some help from Noel Lupin Red used the two dial fighters and he managed to gain access to Raimon's safe (which his password is 1-1-0-0-3-0) and got a Docteur, docteur (which translate as "Doctor, Doctor") Life Tank Bracelet. So without the treasure in his safe Raimon will be instantly destroyed once and for all.

However without the assistant from Goche Ru Medou he'd instantly enlarged himself, but this time instead of fighting two megazords he's battling just one which is the Good Cool Kaiser VSX after that he was finally destroyed by this finisher called Good Cool Kaiser: Vehicle Rush Strike. 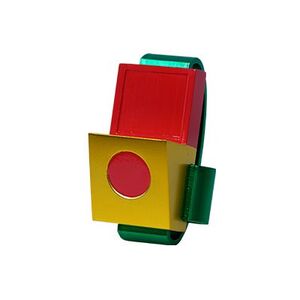