Making money (especially through embezzling and ripping off parents of other children).

Get rid of Sheldon Mopes (Smoochy the Rhino) by whatever means necessary (formerly; abandoned).

Get his TV show Rainbow Randolph Show and himself back on track (failed).

Randolph Smiley, or better known by his rainbow-clad TV persona Rainbow Randolph, is the former host of a children television show Rainbow Randolph Show, and he was the deuteragonist of the 2002 American dark comedy film Death to Smoochy.

He was portrayed by the late Robin Williams, who also played Walter Finch in the 2002 film Insomnia, Seymour "Sy" Parrish in One Hour Photo, and Merritt Rook in the Law & Order: Special Victims Unit episode "Authority".

Randolph Smiley was a natural, marginal Broadway talent who was hired by a children's television network called Kidnet to be the star of his own show, and so there was The Rainbow Randolph Show, with the host Rainbow Randolph, a friendly and enthusiastic man with an extremely effervescent and playful attitude wearing a white suit with his memorable colorful coat, a yellow bow tie, white casual shoes, a white bowler hat, and white gloves. However, on the dark side during his career and off the set, Randolph makes his business to take bribes from parents to have their kids a spot on his show, and he has been enjoying it in secrecy ever since.

However, unknown to the happily corrupt Rainbow Randolph, he is being watched by the Federal Communications Commission (FCC) who been probing his extracurricular activities on-and-off the stage, they have enlisted the help of the FBI who is involved to help to catch dirty crooks like Randolph Smiley red-handed in a despicable and blameworthy act.

One night, Randolph Smiley was in a Patsy's Warehouse restaurant in New York, meeting a married couple who approached him with a nice large sum of cash in exchange for their son to have a spot on his show. He tells them that he will call them when the spot on the show opens up. All of sudden, it reveals to be a FBI sting with two federal agents posing as the parents catching him in the act. They arrest him and take him away.

After that night, the news of it spread fast all over the media, newspaper, and everything else. His show was cancelled and Rainbow Randolph himself was out of business.

Six months later, while Randolph was currently broke and homeless, his replacement Sheldon Mopes was hired by Kidnet to take over his old timeslot and created his own show Smoochy's Magic Jungle.

Later, Frank Stokes, Randolph's old friend, reluctantly agreed to meet with him. They both met at docks of a pier outside New York City. Randolph begged him to give him back his old timeslot, but there's nothing Frank could do for Randolph. Randolph then sets a scheme to destroy Mopes' career and regain his show too all fail. While a live recording of Smoochy was going on, Rainbow Randolph sneaks into the prop room and replaces the healthy cookies with inappropriate shaped cookies (and reuniting with his old rainbow jacket). When Smoochy picked up the inappropriate shaped cookie, he improvises by saying that is a rocket ship. Enraged, Rainbow Randolph comes out of hiding and rants about the cookie is shaped like an inappropriate body part (with its nicknames) and then gets kicked out by security. Rainbow Randolph goes to Angelo Pike's apartment and explains he is homeless (since he was kicked out of the corporate penthouse), so Angelo allowed him to stay at his apartment. Mopes becomes enraged to learn that Burke signed him up to star in a Smoochy ice show he feels that the event will exploit children. Burke and Merv Green, the heads of the corrupt charity running the ice show, unsuccessfully warn Mopes from backing out of the event.

Soon afterward, Randolph, disguised as a Scottish gentlemen by the name "Mr. Benjamin McKnucklepeck", dupes Mopes into doing a Smoochy act at a neo-Nazi rally that is raided by the police under the presumption that it would be an award banquet held by the Parents for Decency in Children's TV organization. Smoochy is labeled a racist and fired. Rainbow Randolph was so excited for the downfall of Smoochy due to this incident, that he danced everywhere in New York. His fun did not last long, however, when Randolph came to Nora's place to get his career back, as he accidentally lets it slip to Nora that he framed Smoochy, he is beaten up by Irish mob boss Tommy Cutter and her men into confessing for his crime and then arrested.

While being taken out of the police station, he was crowded with news people and protesters. When asked how does it feel to be the most hated person in America, he claims he wears the hatred as a badge of honor. When asked about the accusations from Nora about his obsession with Sheldon Mopes, he claims he barely knows Nora. When asked about the rumors about him being mentally unbalanced, he attacks the guy who asked that question because he would deny that rumor. He felt someone touching his butt and told the protesters to get away from him and not to touch him, but one person throws an egg at him as he gets into the car. Smoochy's reputation and show are restored.

Later, at Angelo's apartment, in frustration, he smashes the TV which was airing Smoochy-related media with a lamp and calling Smoochy illegitimate and devilish parodies of real life characters such as Barney the Dinosaur, Teletubbies, Muppets, and anyone else before he gets kicked out of Angelo's apartment. Later, he attacks a person working at a donation table called "Save the Rhino."

Randolph, in a state of manic depression, was at the middle of Times Square preaching to everyone the pain he suffered at the hands of Smoochy.

He decided to end his life, for he can no longer live in a world where the innocent suffers and the wicked thrived, by pouring a small container of gasoline on him and lighting a match, willing to burn himself to death. That is, until he was saved by a little girl who he considered his angel right before her daddy grabbed her and took her to see Smoochy when everyone saw him arriving at Times Square. Randolph continued to contemplate his misery and his hatred of Sheldon Mopes.

After the death of Moochy (a.k.a. Spinner Dunn), cousin of Smoochy, police and angry mobs are hunting for Randolph due to the hatred for Sheldon Mopes. He goes into hiding in an abandoned biscuit factory until he finds a picture of Nora and Sheldon in a magazine. He then corners Mopes and Nora in their penthouse and threatens to kill them. They talk him down and discover that he is depressed and genuinely misses entertaining children. Mopes empathetically offers to let Randolph stay in the penthouse until he recovers. Sheldon also explains that he and Nora will go to the police the next day, telling them that Randolph is innocent of the death of Moochy.

Burke and Stokes hire heroin addict Buggy Ding Dong, another former host, to assassinate Mopes during his ice show. Buggy steals a backstage pass to get inside, but Randolph was informed by Angelo of Buggy being in his apartment and Rainbow Randolph goes to the ice show. Some of the people see Randolph at the ice show and wanted to take pictures with him (for the children at least). He took the pictures, signed some autographs, and went into the audience area. When he notices Burke and Stokes looking up and ran to the rafters, he realizes that Buggy is on there and runs up there. Randolph manages to tackle Buggy just as he tries to shoot Mopes from the rafters. Randolph and Buggy struggle for the sniper rifle, until Buggy falls to his death. The police then lifted Randolph to safety, but he faints after. After Mopes realizes that Burke and Stokes set him up, he chases after Burke into an alley. He pulls a gun and threatens to kill Burke, but Cotter and her men arrive and persuade him to stop as they will take care of Burke and Stokes. With Rainbow Randolph saving Smoochy, his reputation for his job as a TV show host has been restored.

The movie ends with Smoochy and Rainbow Randolph with Nora Wells as their co-host, launching a new show together. 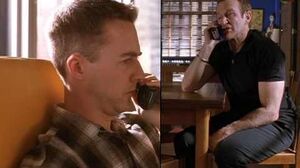 Rainbow Randolph is going on a Safari
"I'm going on a safari, mother--ker! Safari!" 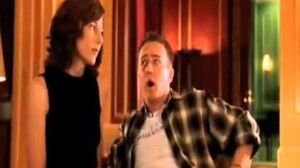 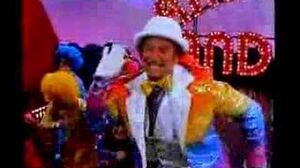 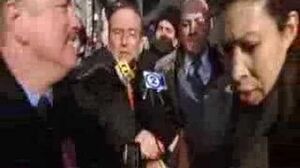 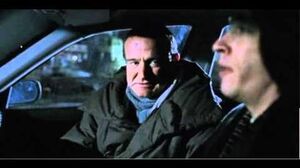