Kadir Suleiman, better known as Rais, is the main antagonist of Dying Light. He is a political figure who wants to maintain order after the outbreak on Harran and went undercover after his brother's death, calling himself "Rais". He has a file with a cure in it that Kyle Crane has to get from him.

He was voiced by Jim Pirri, who also played Grimbyte in Bunnicula, Clive Cross in The Amazing Deeds of Captain Wilkins, Akeel Min Riah in Call of Duty: Infinite Warfare, and Angelo Bronte in Red Dead Redemption II.

A local political figure, Kadir attempted to keep the peace among the populace during the Harran virus outbreak. At some point in time there was an attempt to evacuate him from the city. Kadir lost his brother, Hassan Suleiman in a "infected related incident". Angry over the loss his brother, Kadir blamed the GRE for his death and stole a file, codenamed "Tempest".

The file contained a incomplete synthesis of a possible cure for the Harran virus. He used the file as a bargaining chip against the the GRE. He threatened to expose the GRE using the file if anything happened to him. Kadir sent the file to someone he trusted with the order to release the information on the file if he was killed.

Afterward, Kadir retreated underground and took a leadership position with the Bandits, one of the two factions warring in the city, and renamed himself "Rais".

Life Prior to the Outbreak

Not much is known about Kadir's life before the outbreak in Harran. Photographs found during The Shadow of the King side quest suggest that he is ex-military, having served in what appears to be the Middle East or Africa.

During the spread of the Harran virus, Kadir was hired as a political figure and was tasked with maintaining peace in the city.[2] At some point, the Global Relief Effort planned to evacuate him and his brother, Hassan, but Hassan died in a "disease-related incident" before the evacuation was initiated. Kadir blamed the GRE for his death and stole a file, codenamed "Tempest".

The file contained an incomplete synthesis of a possible cure for the Harran virus. He used the file as a bargaining chip against the the GRE, threatening to expose them using the file if anything happened to him. Kadir sent the file to someone he trusted with the order to release its information if he was killed.

Afterward, Kadir retreated underground and took a leadership position with the Bandits, one of the two factions warring in the city, and renamed himself "Rais", the Swahili word for "President". Using his new status as a warlord, he would send his men out to recover GRE DROPs which contained Antizin, hoarding them and "gouging the hell out of anybody who wants to buy some".

GRE operative Kyle Crane was sent into Harran to locate Rais and retrieve the stolen file by any means necessary. Upon landing, he was attacked by Rais' men, but saved by Jade Aldemir and Amir Ghoreyshi, two runners from the Tower. In return for their help, Crane set out to recover an Antizin DROP for the Tower's survivors. When the DROP was flown in, Crane was instructed by the GRE to destroy it in order to force Rais to make contact. He hesitantly complies, setting it all on fire and telling the Tower that there was none.

After the destruction of the Antizin, the Tower's runners concluded that their only hope of obtaining some would be to meet with Rais and strike a deal. Crane offered to go to Rais' headquarters, with his underlying reason being to identify Rais for the GRE. During the meeting, Rais proposes that Crane works for him in return for antizin. He has him shake down survivors for protection money and fix the antenna in the slums to reopen radio transmissions, but only hands over a small portion of Antizin in return, much to Crane's vexation. Rais states that if he wants more, he must hand over Jade to fight in Rais' arena, which he refuses to do.

Eventually, Dr. Zere, a scientist from the Tower working on a cure for the virus, is kidnapped by Rais' men. Crane infiltrates Rais' headquarters in an attempt to rescue him, but is captured and forced to battle in Rais' arena against waves of infected. After winning, Rais orders his men to execute Crane, but he kills them, serves off Rais' right hand with an machete, and barely escapes with his life.

Not long after Crane enters Sector 0, Rais captures Jade and holds her at the city's museum, hoping to lure Crane into a trap and kill them both. Crane battles his way through the museum and finds Jade to be bitten and minutes away from turning. Knowing that Crane is infected too, Rais appears and throws them only one shot of Antizin, making them choose over each other. Ultimately, Jade gives Crane the shot, and he is forced to kill her after she turns. Crane swears revenge on Rais from this moment on.

In the game's finale, Rais announces to Crane that he made a deal with the GRE. He plans to give them the file in return for an evacuation, and will watch as they weaponize the virus and profit from people's suffering. Crane hastily travels to Rais' tower to stop him. After evading numerous infected including virals and volatiles, Crane comes face to face with Rais on the rooftop, with Rais' throws a throwing knife into Crane's collarbone. The two brawl as the GRE evacuation helicopter hovers overhead. Crane eventually survives, stabbing Rais in the neck and throwing him off the edge to his death.

Suleiman appears as a sadistic, violent individual. He takes pleasure in using aggressive measures to obtain what he wants, and he doesn't hesitate in using lethal force to take down any complications. He is extremely manipulative and often forces others to bend to his will. It is possible that these violent traits come from a mental instability, or a lust for complete dominance.

Rais constantly hoards Antizin from air drops, then sells it to other parties for an extreme price. This exposes his hunger for power and greed for wealth. He also fools desperate survivors into running errands for him in exchange for goods, ultimately denying them what was promised.

Rais will punish his soldiers for mishaps, and usually murders, injures or dismembers them for small failures. In one instance, he shoots a soldier in the arm for drinking alcohol. Later, Crane manages to punch Rais; instead of punishing Crane himself, he takes an rifle and kills the two soldiers who were supposed to restrain Crane.

Rais starts out as a philosophical villain who is cold and ruthless to everyone, even his own men. By the end of the game, he becomes a mocking troll, constantly taunting Crane. In the finale, Crane becomes so annoyed by Rais, he is willing to forget about getting revenge. It's the Rais' actions that force the final battle between them. 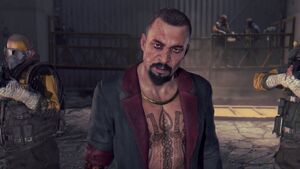 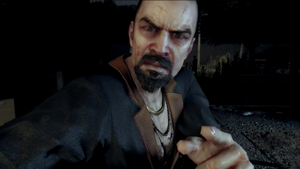 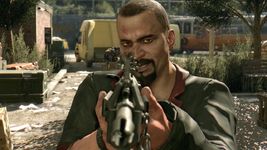 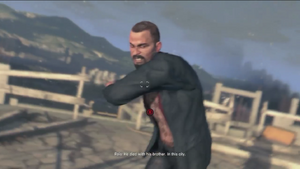 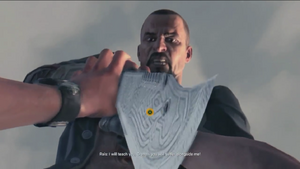 Rais about to kill Crane. 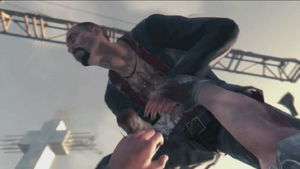 Rais stabbed with his own machete by Crane. 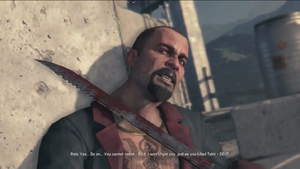 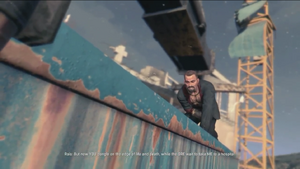 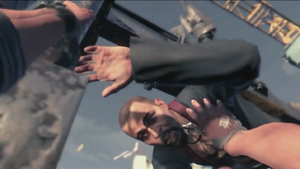 Rais stabbed in the neck by Crane. 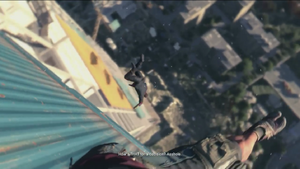 Rais falling to his death.