Head of the Bioquimek Corporation facility

Develop a virus that would turn every human into monsters when they came into contact with a member in Satan's army.

Bring back Satan's rule on Earth.

Raisa Volkova is a major antagonist in Castlevania: Lords of Shadow 2. She is the head of the Bioquimek Corporation facility and one of Satan's Acolytes.

She was voiced by Alex Childs.

Raisa Volkova, in her human identity, served as the head of Bioquimek Corporation, which located in the Science District in Castlevania City. In order to prepare for her father's return, Raisa spent ten years in her facility developing an artificial demonic virus, with the full intention to develop a toxin that would turn every human into monsters when they came into contact with a member in Satan's army.

For a decade, Raisa and her minions kidnapped hundreds of innocent human and committed atrocities to them such as torture and human experiments, using her virus to turn human beings into demonic monsters, which spawned the Possessed Citizens that acted like feral beasts who rampaged across the street, hunting down those who stood against Satan.

Five months before Dracula's return, Raisa locked her own company down to buy herself time and develop "perfect" virus. After Dracula had returned, he had infiltrated Raisa's facility not long afterwards when he suspected someone in Raisa's facility to be an Acolyte. When Raisa discovered Dracula's intrusion, she released the toxin and transformed herself, along with several of her employees, into demonic monsters that attacked Gabriel in a following fight.

Gabriel defeated Raisa and captured her, taking her back to Zobek for interrogation whilst doubting whether she really was an Acolyte. However, Raisa refused to speak about Satan's plan and Zobek could not read through her mind, as it was shrouded with clouds because of her toxin's influence.

As a result, Gabriel returned back to the facility, looking for an antidote that would turn Raisa back to human. Nevertheless, after she was injected with the antidote, Raisa transformed into her true demonic form instead of her human form, revealing herself to be Satan's daughter and intended to kill both Dracula and Zobek. Eventually, Dracula successfully killed her with Zobek's assistance. 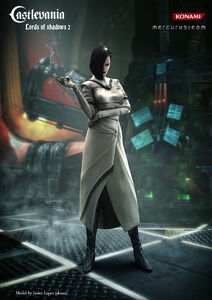