Sidekick to King Togwaggle
Lieutenant of the League of E.V.I.L.

Rakanishu is a recurring antagonist in Hearthstone: Heroes of Warcraft. He is a small fire elemental who acts as the light source to King Togwaggle's lantern, and serves as the Kobold King's evil sidekick. In Rise of Shadows, he followed Togwaggle as he joined the League of E.V.I.L., assisting him in the League's evil plans.

Befitting his nature as a fire elemental, Rakanishu is a pyromaniac who enjoys burning everything around him with his flames. He is loyal to his master Togwaggle and assists him in his evil plans, with Rakanishu being an expert in crime as he calls himself a "criminal element" and knows about arson and assault. He enjoys raiding Dalaran as there are many flammable objects there, and feels excitement in burning important places like libraries and markets. Rakanishu is also shown to be sadistic, as he relishes in everything burning while laughing maniacally and even tells Applebough, a treant, that she looks very flammable.

Rakanishu makes his debut alongside his master Togwaggle, living in the king's lantern. King Togwaggle appears as one of the final bosses of the expansion with Rakanishu assisting his master during the battle. He guides Togwaggle to find treasures to use, and intervenes during the fight deals 4 damage to one of the player's minions.

Rise of Shadows / The Dalaran Heist

The League of E.V.I.L. was formed when Rafaam invited an ensemble fellow Hearthstone villains to Madame Lazul's hut. Togwaggle was one of the villains who joined, and Rakanishu accompanied his master in the League's plans.

In The Dalaran Heist, Rakanishu makes an appearance as one of the nine playable lieutenants of E.V.I.L. representing the mage class, unlocked from the start alongside the bank robbery wing led by Togwaggle. His possible Hero Powers are Fireblast (the default Mage Hero Power), Burning Wit (a 1-cost Hero Power which reduces the cost of a random card in the hand by 2 mana) and Frostburn (freezes a character, or deals 2 damage to them if they're already frozen).

Saviors of Uldum/Tombs of Terror

Rakanishu appears as Tekahn's boss fight, setting the stats of Tekahn's Lackeys to 4/4 for the rest of the match upon being played. As Dark Pharaoh Tekahn's appearance as a collectible card has this same effect, Rakanishu is either the source of Tekahn's empowerment, or he is simply a substitute due to Tekahn already being represented as the boss. If Rakanishu is killed, Tekahn says "No! Do not tell Togwaggle."

Rakanishu appears as a playable hero in the third-last boss fight in the E.V.I.L. wing, against George and Karl, set after Karl was able to help George the Fallen come back to his senses and reform. (Karl also reforms George in the League of Explorers' route, but there Rakanishu is not encountered at all.) Rakanishu returns to Dalaran's town square, with Rafaam telling him to burn the town down because if E.V.I.L. can't have it, no-one can.

In the fight, three market carts are spawned on each side, and Rakanishu's first Hero Power, "Burn..." destroys one of the carts. Once all carts are destroyed, he transforms into a huge dragon-like form named Rakanishu, Rekindled, and his Hero Power becomes "BURN!!!" where he deals 3 damage to all enemies. From then on, his goal is to defeat both George and Karl, who are a duo hero with a swapping-out mechanic like in their Kobolds and Catacombs boss fight. 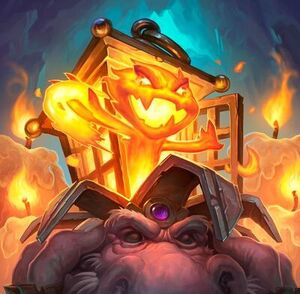 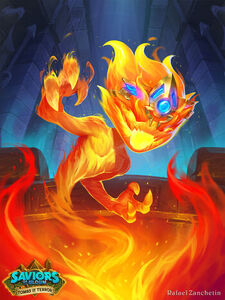 Rakanishu in Tombs of Terror 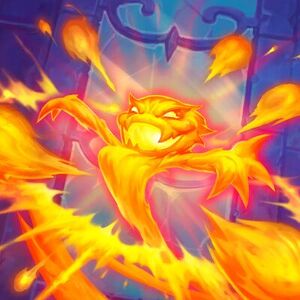 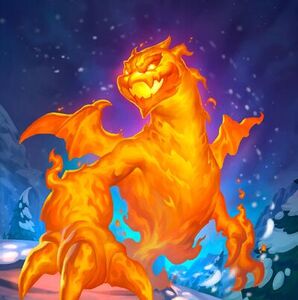