Live their lives undisturbed in a harmful and destructive way. (further individual goals may vary)

A Rakshasa (Sanskrit राक्षस) is a type of demon that exists in both Hindu and Buddhist folklore and mythology as well as religion - they are seen as man-eaters and cannibals as well as wicked creatures akin to the Western concept of devils, they have conflicting origins depending on the text but are generally believed (at least in Hindu texts) to have been particularly wicked humans who were transformed into their demonic state via reincarnation - despite their largely negative nature it was believed that there were good Rakshasas as well as evil ones.

The origins of the Rakshasas is unknown due to conflicting stories - according to the Hindu epic known as Ramayana, Rakshasas were created from Brahma's foot; other sources claim they were descended from the god Pulastya, or from the ancient Khasa, or from the gods Nirriti and Nirrita.

Rakshasas were notorious for disturbing sacrifices, desecrating graves, harassing priests, possessing human beings and generally causing destruction and mischief. Their fingernails were said to be venomous and they fed on human flesh and spoiled food.

They were adept shapechangers and magicians with a talent for casting illusions. 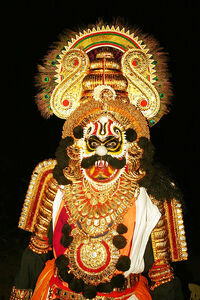 Yakshagana is a known Rakshasa.
Community content is available under CC-BY-SA unless otherwise noted.
Advertisement