Burn Camelot to the ground (both failed).

Ralf is the secondary antagonist of the 1995 film First Knight.

He was portrayed by Ralph Ineson, who also portrayed Chris Finch in the UK version of The Office, Amycus Carrow in the Harry Potter film series, and SkekMal in The Dark Crystal: Age of Resistance.

Ralf is the second-in-command of the regenade knight Prince Malagant. He is first seen assisting him in destroying a village to terrorize the inhabitants. With a detachment, he orders the men with him to burn down a barn with some people hidden in it. After the pillaging is done, he assists to Malagant's rant about his motive.

When Lady Guinevere is brought to Camelot to marry King Arthur, Ralf organizes an ambush to capture her. He sends a first bunch of knights on foot. After they are pushed back, he emits a characteristic hissing sound. As a result, a bunch of cavaliers comes out and attack the convey. The attack is repelled once again.

Ralf is with Malagant when he tries to negotiate with Arthur and waits on the other side of the Round Table room. The negociations fail however and then Ralf is tasked to kidnap Guinevere. He succeeds to do so and brings her at Malagant's ruined castle. He takes her in front of the renegade knight. The latter notices that her robe is torn and naccuses Ralf of mistreating her. Ralf tries to deny but is brutally hit in the face by his boss. When asked again, he admits having doing so even if in fact, this is not true (Guinevere has torn her robe to leave a trace to Lancelot to facilitate him her rescue).

Ralf participates in Leoness's ransacking in retaliation for Guinevere being saved. Learning that Arthur' forces are coming, Ralf organizes an ambush during the night. Noticing Arthur' tents, he lauches the assault but much to his horror, it is revealed to be a trap organized by Arthur. Seeing Arthur's cavalry coming toward them, he orders his troops to attack. However, Camelot' forces prove too strong and he and Malagant run away.

Ralf is present when Malagant attcks Camelot by surprise with his army. When Arthur refuses to submit, Ralf and some Malagant' men shoots Arthur to death with their crossbow. Ralf kills several inhabitants of the city with his sword. A crowd assails him, forces him to disembark his horse and hold him down. One of the attackers takes his sword and stabs him in the stomach, killing him and thus avenging King Arthur.

Ralf is loyal to Malagant to a almost fanatical degree. His loyalty is such that he doesn't even protest when Malagant hits him full in the face with his fist, and takes responsibility for tearing Lady Guinevere's robe off, even if he hasn't.

Ralf is a good strategist capable of organizing complex schemes like the kidnapping of Guinevere, done with a boat tied to a horse drawn carriage. 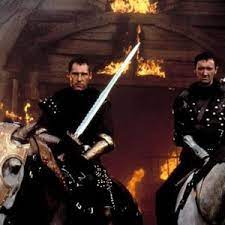 Ralf (to the right) with his leader Malagant (to the left). 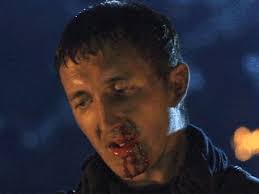 Ralph hurt in the face by Malagant.