"Prank" as many humans as possible.

Keep Charlie as his only friend (failed).

Ralph is one of the major (episodic) villains, in We Bare Bears. This Yeti is memorable because of his brute and sometimes too cold-blooded behavior to humans. He is the main antagonist of the episodes "Ralph" and "Ice Cave".

He was voiced by John DiMaggio, who also voiced Dr. Drakken in Kim Possible and Bender in Futurama.

Ralph is extremely overconfident, not considering the well being of others to the point he would even be willing to kill others for his satisfaction of what he perceives as "fun". He doesn't even care about humans saying there are so many of them and a few of his and Charlie's species and it's not bad to "lose a few" for a "laugh." Ralph does not consider people to be cool to his standards and even left Charlie to die while holding a bridge because he was being a "snoozefest".

Charlie first encounters Ralph after he scares some tourists away. After meeting each other, Ralph agrees to bring along Charlie as his assistant in his pranks. As they roast some sausages at a bonfire, Charlie goes over to the Bear's cave to introduce Ralph. Ralph immediately gets on the Bear's bad side, even going as far as to badly injure Panda. Grizz has had enough and calls Ralph out for his actions. At one point during the argument, Charlie sides with Ralph after he notes that the Bears won't give the Yeti a chance, as he finally found someone else like him. Later on, Ralph has Charlie witnessing the latter in pulling out an old bridge. This terrifies Charlie so much that he holds onto the bridge's planks to save the tourists on the bridge. As Charlie questions as to why Ralph would do this, the Yeti tells him that there are so few of them and much more of the humans that losing a few for a joke is the right thing to do. Charlie disagrees and begs Ralph to help but the Yeti refuses and coldly walks away from the latter. The tourists manage to get off the bridge, and Charlie almost falls to his death, but the Bears manage to save their friend. After Charlie apologizes to the Bears and goes to hang out with them, Ralph hurts a snake by rudely kicking it, angering a swarm of them into attacking the latter.

Ralph returns in the episode "Ice Cave" were he pranks Panda by throwing a water balloon at him, and threatening to beat up Charlie if he didn't play the King of Frost Mountain game with him. Ice Bear resolves this by painfully putting Ralph's left arm in an wristlock and tossing him out of the house. As the Bears shut the door on the Yeti, he swears revenge on the Bears and Charlie for kicking him out. Later that night Ice Bear attempts to get some rest in the refrigerator, but Ralph sneaks up on the latter, stuffs him in a bag, and traps him in the tub all the while setting the temperature to freeze mode and breaking the knob. The next morning, the Bears and Charlie wake up to notice their house is encased in ice. They hear an evil laugh and notice Ralph sitting on an icy throne were he reigns as king. He forces Charlie to watch over a half-frozen Ice Bear while he makes Grizzly and Panda his unwilling servants. Charlie eventually finds a hair dryer and uses it to break Ice Bear out of the ice. Ice Bear then attempts to fight Ralph but falls for another trap devised by the Yeti. Ralph immediately notices Charlie and berates his three friends for being losers. Having had enough of Ralph's antagonism, Charlie fights Ralph with an icicle while the latter gets a bigger icicle to smash the Sasquatch with. Just as Ralph is about to smash Charlie to death, the Sasquatch crushes the cheese puffs into powder and blows it into the Yeti's eyes, blinding him and causing him to fall off the throne into a wall. After Charlie saves Ralph from an icicle that was about to impale him, it seems like Charlie was about to finish off the Yeti. Turns out, he spares the latter and politely tells him to leave. Ralph nonchalantly storms out of the cave, all the while stating that Charlie and the Bears are nerds. 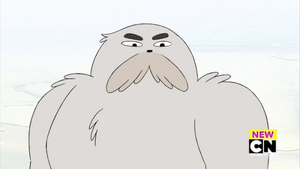 Ralph's evil glare.
Add a photo to this gallery

Retrieved from "https://villains.fandom.com/wiki/Ralph_(We_Bare_Bears)?oldid=4091453"
Community content is available under CC-BY-SA unless otherwise noted.