Ralph (full name: Ralph Fitzpatrick) was the brother of Merthin and one of the main villains in the live action series "World Without End". Though he starts out as a decent enough individual, following his apprenticeship to Sir Roland he steadily becomes a crueler and more unpleasant person, eventually becoming one of the most evil characters in the entire show.

Ralph first appears in the series premiere engaged in a practice spar with his brother Merthin, who he beats with ease. Later the two siblings father is arrested and hanged for treason, forcing them to seek out a master to apprentice themselves to.  Sir Roland (the same man who had their father arrested and hanged in the first place) decrees that the two siblings must fight and that the first one to draw blood becomes his apprentice.  Ralph wins the fight and is subsequently made Sir Roland's apprentice. Afterwards he adjusts to his role fairly well, among other things flirting casually with another man's fiancee and being quite inclined to do Sir Roland's dirty work. This ultimately includes enforcing the Queen's order to cease in the rebuilding of Kingsbridge's only bridge into the town. When one of the workers vocally condemns Ralph's actions against his own town, Ralph kills him on the spot, though he also seems to be somewhat unnerved by what he has just done.

Following the above Ralph is put in charge of a neighboring farming village, and denies Wulfric his father's land and inheritance out of spite for Wulfric's previously attacking him.  Wulfric's lover Gwenda attempts to win it back, only for Ralph to trick her into having sex with him under the false promise that he will return Wulfric's land if she indulges him. He does not. After overhearing Annet (Wulfric's former Fiancee) making dismissive comments about him, he rapes her in retaliation.  He also takes wool from Kingsbridge to support the war with France, ignoring the townspeople's protests and punching his own brother repeatedly when he tries to stand up to him.

He is later arrested for his raping Annet, and is found guilty. Though he is to be hanged (and also castrated beforehand), he is saved from death by the arrival of King Edward III, who offers to pardon any criminal who agrees to fight for him in his war against France. Not surprisingly, Ralph agrees.

Following a period of time serving in King Edward's army he returns home, only to find that the woman he previously lusted after is now disgusted and repulsed by him due to his previously raping Annet and now wants nothing to do with him. Ralph subsequently becomes crueler still, horribly oppressing and mistreating the peasants serving under him. When he learns that the peasants have chosen to farm on now abandoned priery lands, he becomes enraged and threatens to murder Gwrenda and Wulfric's son if they do not return to his lands. He then beats Wulfric and intends to have him hanged, but Gwenda incites a rebellion and saves her husband's life, whipping Ralph's peasents into a frenzy by pointing out his previous grievances against them, including his raping Annet. The peasants overwhelm and kill Ralph's thugs and force him to flee. Going to Petranilla, who he learned earlier was his actual mother, he seeks her aid. Together, the two manipulate Queen Isabella into allowing Ralph to exact brutal retribution on his peasants, also allowing him to succeed Sir Roland as earl. Upon becoming earl he blackmails his former muse into marrying him, only for her to commit suicide to escape marriage to a sadistic rapist and murderer.

Upon learning that Sir Thomas is in fact King Edward II alive and well, and that Kingsbridge has been freed of Priery control, Ralph and Petranilla use this to convince Queen Isabella to order the city razed and it's inhabitants slaughtered. Ralph leads the initial attack on his former town, completely remorseless over his betraying his entire city to the king's wrath. He personally leads the first wave of Edward's men, mercilessly cutting down any who get in his way, as well as killing Gwenda's brother. Confronting his hated brother Merthin, Ralph engages him in a sword-fight one last time, and manages to win (It should be noted, that the only reason why Ralph manage to defeat Merthin, was because he fights in a cowardly way). However, before he can deliver the death blow, Gwenda's son, using his uncle's discarded bow, fires an arrow that hits Ralph in the back of his head, killing him.

Even before becoming clearly villainous, Ralph always seemed to be possessed of some level of arrogance, as shown with his gleefully besting his brother again and again during their practice spar. Notably though he seemed to also care about his brother, as it was suggested that he wanted Merthin to know how to fight properly. Following their being forced to fight for the right to become Sir Roland's apprentice, the two brothers do not see each other again for years. Subsequent interactions between the two siblings are typically hostile and unpleasant, including when Ralph savagely beats his own brother later on just for standing up to him. Their rivalry comes to a head when Ralph attempts to murder Merthin during the Battle of Kingsbridge.

After becoming Sir Roland's apprentice Ralph's arrogance increases, to the point that he openly flirts with the fiancee of a married man and later cruelly denies Wulfric his inheritance out of spite for Wulfric's attack on him. His capacity for cruelty is also shown when he murders an innocent man simply for condemning him, though notably here he seems to be somewhat unsettled by what he has just done. He also earlier expressed doubt at the plan of ordering Kingsbridge's population to cease in their attempts to build a new bridge, suggesting he still had some measure of loyalty to his old town. This was later disproven however when he casually commits what amounts to theft of the town's wool for the war and savagely beats his own brother when he tries to stand up to him. He also tricks Gwenda into having sex with him and later rapes Annet simply because she wounded his pride, showing that whatever moral standards he may have had previously have by this point been abandoned, especially when he refuses to accept responsibilty for his actions and instead attempts to lie his way out.

Following his return to Kingsbridge Ralph descends even further into villainy, horribly mistreating his peasants and threatening to kill a child just to maintain order and obedience. When King Edward III attacks Kingsbridge he personally leads the first wave and shows no qualms about slaughtering innocent people, including women and children. By this point he was openly cruel, callous, merciless and sadistic, and now lacks anything resembling redeeming qualities. In short, he was completely evil.

He also had no guilt or remorse for any of his actions, and was also a sociopath, and cowardly; he was only brave when he had the advantage. Due to his arrogance, Ralph did not learn from his mistakes. These negative traits of his are what led to his deserved death. 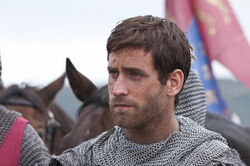 Ralph as a member of King Edward's army 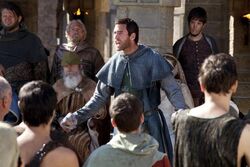 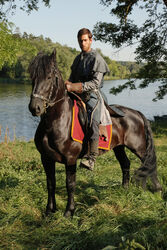 Ralph and one of his men out hunting
Add a photo to this gallery
Retrieved from "https://villains.fandom.com/wiki/Ralph_Fitzpatrick?oldid=3569539"
Community content is available under CC-BY-SA unless otherwise noted.