Don't Give Up the Sheep

Eat the sheep in the meadow

Ralph Wolf is the titular main antagonist from the Ralph Wolf and Sam Sheepdog shorts of Looney Tunes. Ralph is actually an employee whose job is to steal sheep, while Sam's job is to watch over the sheep. Ralph and Sam are best friends when outside of their jobs, only antagonizing each other during their workday. While on their job, Ralph tries various plans to steal the sheep, only for Sam to thwart him with minimal effort and severely punish him. As their workday ends, they return to their status quo, walking home together only start all over again the next day.

Outside of job, Ralph is friendly with his neighbor, fellow worker and best friend, Sam Sheepdog. After the final whistle, Ralph and Sam return their status quo and return home. Even with his injuries, he still consider Sam as a pal after being told to take a day off for Sam handling both jobs.

Inside of getting a job, Ralph wanted capture and eat sheep, only got beaten by Sam. He attempted to get rid of Sam for the sheep. 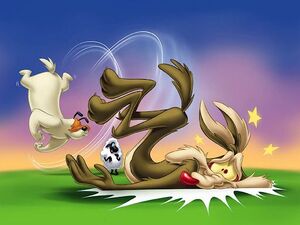 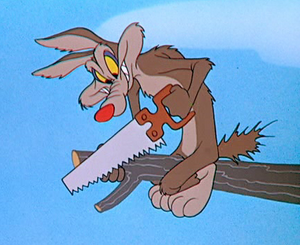 Retrieved from "https://villains.fandom.com/wiki/Ralph_Wolf?oldid=4074246"
Community content is available under CC-BY-SA unless otherwise noted.