Eat and kill all humans that it comes across.

Ramón is the main antagonist of the 1980 horror film Alligator. It is a large alligator that went on a rampage in Chicago.

A teenage girl buys a baby American alligator while on vacation with her family in Florida. After the family returns home to Chicago, the alligator, named Ramón by the girl, is flushed down the family's toilet by her father and ends up in the city's sewers. While growing in the sewers, Ramón survives by feeding on pet carcasses that were tested for an experimental growth formula with the intention of livestock growth production. This caused Ramón to mutate and grow into a 36-foot long monster gator, longer and larger than the world's largest saltwater crocodile.

Ramón starts devouring sewer workers that it encounters in the sewers leading to bloody parts being found. The resulting remains draw in police officer David Madison who goes down into the sewer with his partner Kelly to search for clues. The gator attacks and kills Kelly while David escapes. Because no trace of Kelly is left behind, nobody believes his claims on the gator. Eventually, Ramón breaks out of the sewer and kills a police cop and a young boy who got thrown in a swimming pool. A big-game hunter named Colonel Brock is sent out to track Ramón. The effort fails and he gets eaten. Ramón then goes on a rampage at a wedding at Slade's mansion. After the wedding massacre, David lures Ramón into a trap and kills the gator with explosives and escapes almost getting killed by the explosion. After the explosion, a sewer drain spits out another baby alligator, meaning that the cycle will start all over again. 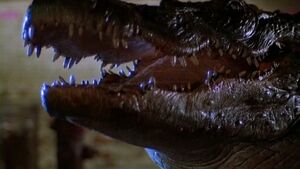 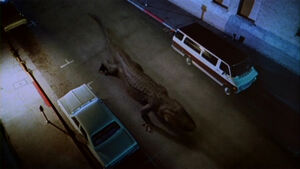 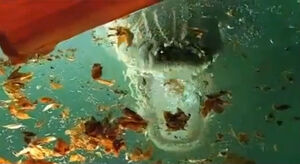 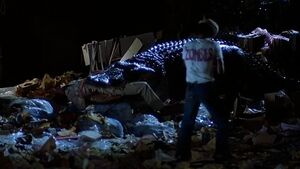 Retrieved from "https://villains.fandom.com/wiki/Ramón?oldid=4222783"
Community content is available under CC-BY-SA unless otherwise noted.