Fighting in war with his Gouf.

Defeat the Earth Federation in the One-Year War.

Ramba Ral is an officer within the Principality of Zeon and a major antagonist in Mobile Suit Gundam. He is an ace pilot in the Space Attack Force nicknamed the Blue Giant for his blue Gouf mobile suit.

He was voiced by Masashi Hirose in the Japanese version, and by John Payne, Michael McConnohie and Steve Olsen in the English version.

Ramba Ral was the son of Jimba Ral, a prominent supporter of Zeon Zum Deikun who took in his two children following Deikun's mysterious death.

After joining the Zeon military, Ral first made a name for himself in the One Year War for his heroics and ace piloting skills at the Battle of Loum, where he earned his nickname of the "Blue Giant" for the blue Zaku I he piloted.

Ramba Ral and his forces pursued the the White Base as it traveled across Central Asia. He attempted a second attack on the White Base, though it ended in both of his wing-mates being taken out.

Ramba Ral and his men later encountered Amuro Ray in person in a cafe, not realizing that he was the pilot of the Gundam. They also notice Amuro's friend Fraw Bow and recognize her as a Federation soldier, though Ral decides to release her so they can follow her back to the White Base and pinpoint it's location. Once the White Base has been detected, Ral and his men launch a surprise attack during which Ramba Ral in his Gouf engages Amuro in his Gundam. The two slash each other's cockpits open, revealing to them both that they had just met each other in the cafe. Amuro destroys the Gouf, but fails to kill Ramba Ral, who jumps out of the cockpit hatch before he can be consumed by the explosion.

Ramba Ral was later told by Dozle Zabi to contact M'Quve to request support but M'Quve, more concerned about his mining operation, failed to supply Ramba Ral with the new Dom mobile suits. Believing that it is his duty as a soldier to do whatever he can to carry out his mission, Ramba leads his men to attack the White Base close-quarters-combat. After managing to board the ship, Ramba Ral encounters Sayla Mass and realizes she is Artesia Zum Deikun. Letting his guard down, Ramba Ral is shot by Ryu Jose, prompting him to retreat to the White Base's secondary bridge where he locks himself in. In response, Captain Bright orders Amuro to destroy the secondary bridge. After Amuro tears a hole in the wall, Ral prepares a grenade and jumps out at the Gundam, exploding in one last attempt to take it out. 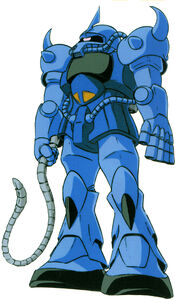 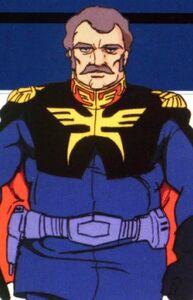 Retrieved from "https://villains.fandom.com/wiki/Ramba_Ral?oldid=4101947"
Community content is available under CC-BY-SA unless otherwise noted.