Soldier of the US Army Special Forces/Green Berets (Formerly)

Kill those who come after him. (Succeeded)

John James Rambo is the main protagonist of the 1972 novel First Blood and its 1982 film adaptation. While he was portrayed as a more heroic character in the film, the novel portrays him as a ruthless, psychotic murderer and unlike the movie counterpart, this version of Rambo slaughters innocent people.

John James Rambo was born in July 6, 1947. He lost his mother at an early age to cancer. His father was a very abusive alcoholic who constantly beat Rambo. One day his father, in a drunken rage, attempted to stab his own son with a knife and Rambo was forced to shoot his father with a bow and arrow to defend himself, nearly killing the abusive drunkard. Rambo then ran away from his father and his home altogether.

After dropping out of high school and drifting from one meager job to another, Rambo enlisted the army (although he keeps on saying he was drafted). It is hinted that Rambo joined the army and became a Green Beret not because he believed in a noble cause such as patriotism, but not without much thought as it was merely another job for him, nothing more.

He was deployed to Vietnam in 1966, doing his one-year tour before returning in 1967. Once returned, he became Green Beret, stationed in Fort Bragg and was assigned to Captain Sam Trautman.

Rambo was redeployed to Vietnam in late 1969 as a member of Studies and Observations Group (SOG) brigade. Rambo's team was coded as Bakers Team consisting of eight men. Then, during a particular mission in November 1971, Rambo's unit came under surprise attack by North Vietnamese Army (NVA or Viet Minh). Rambo and some other members of the team who survived the NVA ambush were overwhelmed and captured by NVA near the Chinese-Vietnamese border and held at a POW camp, where they are imprisoned and subjected repeatedly to brutally inhumane tortures. Only Rambo and another member named Delmar managed to survive and escape captivity in May 1972 after drifting jungle and mountain for many days, if not for weeks before their eventual rescue. By his own request, Rambo was immediately re-deployed afterwards. Rambo finally received his official military discharge on September 17, 1974. It is speculated that he was discharged as an officer.

Upon his return to the United States, Rambo discovered that many American civilians beheld the soldiers returning from Vietnam with contempt and disgust, and he claimed that he and other returning soldiers were subject to humiliation, embarrassment and insults (that famous "baby killers" line). Rambo finds himself being excluded from society. His ordeal in Vietnam and back home resulted in an extreme case of post-traumatic stress disorder, often causing Rambo to lash out at society rather than handling difficult situations in a "civilized" manner.

Rambo is first introduced hitchhiking through Madison, Kentucky when he is picked up by Chief of Police Wilfred "Will" Teasle who offers him a ride. After conversing with the young man, Teasle decides that it would be best if Rambo does not stay in his town so he drives him to the city limits and asks him to leave. After several failed attempts to return to town, Teasle is forced to arrest Rambo on the charges of vagrancy.

While spending time in a cell, Rambo begins getting flashbacks to his time as a prisoner of war in Vietnam which triggers a mental breakdown. When Teasle asks his deputies to cut his hair, Rambo begins panicking. When a deputy approaches him with a razor to cut his hair, Rambo snaps and disembowels the deputy with the same razor and escapes the police station, killing another sheriff with a gun.

After stealing a motorcycle, Rambo meets a hunter and his son and insists they hide him for the night. Providing him with clothes and a hunting rifle, Rambo proceeds to kill all of Teasle's men during the manhunt for him. Leaving only Teasle, Rambo warns him to leave him alone, a warning to which Teasle does not take kindly. Taking refuge in a cave, Rambo is contacted by his old mentor captain Sam Trautman, who tries to talk him out of the violence, only for Rambo to ignore this and curse Trautman for siding with his enemy. (unlike the movies, Rambo in the novel barely remembers his superior).

Now assisted by the National Guard, Teasle tracks down Rambo to the cave he is hiding in. After deciding to try and wait him out Rambo finds a way out of the cave and escapes. Stealing a police cruiser in an attempt to flee to Mexico, Rambo returns to town when that plan failed and a shootout commences resulting in the deaths of many civilians, policemen and national guardsmen. Too heavily wounded to continue fleeing, Rambo resorted to blowing himself up with dynamite, but changed his mind when he figured that suicide is a dishonorable way to die as a soldier: he resolved to die in a battle. So ultimately it came down to just Rambo and Teasle, they manage to mortally wound one another. Acknowledging he is going to die, Rambo tries to get Teasle to finish him with honor by returning fire in the hopes Teasle would finish him off. To his dismay, Teasle is fatally hit but ends up missing Rambo and begins to bleed out. Now with what little of his strength left gone to even lift the dynamite, Rambo began to despair. Then, Trautman came from behind Rambo and blows Rambo's head off with a shotgun. Receiving the death he wanted, Rambo dies satisfied while showing remorse for his actions against the town. Teasle was to join him in death shortly thereafter. 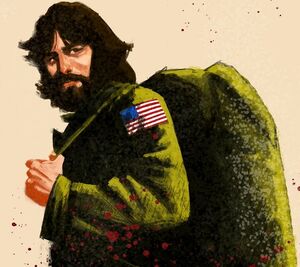 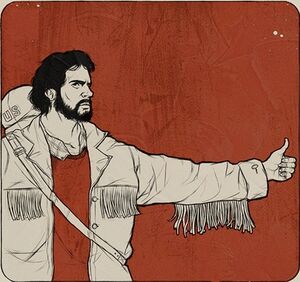 Retrieved from "https://villains.fandom.com/wiki/Rambo_(novel)?oldid=4225297"
Community content is available under CC-BY-SA unless otherwise noted.